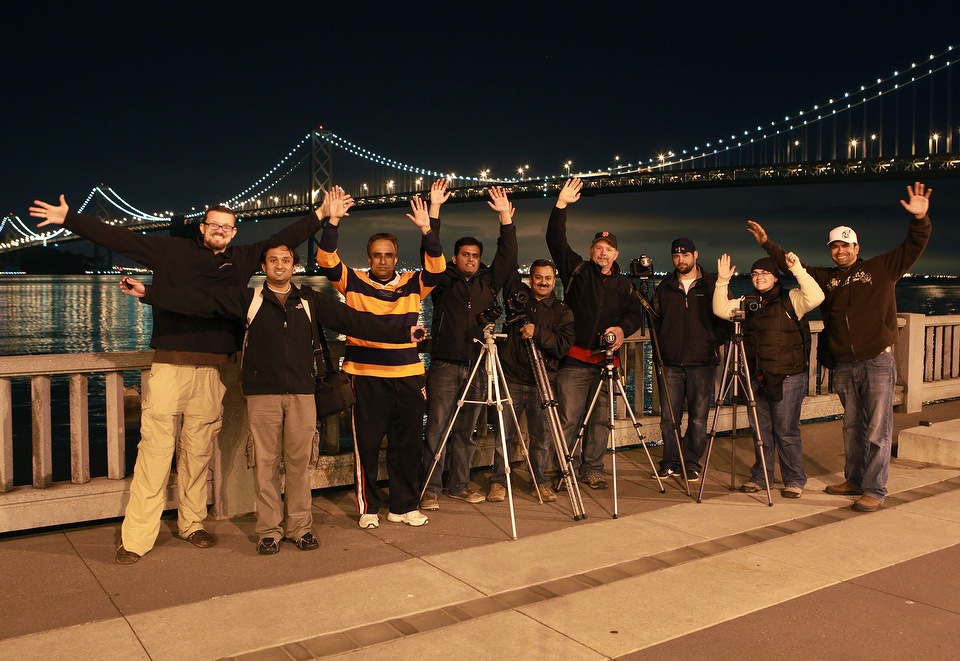 Many photographers spend their time shooting from the hours of noon and sunset. They see sunset as the culmination of the day for photography. Night time is spent sleeping and letting the camera take a breather. For them they never even consider photography at night. Others have an interest in night photography but either the skills or the thought of braving the city at night seems overwhelming to them, and they never venture out. That's where we step in. We're the Aperture Academy.

We take groups of adventurous students with a desire to learn and have fun on adventures into San Francisco for an evening of night time photography.

A group of 8 people met instructors and professional photographers Brian Rueb and Tony Medina on a windy Baker Beach for the Night Owls photography course. The course begins with a short orientation so everyone has a chance to meet the other students, learn a bit about the instructors, the plans for the night, as well as let the teachers know what it is they really want to focus on (pun intended) during the night. The students come with a variety of skills levels and instructional needs. Some are beginners wanting to soak up as much information on everything as possible. Other students have been shooting for a few years and really want to put effort into composition and how to set up shots. We take the students where they are and work with them personally to help them achieve the goals they have set for themselves.

When Orientation has completed, the class heads out on to the beach for a little while. The spot is interesting for sure. We never know what we're going to see on one of our workshops on Baker. Photographically the spot is ideal for instructors to give out some beginning tips on aperture and shutter for the beginners as well as instruct on some of the basics of composition. It also gives our instructors a chance to see what gear our students have and maybe help familiarize them with what the different settings are for. We shoot entirely on manual in our workshops, and for some students that concept is scary….it's our mission to ease the fear and send them off understanding more of what their camera can do. 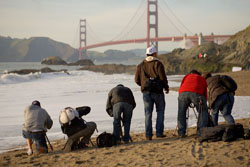 Baker Beach is a nude beach during the warmer days. We give a disclaimer in orientation to prepare people for the possibility of seeing some naked people (usually men) hanging out (no pun intended) on the beach. The cold weather, we thought would distract folks from shedding their clothing on this night…but we were wrong. A couple ladies were in their birthday suits tromping around the beach for a photo shoot of their own. We deal with the nudity as best we can and still were able to get the shots we were hoping for.

The second stop of the night was a bluff overlooking the Golden Gate Bridge. During these longer spring days, we're able to squeeze in other stops we normally aren't able to make due to light constraints. Even though this is a night photography class, it never hurts to spend some time trying to capture that last bit of light as it hits the Golden Gate. Even though the sunset wasn't spectacular, and the wind on the bluff was cold and biting, it was a good place to work on using vertical composition to capture the beauty of the bridge.

We arrived at the next stop just as the sun had set and the blue hour began. The palace of fine arts is beautiful. Nothing quite prepares you to see the golden lights of the architecture as the classical looking building reflects and shimmers in the pond in front of it. The beauty of the blue hour makes for a nice complementary compositional element with the orange and gold of the structure. We also spend time really starting to work on the longer shutter speeds to capture the best of the scene, and really make the reflections pop out, while keeping some of the scene's brighter areas under control. While we worked with our class fire jugglers practiced near us, and the scent of burning kerosene filled the air. Naked ladies, and fire jugglers….this evening was really shaping up to be interesting. 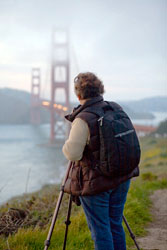 We spent some time on the inside of the Palace dome shooting the interesting patterns and statues. This is a great spot for getting out of the wind, as well as working on more close up detailed shots of the scene. Many people view subject like this on a large scale, and forget to really stop and pay attention to the colors, repetitive shapes, and details of the scene which can be just as nice and interesting..

Lombard Street was next on the agenda…and it's a perfect spot to use the long exposure to really allow for some streaking lights of headlights and taillights to help put composition leading line curves in our images. Brian showed the class the t rick of using a hat or cloth to cover the shutter after one set of headlights had passed so that future cars wouldn't distract the image by burning out the scene by adding more sets of headlights which are much brighter than taillights and can blow out a foreground very easily. The hat covers the shutter and lets 2nd and 3rd cars pass and not affect the exposure…when the cars have passed the hat comes off and more light is allowed to reach the darker areas of the scene and give a better overall exposure. Lombard Street is ALWAYS a fun spot for the class as we try to time cars and laugh at the occasional car that stops in the middle of our exposures to ask us all what we're doing…and thus ruins that shot. "we're photographing, and you just ruined the shot!" 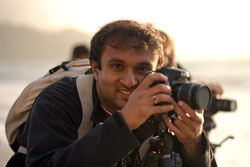 We take a short break in North Beach to soak in some of the sounds of downtown SF at night, as well as get a cup of coffee or a snack to recharge us for the final hour of the night….the Embarcadero.

The view of the Bay Bridge from the Embarcadero is stunning. It's one of our iconic signature shots at the gallery, and people just love to know how it was captured, and when we tell them exactly how it's done and let them come away with a version of their own…for many, it makes the entire night. The location is also the point where they can really put together everything they've been learning all night and start to focus on putting their own unique twist on the spot. We certainly see a bunch of new ways to shoot this bridge every class. This class had unique verticals as well as some really nice close up more abstract views of the reflections and old pier parts. This is what makes the instructors job so fun, SEEING people's visions come to light (pun intended)

When the class had finished capturing the bridge it was time to get everyone back to their vehicles so they could set off back home to recharge their batteries as well as get a good night's rest….night photography isn't for everyone…but for those who put in the effort and succeed….it sure is rewarding.

Until next time...Brian, Tony and the rest of the Aperture Academy team!