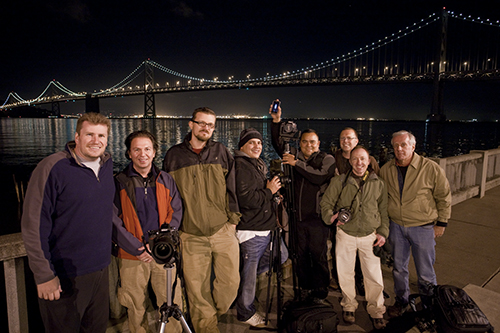 On Friday, February 19th, a group of determined photographers abandoned their bedtimes and set out in San Francisco for an evening of Night Photography with the Aperture Academy. At 5pm, Instructors Stephen and Brian met the group (who all arrived promptly) at Baker Beach.

The sky was looking great, and the group spent close to an hour working on various shutter speeds capturing the moving surf. With such an iconic view of the Golden Gate bridge, it seemed funny that a majority of the time was spent photographing a lonely rock that had been uncovered on the beach. However, it provided the best anchor to our images and it was located in prime real estate to show off some of the tremendous color in the clouds.

With most everyone having taken on some water in the process of capturing their images, they sloshed their way back up the beach and loaded into the cars to get to the night photography portion of the trip. First stop was the Palace of Fine Arts.

Stephen's group arrived first, while Brian's car took the more scenic approach. Both groups DID arrive safely and spent about an hour photographing the great reflections of the dome and pillars in the pond. The lighting for this location is tricky, and instructors helped the students use filters to balance out some of the harsher light, coming from the dome, with the more subtle light, in the reflection and surrounding architecture. The clouds from sunset were making their way into the city, and many of the student images showed some of these clouds, which really gave them a nice extra boost of interest. 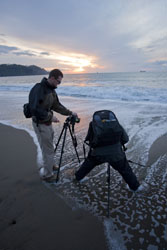 San Francisco has some crazy roads...but none more so than Lombard St. There is a one mile section that has more crazy twists and turns than a bad suspense novel. Our group parked (semi-legally) and walked from the bottom up, looking for curves we could use to create "s" patterns in our images that would draw the eye through and give interest to the frame. Views of Coit Tower in the distance gave the top portions of our images a recognizable structure to really balance out the scene. We used long exposures, timed with the traffic, to give light streaks in the curves which gave the "s" curve even more dynamics and interest.

With only a minimal amount of questionable driving, both parties left Lombard St. and found their ways to the Embarcadero, where the instructors had two spots for them to photograph. One was from the end of Pier 14, where the lights and railing provide many creative ways to use line as a leading element into an image...it also provides views of the Bay Bridge, as well as the skyline along the Embarcadero.

The second location was photographing some old pilings located along the seawall with the Bay Bridge behind them. We used very long exposure there to blur the water, and really make the images shine. While this view has become somewhat iconic among landscape photographers, it's always impressive to see, and makes a nice image addition to any portfolio. 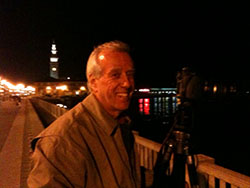 We saw the downtown skyline up close and personal from the Embarcadero, and then moved off to Treasure Island for our next two locations to see it from a bit farther away. A short walk from our parking spots brought us to an amazing view of the city...storm clouds rolled in creating very dramatic skies...and the Bay Bridge went from being the dominant figure in our images to being a leading line and a complimentary role in the images we created there.

The second view from Treasure Island was located directly above the Bay Bridge, looking down...which put it back as a more dominant role in the shot. We used long exposures to create streaking lights in the traffic, and to give us more leading lines into the scenes, many of which were composed vertically to help really accentuate the vertical towers of the bridge.

Our final spot for the night was a different view of the Golden Gate, from the cliffs near the Presidio. We walked out on the cliffs and worked on creating more vertical images, using the surf as our dominant line in the image with the bridge being our main subject for the top portion of the frame. While the weather report listed the chance of rain at 50% for the evening, the group never saw a drop. The only thing falling that night was the amount life left in camera batteries, and the free space on memory cards.

The clock struck midnight and our group disbanded, with everyone heading off in search of some much deserved sleep. Conditions couldn't have been better, and both instructors left vey impressed with the quality of the images the group came away with...and the degree of creativity and personal style that was put into them. Great job!

Stephen, Brian, and the rest of the Aperture Academy team