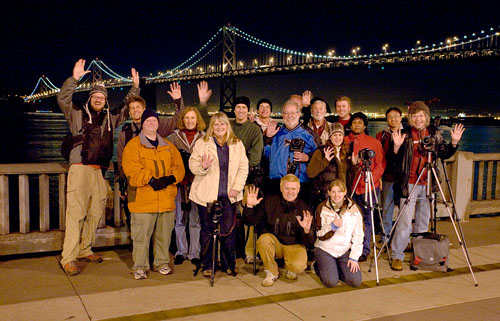 Night in San Francisco, the lights come one and the city takes on a different vibe than it has during the day. It’s really magical to see and we always get asked, “How do you take a photograph of this?” It’s why we began our Night Owls class and why 14 new faces showed up on Baker Beach on a Friday evening to meet instructors Stephen Oachs, Brian Rueb, and Scott Davis. They wanted to learn how to take what they saw with their eyes and have it come across in their photographs…

Even though the Golden Gate Bridge was covered in a thick fog while the crowd was assembling…by the time our introductions and orientation finished the fog had blown out and the bridge was visible and ready to be photographed. What better way to begin than walking down the beach and getting some shots of the Golden Gate Bridge. The first location, while iconic and photogenic gives the instructors some time to get to know the class and help them with some of their immediate concerns and questions so that when we move on to the better locations they can focus more on images. 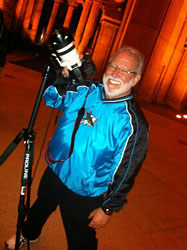 The first stop we make after the bridge is at the Palace of Fine Arts. As timing would have it the night of our class was the first night the palace had been completely opened after removing the scaffolds from months of repair. In the past only the center dome portion of the palace has been lit, which still looks great but pales in comparison to the scene when the entire palace is glowing, and reflecting in the pond in front of it.

Normally our group is confined to the walkway around the pond…but with the whole area finally opened up, we were able to get under the dome and explore some more intimate settings in the palace which created some of the more dynamic and interesting images created during the first part of the evening.

The third stop is Lombard Street- One of the most iconic streets in the United States. Twisting and turning over a cobblestoned half mile the road creates perfect opportunities for our class to work on capturing light trails as cars slowly navigate the curves. The curves of the road also lend themselves perfectly to creating ‘S’ curves and leading elements to guide the eye of the viewer through the image. In addition to the technical aspects of long exposure we can learn here, composition is very important and many of our more advanced students want to work on their composition as much or more than the technical aspects of photography.

By this point in the night everyone is fading a bit, and ready for a break to get a bite to eat or a warm drink…we take a small stop in the heart of North Beach where we can grab a snack and spend a few moments people watching before heading out to the final spot of the night…The Embarcadero.

The view of the Bay Bridge from the Embarcadero is fantastic and the most iconic view of the bridge for photography. For many, it’s the shot they’ve seen many times before but never knew where or how it was created. To see the joy on the students faces when they finally find the spot and have their own image of the scene is one of the best parts for our instructors during the evening. We spend a good amount of time here to allow the students’ time to experiment with composition and exposure and make sure everyone has something they’re happy with.

When the time comes for us to leave everyone has had a full night of shooting…many are up way past their bed time. The effort has been worth it. For many this was their first attempt going out in the city to try their hand at night photography. Being able to spend that time with professional instruction and like-minded photography enthusiasts in a safe environment is well worth the loss of a couple hours of sleep at least until the next night when they stay up past their bedtime processing their images…

Brian, Stephen, Scott and the rest of the Aperture Academy team!