Golden sunlight on a breezy, cool evening greeted a group of eager photographers at Baker Beach in San Francisco. Aperture Academy instructors Scott Davis and Jean Day welcomed five returning students and eight new faces for photo fun and education in the world of night photography. Scott began the evening giving everyone a chance to introduce themselves to find out where each person was in their technical skills and knowledge of their gear, and to hear what they hoped to learn in order to better tailor the night to their individual needs.

As the fog lingered off shore, Scott and Jean led the group down to the beach to begin with some basic shooting tips and knowledge that would help the students through the night. Composition, shutter speed, depth of field, and the use of a polarizer were first on the agenda and our instructors had the opportunity to familiarize themselves with the students' particular set-ups to assist them in capturing the best images possible. After a warm up on the beach getting shots of the Golden Gate Bridge, it was time for everyone to climb aboard the ApCab for a trip over to the Palace of Fine Arts.

Arriving just before blue hour, a time after sunset when the clear evening sky deepens to a cobalt blue, students learned to capture the golden columns and dome of the Palace as it reflected in a pool of water with the deepening light of the sky above.

Photographing at night requires longer exposures and the use of tripods and remote shutter release capabilities. Students were given tips and instruction on white balance to tame the warm lights of the building and increase the color of the sky as well as varying compositions and shutter speeds for different effects.

The group then made their way to the dome where, as is usually the case on a Friday night, they were treated to a local roller-blading group, complete with boom box and lots of colored lights attached to their clothing. Our photographers enjoyed capturing them as they skated beneath the dome and experienced their first attempts at shooting the long light trails created using longer exposures. As the skaters went on their way, the tall columns, highlighted arches, and patterned ceiling made for great abstract shots and challenged all to look for a different point of view using the long, leading lines.

Photographing the city at night can be a magical experience and after a brief stop for a snack the crew headed over to Lombard Street for some fun shots of car lights trailing down this famously winding drive.

Scott and Jean divided the group to allow time for shooting at two locations and with the tools and skills needed, they were able to bring out the glow and mystery of night scenes not readily seen with the naked eye. Higher up on the street, students were able to capture the streaming tail lights of cars over 30 second exposures with the iconic landmarks of the city in the background. Further down, another group were photographing the headlights as the cars careened around the curves accenting tall buildings surrounding this brick lined and well manicured street. 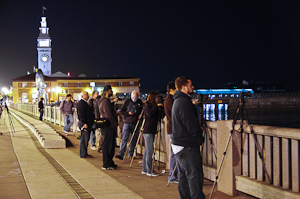 For our final outing of the night, the group traveled over to the Embarcadero to capture the iconic Bay Bridge with the old pier pilings in the foreground. At this point, the students put into practice the skills learned through the evening in order to create images using multiple minute exposures. Creative use of white balance and depth of field were used to capture the bright bridge lights of the background and the foreground pilings bathed in ambient light from the surrounding city.

Expressing excitement of new experiences with the magic of night photography, Scott and Jean returned the students to their vehicles well after midnight, tired but eager to continue using their new skills at every opportunity.

As always, Scott and Jean and the entire Aperture Academy team thank you all for spending your evening with us, and wish you further success as you continue on your photographic journeys.