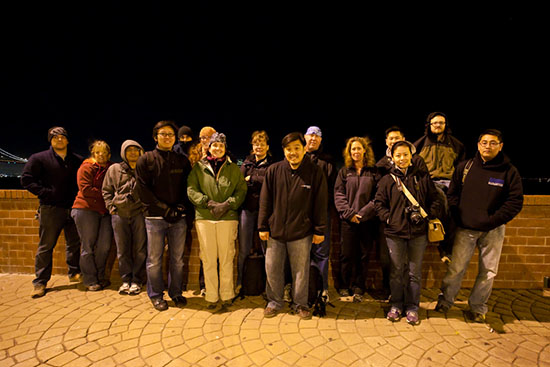 Night time and urban landscapes are fast becoming two of the most popular subjects in photography. It seems everyone wants to get out and give it a try, and what better place to do it than the Aperture Academy's Night Owls workshop? On a brisk Friday evening, thirteen photographers and two instructors, Brian Rueb and Scott Donschikowski, assembled on Baker Beach in San Francisco for a night of instruction, photography and fun. 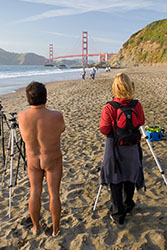 As typical for a Night Owls workshop, class began on the beach, where instructors were able to get to know the students a little more, find out about their gear and goals for the evening. The surf was very low, as was the population of the naked beach goers, so the class was able to really utilize the surf lines as strong leading elements into their compositions. Even though there weren't the numbers of nude people on Baker as there are during warmer days, one that was there was quite friendly and willing to converse with our group, even if he did kind of creep us all out. 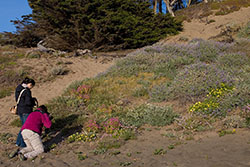 Spring is a great time to see wildflowers along the California coast as well, and Baker Beach still had plenty of nice flowers for students to photograph. At this time of year the sun sets later in the day, so we have plenty of time to photograph as well. We decided to leave the beach and head farther north to try our hands at grabbing some sunset shots of the Golden Gate from a higher vantage point. 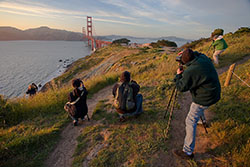 Even though summer is approaching, that doesn't mean that temperatures are warming up in the city by the bay. The hillside we shot from was absolutely chilly, and a good 30-40mph wind helped ensure that everyone knew it was cold. But it was certainly fun to wander the area setting up compositions, and discovering how sturdy one's tripod actually was.

The sunset was beautiful, which helped take away some of the chill. While wind isn't fun to photograph in, that weather does present opportunities for learning. How do you compensate for wind with photography? We used the chance to show students how to increase ISO and adjust their aperture and compositions to get the most out of the area without having wind shake. 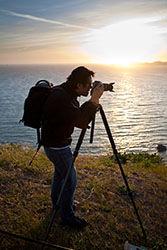 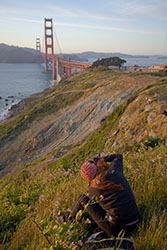 When the sun had set, and the class had taken a few images of the bridge with its lights on, it was time to move inland to the famous Lombard Street. While this area wasn't warm, it certainly was more comfortable than the cliffs we'd just shot from. The goal of Lombard Street is to work on using a combination of light blurs from the traffic and the incredible architecture of the area to create an interesting, almost surreal image. The images the instructors saw from this location were great.

The class really had fun wandering up and down the curvy street, looking for just the right composition. The traffic was usually right on cue, giving us plenty of chances to try and photograph the blur of lights as they creep and curve.

One funny moment involved a car that the class was photographing, STOPPING right in the middle of our exposures and getting out to talk with us.

"What are you photographing?"

"YOU...get back in and keep driving!"

The traffic even kept coming when we DIDN'T want to. Brian spent several minutes trying to find a clear point in the traffic to use two colored headlamps to try and "paint" some interest into people's compositions. Sometimes it worked, other times cars interfered, but it was always fun to watch, and experience. 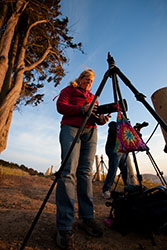 When Lombard was finished with us, and we with it, we were off for a brief break in the hustle of North Beach where the class could grab a coffee, or snack before we set off to photograph the Bay Bridge from the Embarcadero.

The spot is iconic, and every student loves the chance to photograph it and put their own little twist on composition, or style. Whether it's tweaking the white balance, working on an HDR type image, or just switching the camera from horizontal, to vertical, everyone enjoys this spot. The instructors choose this area to really work on using higher apertures and longer exposures to give the images the maximum "WOW" factor. The pilings in the water really make for an interesting foreground, which gives these images that extra push and makes them so memorable. 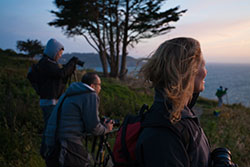 Time was flying, it was now almost midnight...and we still had more to shoot!

The last stop of the evening was Treasure Island. We took our required group shot, and then set off on a small hike along the freeway to a special little vantage point overlooking the Bay bridge, and San Francisco skyline. It gets crowded on that little perch! I can't imagine what it looks like to passing cars seeing fifteen people with cameras, smushed together on a ledge, at 1 am.

The view is mesmerizing, and everyone really comes away with a variety of images. Whether it's a close up of the bridge, or skyline or a panorama type image showing the whole scene, everyone was entranced with their photography, and we had to remind them that it was past 1am, and class was over. Even though class technically ends at 1, we always stay until everyone has had their fill...and it's usually 1:30 by the time we get the folks back to their cars so they can head home, and get a few hours of sleep before starting the processing all those images they took!