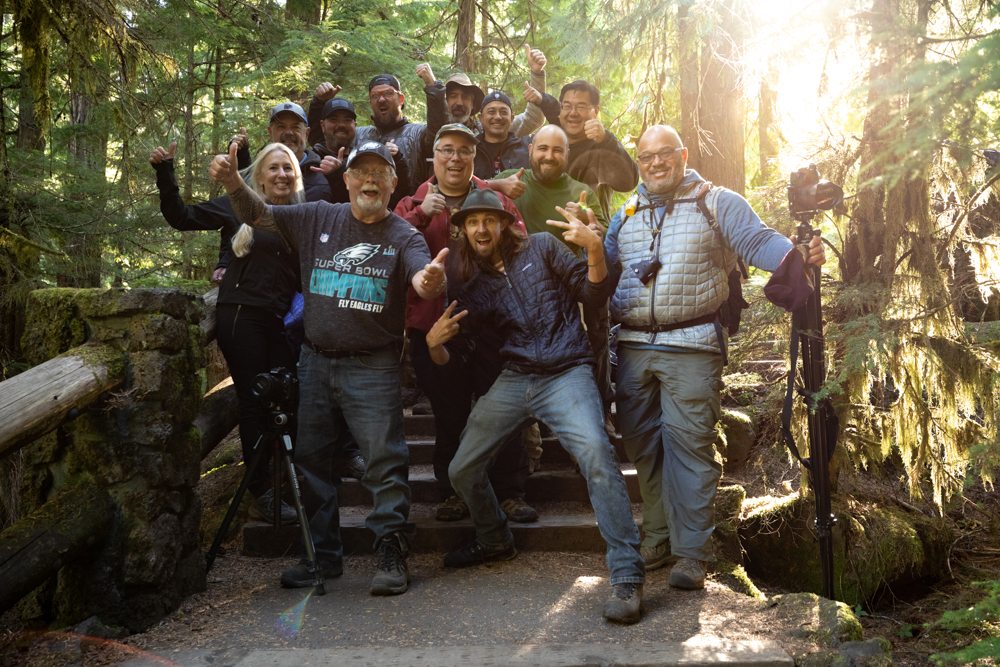 Oregon is a beautiful state. There's no denying that. When most people think of the beauty of Oregon they move to the rugged coastlines, the waterfalls of the Columbia River Gorge, then to Magnificent Mount Hood,. And finally they might, eventually get to Central Oregon. Central Oregon has a little of all those places. Obviously there is no ocean here, but there are magnificent waterfalls, majestic mountains, serene lakes, and even some other worldly badlands to point a camera at. It's about as diverse an area as you can find...and all open for photographing with two full groups of eager photographers.

Mike and I met the group in Sisters, Oregon, a little north of Bend. This would serve as our home in the ponderosas for the four days of our workshops. Orientation lets the groups' know what times we'll rise each day (everyone's favorite) and about what time we'll be back for some much deserved sleep.

The first morning we stop at Smith Rock State Park. This place is a rock climbing mecca, as well as a darn right fun place to photograph. Formed by the ash of long past volcanoes time, wind, and water have formed some massive and interesting rock formations. These formations are snaked by the river which gives a lot of nice elements for photography. While it is possible to get to the rivers' edge, most of the really amazing vistas are from the ridge next to the rock formations. Here we can get river, and rock in the images, and give a sense of scale. Mike and I helped the group to really look for interesting compositions, and try to find what they found most interesting with the location, so they could get shots that conveyed it. Some of our newer digital photographers need more help with the settings, so we're on hand to really help them get those questions answered as well. 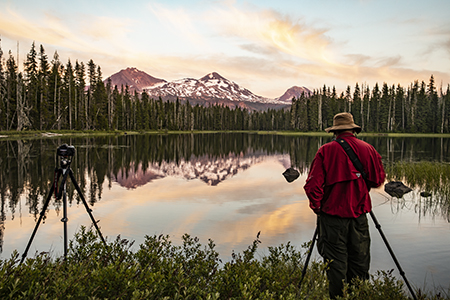 After our stop at Smith Rock, it was time for an interesting stop at ‘Jim's Junction' best described as a pseudo ghost town on the side of the road. It's not worth a long stop, but it's just interesting enough that it warrants A stop. We focus on small details like cracked windows, and little bits of texture in old rusted cars. It's a fun exercise in composition, texture, and starting to think in Black and White.

Our goal for the sunset that evening was Scott Lake. This little gem hasn't quite reached the radar of a lot of the other photographers in the area, but the locals all know it offers up some killer reflections and nice views of the sisters range. Though the forecast didn't call for clouds, we lucked out and head one heck of a nice sunset with the first group, and the light wasn't at all bad for the second group either! MIke and I help point out interesting composition tips, offer up some OFF to combat the bugs, or just talk shop with the group as they wander the lakeside looking for just the right angle. 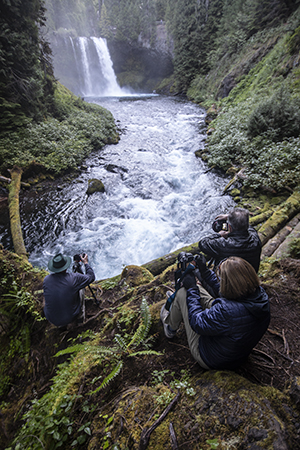 Our second group lucked out and was able to visit the old historical building of Fish Lake. The first group had heard about Jim, the caretaker...but after 2 failed attempts to meet up, we thought it just might be Mike's imaginary friend. Well as group two found out he was real, and super nice. He opened up a few of the old historical buildings for us including the tack room, blacksmith shop, and the old ranger office...we had fun being in these old places and shooting some great images of all the details and little pieces of history. Mike and I encouraged people to use their black and white brains, to try and come up with great images that incorporated detail, shape, and texture as focus.

The next morning we set off for Sparks Lake...one of my FAVORITE lakes in the region. This little lake was formed by lava flows, which created not only a lake but some interesting foreground elements as well. MIke and I had a lot of fun showing our groups the little nooks and crannies this lake has to offer The mornings at Sparks are typically very serene, ands wonderful glassy reflections are often had. TIme to bust out those polarizing filters and really get the best of it!

The afternoon break was a little longer because we had a bit of a drive to our evening and late afternoon location---The Painted Hills. These hills are straight out of Grand Staircase in Utah...so many wild colors and textures here. Stripes of yellow, red, purple, bits of black thrown here or there. There's a lot to shoot here using telephoto lenses, which is something a lot of photographers aren't as used to using.

The play of light and shadow on the hills is awesome, and the evening light really brings out a soft and pastel tone for the colors that look awesome on the backs of those view screens. It's a long day, and everyone is surely tired when we get back...so we do the right thing and let them sleep in until 5am. 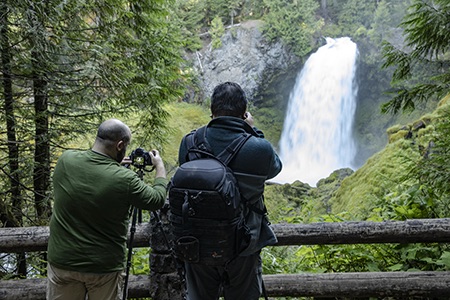 The final full day of shooting we start off with two amazing waterfalls. Koosah and Sahalie Falls. These falls have amazing blue colored water, which is pretty typical for waterfalls flowing in volcanic area. Surrounded by lush green foliage, and moss...both of these falls are beautiful. Mike and I move people from the various vistas to see the falls and help them play with different exposures to see what kind of water blur it is that they find the most aesthetically pleasing. Every photographer is different, just like every waterfall is. What one shooter finds pretty another might not...have to experiment.

Once the sun is past the tree line, and the falls are all but washed out, it's time to head back towards the hotel, but first we make a little stop at the Dee Wright stone observatory on McKenzie Pass. This little historical site is not only cool to photograph, but gives an idea of how vast a lava flow is, and one can imagine how difficult for early settlers to traverse. We don't have to traverse it, so it's an easy van ride back to the hotel for a mid-day rest before our last sunset shoot and a little bit of star photography.

On our way to Sunset we stop at some of the meadows to shoot Mt Bachelor. These meadows have all kinds of little streams, ponds, and other interesting features to help give it some nice foreground, and interesting compositions. We found some nice lilly pads as well that made interesting images all by themselves! 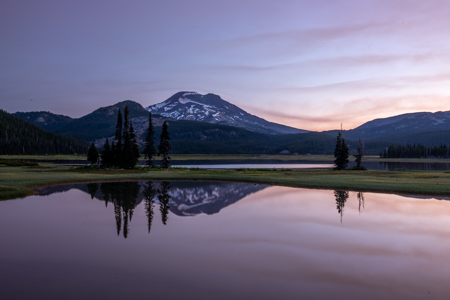 Like I said, Sparks Lake is one of my favorite lakes, and photographically it's just stunning. We have to give it more than one try to make sure we get something good there. This time, after the sun sets we stay around and wait for the stars to come up. Then it's time to let people have just a little taste of how this kind of photography is done, and the different options one has when shooting stars for themselves.

It's another late night so the following morning we meet a little later and work on some post processing with the group. Here students can show off their prize winning photos, or get any questions on composition asked, problems with exposure solved, and learn a few of the tips and tricks Mike and I have been learning in our many years in photography. We saw quite a bit of great imagery too!

All in all it was a long weekend...lots of long hours, and early mornings spent exploring some of Oregon's lesser known gems. I think for a lot of people this was their first time in this area, and I know most of them are already planning their return trip!

Brian, Mike, and the rest of the Aperture Academy team!