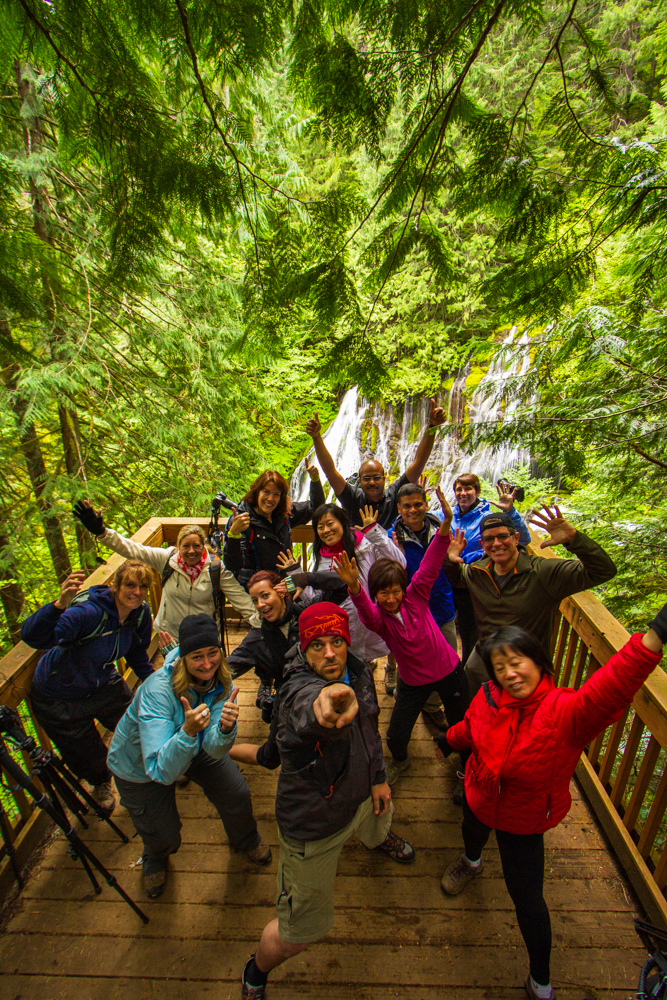 The Columbia River Gorge is an impressive river canyon over 80 miles long and 4000 feet deep, created from ancient volcanic eruptions and ice age floods. The floods transformed the many creeks feeding into the Columbia to make it one of the most concentrated areas with waterfalls, with over 90 named on the Oregon side alone. So this area has a lot of waterfalls, and our two day Gorge workshop is all about hiking to some of the most impressive ones this area has to offer. Its also worth it to note that conservation in the Gorge began as early as 1912, with the proposal of Oregon State Highway 30. A highway which was conceived to allow access to the many places along the Columbia river and to preserve them for generations to come. Many of the hiking trails we utilize on this workshop were originally constructed nearly 100 years ago.

Day One began like most other Aperture Academy workshops, early. But the Gorge is a little different, in that sunrise isnt all that spectacular when its overcast (welcome to Oregon). So with a forecast of cloudy skies for the entirety of the workshop, we decided it best to forego sunrise, in favor of just an "early" start. Actually, cloudy weather is absolutely perfect for the waterfalls which need to evenly lit to avoid hot spots which would show up through the canopy if it was sunny. We headed over to the classic Multnomah Falls first, to avoid the crowds that gather endlessly at the crown jewel of the Gorge. Multnomah is a very cool waterfall, falling gracefully 630 feet over 3 sections, with a little stone footbridge between the 2nd and 3rd falls. Here is where Ellie and I began to talk about framing and composition, as the falls can be challenging to fit into the viewfinder correctly. We helped the students get the optimum exposures to make the water slowly blur into a fine mist all while keeping an interesting composition.

Wahkeena Falls was next, since its close, and this one has a very long cascade, from which the students can shoot from many vantage points, in and around the water. One thing we try to impose on the students; the better shots are often with your feet wet! The many rapids along Wahkeena creek provided a wealth of shooting possibilities as well as the beautifully maintained grounds of the park, which had many wildflowers blooming and swept us away until it was time for our morning break. 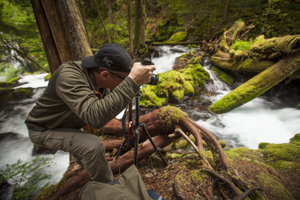 After break we decided to hit up 2 more falls starting with Bridal Veil falls. Bridal Veil is similar to Wahkeena, in that the falls arent as impressive as the creek itself, which is pretty awesome. Lots of vantage points for group to spread out and conquer. Bridal Veil has a wooden footbridge that compliments the creek rapids nicely, and the entire group ate it up, staying to get the perfect shots.

Latourell Falls was next, with an impressive 250 foot drop from a basalt amphitheater, this massive waterfall is great to explore, again using a wooden footbridge as a compositional element. This falls also has a few other vantage points, and one very close one has the falls surrounded beautifully by the flora in the area. Our group explored for a little while, until the weather caught up with us, and shooting upwards toward the falls proved impossible with the rain. So we packed it up and headed for home. 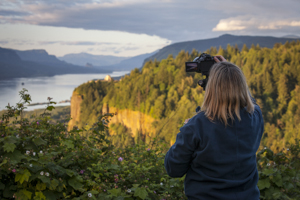 Day Two was started exactly like the first, with nice cloudy weather to greet us to our first destination. Emerald falls is a pretty small waterfall by the average height of those we visit throughout the Gorge, but that doesnt make it any less impressive. This beautiful 10 foot falls is nested comfortably within a massive temperate jungle. The trees close in around us and the greenery is spectacular. Once again the creek which its sits on, Gorton creek, is full of vantage points of the many cascades, lush greenery, and wildflowers!

From here we crossed over the Bridge of the Gods into Washington state, and took a little breakfast coffee break and a fine local establishment. We let everyone grab a latte, and an awesome crepe, and headed toward the next waterfall. 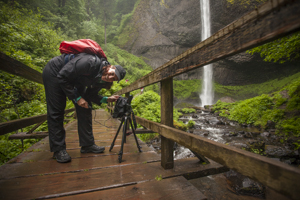 Panther Creek Falls is a massive 130ft waterfall, and is reminiscent of the 250 foot Burney Falls in Northern California. Its deafening, wide, and the water falling into the pools below creates so much mist, that everything is green with moss. Panther Creek is actually a traditional plunge waterfall and a cascading springs waterfall, which makes it pretty unique and amazing to shoot. The platform erected at the end of the short trail, provided our group with a great vantage point of the falls from above. The creek rapids to our right were pretty enticing as well, and Ellie and I were feeding students back and forth between the two viewpoints. We took our group shot on the platform above the falls, and left Washington for our next stop.

We had an amazing opportunity today to visit a local garden and waterfall at the Franciscan Sisters of the Eucharist, in Bridal Veil. Their property was hosting an annual garden walk, and we took advantage of the opportunity to come and photograph the grounds. The place was beautiful! Acres of gardens, two beautiful buildings, water fountains, creeks, bridges and a waterfall! Our group was giddy and spread out to photograph this amazing place. We worked on macro, architecture, landscape, you name it! Before long though, it was time to leave, as it was a long day without a break up until this point. So headed for home and a hot meal.

With the weather finally breaking (YAY!) we decided to travel up to the Womens Forum State Scenic Viewpoint, for a glimpse at sunset with Historic Crown Point in the distance. Wow, is all our group had to say, after a couple of days of overcast weather, the sun was great to see in the late evening, as it cast its beautiful warm glow onto Crown Point, and with the Gorge in the distance, this shot was well worth the long day of shooting. Another one in the books!

Ellie, Scott and the rest of the Aperture Academy team