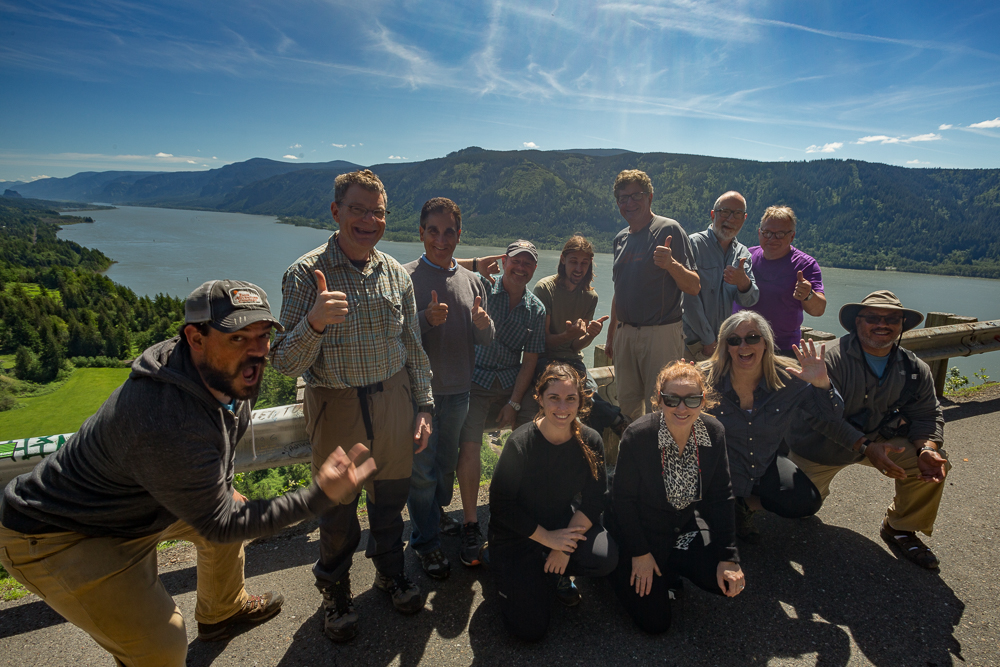 Flowers were blooming and a cloak of green had draped the country side. Ahhh….. Springtime in the Columbia River Gorge! The Gorge is one of the Aperture team’s favorite places to photograph. It’s a photographer’s playground consisting of lush vegetation, cascading creeks, bountiful waterfalls, and stunning vistas. Scott and I met up with a fantastic group of photographers for orientation on the night before the workshop began. The group got to know one another and learned about the itinerary for the next two days.

It was late spring, so we had to rise early in order to beat the sun. Luckily the hotel was kind enough to make sure that there was breakfast available for us before we headed out for our shoot at 5am. The first location on the list was the Cedar Creek Grist Mill. The mill was originally built in 1876 and is the only grain mill in Washington that has maintained it original structural integrity. The old building acts as a time capsule, taking the viewer to an era that was vastly different from the technological world that we live in today. The group shot in the area for about an hour and a half before we decided to pack up and head on.

The next stop was St. John’s Bridge in Portland. This bridge is truly a sight to see. It was finished in 1931 and at the time of completion it had the highest clearance in the nation (205 feet). The repeating gothic architecture offers unique photographic opportunities from below the bridge. The group shot through the towers focusing on a willow tree that was planted in-between one of the columns. Once we had our fill of the bridge we explored the area for a short period and then piled back into the “Ap Cab” and headed back to the hotel for a little midday shuteye and lunch. 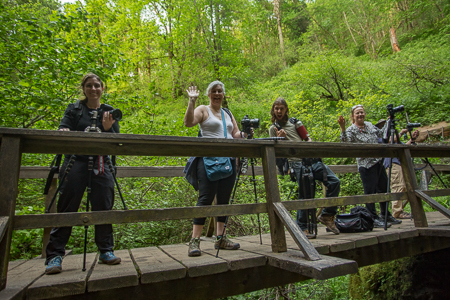 The well rested group reconvened in the afternoon for round two of the gorge. We motored our way to a location called starvation creek. Despite the name, the creek is a beautiful set of small cascades leading up to 186-foot-tall waterfall. The creek’s name is derived from an incident that began on December 16, 1884. A Northern Pacific train carrying 148 passengers found itself stuck between snow slides with no way to get out. It took twenty-one days to clear the tracks of snow. Some papers reported of starvation and smallpox but those reportes turned out to be false. Nonetheless, the creek where the incident had happened was dubbed Starveout Creek, later the name was changed to Starvation Creek.

After grabbing some photographs, we drove to the beautiful town of Hood River for a little bit of dinner before sunset. Scott and I took the group to The Trillium Café where we were pleasantly surprised with the food. The last stop of the day was beautiful vista overlooking the orchards of the Hood River Valley where we captured an excellent view of Mount Hood. After sunset we drove back to the hotel to rest up for the following morning.

We hit the road early to make our way to a waterfall that never fails to be a crowd pleaser, even though our group is usually the only one there. Panther Creek has so many intricate details that the group spent about two hours photographing the location. The falls emerge from an emerald oasis of moss and ferns and drop 130 feet below before churning along the creek bed. Once the group was satisfied with their shots, we headed to a fantastic gem of a coffee shop mixed with antique store for a little bit of a snack and a pick me up. 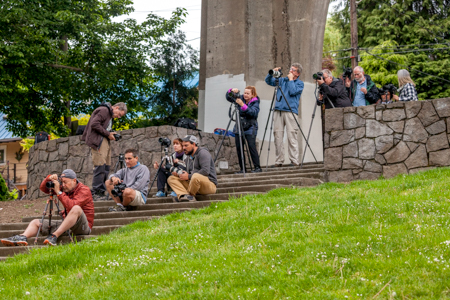 The sun was starting to catch up with us but we decided to show the group one more waterfall before heading back to the hotel. The next stop was Dugan Falls along the Washougal River. Although it has a rather short drop it’s still an impressive sight to see. There is a large pool at the base of the falls where bubbles rotate in a circle before being swept down river over another set of cascades. After the Dugan Falls stop we headed back to our headquarters in Troutdale for a short nap.

In the early afternoon the group gathered in the hotel lobby for a little bit of post processing instruction. Scott and I helped folks with their Lightroom and Photoshop workflows while reviewing any images they cared to share. Once post processing was finished it was time to head back out for our final shoot. The first location was Latourell Falls. First we hiked the group to upper Latourell falls. This water fall drops 120 feet and is about fifteen feet in width. The group had a good time playing with compositions after they caught their breath from the three quarter mile hike to get there.

After shooting Upper Latourell we hiked back down to shoot Lower Latourell Falls from two different locations. As it does, the day began to slip away and it was time to shoot sunset. For the grand finale Scott and I took the group to another epic vista point. This one was called The Portland Women’s Forum. The location overlooks Crown Point and the rest of the Columbia River Gorge. It’s stunning, to say the least. After the sun made its way past the horizon we took the group back to the Hotel to drop off their gear before heading to The Power Station restaurant at the historic Edgefield Hotel. We ordered food and drinks while sharing stories and good conversation.

Mike, Scott, and the rest of the Aperture Academy team!