The Columbia River Gorge is an amazing place. The all year long bright greens of the vast forested areas surround the Columbia river basin. Amazingly, about 14,000 years ago, a series of massive floods ripped down the Columbia river and carved out much of the gorge we see today. The many tributaries and creeks feeding into the river were irreversibly turned into waterfalls, as the flood waters scraped away the walls of the Columbia river.

Water is big here, and photographing the water is the name of the game in the gorge.

As we arrived in Troutdale, "The Gateway to the Gorge," we met up with our group of photographers. Phil Nicholas and I went through our customary round of introductions and got re-acquainted with our group of ten Aperture Academy alumni. I think that might be a first! Not a new student among us, and everyone knew the drill... wake early, bed late, repeat. The were ready for our push to accomplish the goal of getting everyone to the best spots in the best light possible!

Finally, with a favorable weather forecast of clouds (it's been two years since we've been that lucky), we decided to let our group sleep in a little bit; just until 6 am. With some nice cloud cover, we headed out Washington way to our first spot of the trip, The Cedar Creek Grist Mill.

For nearly 150 years, the mill has sat upon Cedar creek using a flume to draw the water into the mill to turn the grinding stone. It is one of the last relics of a bygone era, restored to its original glory. We spent over an hour at the mill, walking the students through the many vantage points of the mill, creek, and waterfall. Once everyone got their fill, we headed back into Oregon and made a stop in Portland at Cathedral Park. 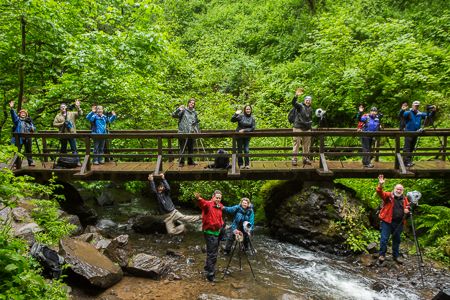 The St. Johns Bridge spans across the Willamette River, and over the top of the park. Underneath the bridge, the towers holding up the span look like Gothic arches. If one stands in the middle of the underside of the span, the arches make a repeating pattern down the length of the bridge, and right in the middle, perfectly placed, is a gorgeous green willow tree. The park also had some dogwood trees sporting a full bloom, and numerous other vantage points. We coaxed some interesting shots out of the area before retreating to the hotel for a midday break.

In the afternoon, the weather took a slight turn for the worse while we were heading into Bridal Veil Creek for a look at the falls. It was lightly raining as we made our way down to the falls (nothing our group couldn't handle), and the forest canopy provided some shelter. As the rain got a little worse, our group remained focused, and we used all the available geography to grab some pictures before we decided to retire to the van, to dry off.

We made our next stop at Latourell Falls, a sweet plunge waterfall with a basalt amphitheater and yellow lichen adorning its walls. From the bridge, we directed our troupe to the best vantage points around the falls. It was nice to see a few of the group enter the water and get some really nice shots from down low with the rapids. The rain had let up the entire time we were there, which was nice, as we had more time (and fun) working as many compositions as time would allow.

From there, we headed up to the Vista House for a look down the gorge from a higher vantage point. The rain clouds rolling overhead provided some nice texture in the sky as we switched gears and shot the Vista house in black and white. As there wasn't any break in the clouds, Phil and I called the evening short after everyone got some shots of the house and the gorge. We ended up heading back to the hotel early and having a great dinner with everyone at Tad's Chicken and Dumplings. 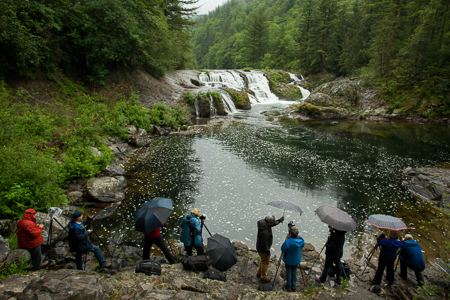 The weather forecast backed off slightly by morning, which was a welcome relief to the group, but with cloudy weather still abundant, it was a relief to Phil and myself. So we headed out once again into Washington for a look at two more waterfalls.

First off, we headed up the Washougal River to a local swimming hole/waterfall called, Dougan Falls. This is probably the most unique waterfall I've seen in the gorge, as it has a rather large swimming hole directly at the base of the falls, in which the churned up water creates thousands of bubbles that spin around a circle. With a long enough shutter speed, the bubbles turn into white streaks, which show the rotation of the surface water in the pool. So Phil and I guided everyone down the slippery "path" to the water's edge, and provided some folks with filters to slow down their shutter speeds even more, so that they could see the full effect of the bubble streaks.

After mastering Dougan Falls, we headed further into the forest and up in elevation until we came upon Panther Creek Falls, a huge curtain of cascades 100 feet long and nearly 100 feet tall that just pokes out of the forest canopy along Panther Creek. There's an observation deck there that gave us a bird's-eye view of the falls from a safe platform, where we set up tripods and grabbed some shots. But the falls is just half the story... up the creek, next to the falls, there's tons of photographic opportunities amongst the tree falls and rapids.

After a lunch break, Phil and I sat down with some of the group to go over some processing using Lightroom and Photoshop. In the afternoon hours, we headed out to our last waterfall, Starvation Creek Falls. It is a rather large waterfall on the far eastern side of the gorge that sports three distinctive sections from which to shoot: a lower cascade runs for about a hundred feet down a gentle slope; a lower pool that has a small six foot fall; and an upper pool that has a large 150 foot waterfall. It's pretty impressive, and we stayed there for a while, assisting so our group could get the most out of every angle possible.

Continuing our day's photo adventures, we headed to the less overcast (and downright sunny) Hood River. We drove into the valley and stopped at a pear orchard to grab a couple shots looking down the rows of green trees at a perfectly placed red barn, and even more perfectly placed Mt. Hood in the backround. From there, we headed further into the valley to a nice spot overlooking a vineyard with some beautiful pine trees, and again the awesomeness of Mt. Hood's snow-capped peaks in the background.

Well, that would've been the ideal scenario, but the clouds we had, although they provided a spat of color for a couple minutes, obscured the mountain (GAH)! Hey, at least it wasn't raining, right? Using some filters, we managed to eek out a little more color from the scene, and (persistence pays off) the group ended up with some pretty respectable "sunset" shots.

And, after two days of shooting in the gorge, our workshop was inevitably coming to an end. We had a little longer ride back to the hotel in Troutdale, and once we arrived, it was apparent that after two days of pushing, Phil and I had exhausted our group. They were eager to get to their rooms and sleep, and we all had a great time, and got some great photographs. Thanks everyone, for a great time back in the Columbia River Gorge!

Until our next adventure...

Scott, Phil, and the rest of the Aperture Academy crew!