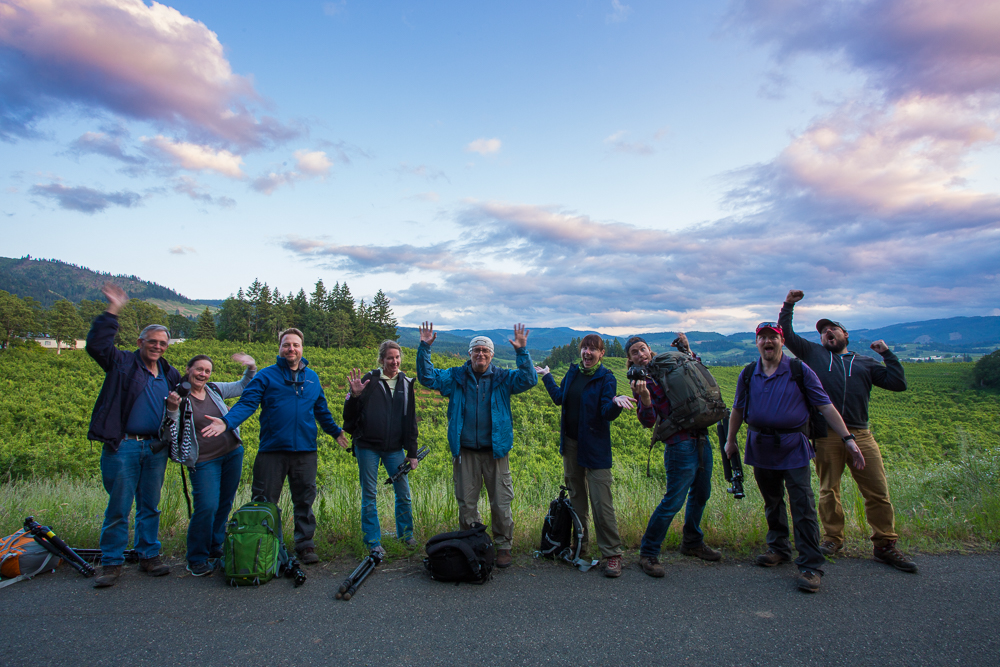 What is it about our fascination with water? The sight and sounds of water are soothing, beautiful, and mesmerizing. It's an energizing feeling, being around so much water and greenery, such as that in the Columbia River Gorge. It has more than enough places to escape and find zen-like harmony in nature, but also ample opportunities to capture the beauty of these places and preserve their magic in digital form.

The gorge is one of the most amazing places on earth for photography. Hundreds of waterfalls are hidden in the forested areas in just a sixty mile section of the mighty Columbia river, east of Portland. It is our job to take you there.

The Aperture Academy was expecting an eager group of photographers on our second workshop through the gorge in a week. Although smaller in numbers, the fresh group made up for it in spirit and determination. In Troutdale, Oregon we begin our story with Phil and I introducing ourselves to our guests.

This time around, we got a chance to see a couple new faces, as well some returning folks. Additionally, our forecasted weather for the next couple days was different as well, with things on the up and up. With our outlook good and everyone eager, we briefly parted company, for everyone to get a good night's sleep. 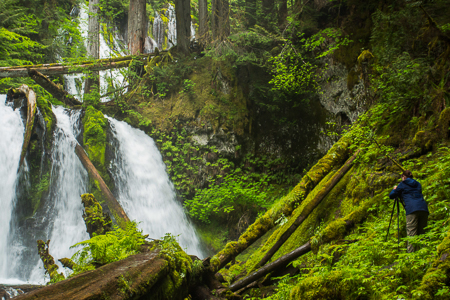 The first morning saw us make our way into Washington, to check out an old Grist Mill up a tributary of the Lewis river. The Cedar Creek Grist Mill is an old flour grinding mill from the 1870s. It's very well preserved and really blends in with the environment around the fast moving creek. It's warm-toned wood makes a great subject against the cool greenery, and dark tones of the water.

We spent well over an hour with our group working to find every possible angle to shoot from, as there are many. Once everyone got their fill, we headed into Portland for a surprise visit to a local park. Actually the "surprise" was that the weather had steadily improved enough to part the clouds and let some sunlight and blue sky shine though. That was nice as the backdrop for our shots, otherwise it would have been stark grey skies.

Cathedral Park is unique in that St. Johns bridge (which spans overhead) is adorned with Gothic arches that give the park its name. Looking down the row of towers underneath the bridge is reminiscent of being inside a Gothic church. We worked the compositions there, and found some dogwood trees in full bloom, as well as some park benches that helped to frame the bridge up nicely. It was about then that my stomach started to grumble.

After a lunchtime break, we headed out again to the east and into the gorge. We stopped and took advantage of the amazing weather to grab some shots of the gorge from the Vista House, which has some of the best overlooks facing west and east. We tried some panoramic shooting and were surprised by local wildlife, and a sightseeing bi-plane, before heading down into the forest to try our hand at a waterfall.

Bridal Veil falls is one of the prettiest areas to shoot down in the gorge. The waterfall itself isn't my favorite, but the area that surrounds it is amazing, especially the foot bridge that spans over Bridal Veil creek.

From there we went to Latourell falls, a 250 ft. plunge waterfall with a basalt amphitheater. This is one of my personal favorites. There's even a slightly smaller, nearly exact copy of the waterfall a mile up the trail.

Phil took a couple of our group quickly up the trail to see the upper version of the falls, while I took the larger contingent down to the lower falls. As we always say, sometimes the best shots are worth getting wet for, and to my surprise, a large number of our remaining group believed us, and helped themselves to a dose of cold mountain runoff. With sunset approaching, we headed back up the hill to the Vista House to take in all the colors. Good thing too, as the light show really only happened back towards the sun. The colors were amazing, and even though we were forced to shoot into the sun, all was well.

With clouds in the forecast for much of the morning, we were free again to wake at a more reasonable hour. Once we got started, our journey took us into Washington again for a look at a truly unique waterfall, vastly different from any other in the gorge -- Dougan Falls, a small-ish waterfall not far from the Washington border. What it lacks in awe for waterfall's sake, it more than makes up for in its originality.

You see, Dougan falls is a local hotspot for swimming on hotter days. There is a rather large pool at the base of the falls, with a rather large amount of churned up bubbles, or foam. This pool spins around very slowly, but if you can slowly shoot it, the bubbles turn into cool streaks. 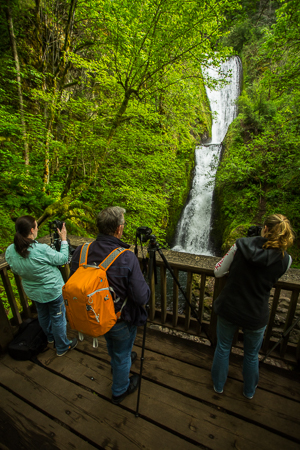 So, Phil and I navigated our group to the water's edge and provided instruction on filters, namely the solid neutral density kind, and proceeded to slow down everyone's exposure long enough to make the bubble foam-like stuff streak around in a circle in front of the falls. After everyone was thoroughly impressed, we paced up and headed deeper into the Washington wilderness in search of bigger falls, and maybe a sasquatch or two.

We arrived a little later in the day at Panther Creek falls. With no squatch in sight, we headed down to the viewing platform and began instructing on how best to capture the falls from our elevated position. While a small group was able to use the platform, the rest of the group was helped by us to shoot some scenes along the creek leading up to the falls. The rapids provided some great opportunities. That was when I wondered, who else was hungry?

With lunch out of the way, Phil and I met the group in the hotel for a couple hours of post processing instruction. After that, we headed out for our last push of the workshop.

First stop, Starvation Creek falls, a pretty large waterfall with an inordinate amount of vantage points. We took our group up to the base of the falls and spent some time in the upper and lower pools trying to grab every angle we could before moving on. As we headed out, we said goodbye to the waterfall part of the gorge and made our way into Hood River. We were greeted with clear skies and sunlight! A welcome change from the gloomy grey.

We headed down in to the valley and stopped in a pear orchard to take in the view through the trees at an old red barn with Mt. Hood in the background. Or, at least, the mountain was supposed to be there (we think someone stole it before we got there). Anyhoo, the weather was nice and the light was dramatic enough to pull off some great shots.

When it was time for sunset, we had the perfect vantage point. Overlooking part of the valley, we stopped at Vantage Point, with a view of a vineyard, orchards, and of course, Mt. Hood. The skies began to encroach ever further in our direction and the nice clear sky we had started with began to close up. Some flickers of pink and purple appeared before the sun dropped below the clouds, and that was all she wrote. As we drove back toward the hotel, it was evident that everywhere else had it bad off, because we were hit hard with rain. But, we did manage to grab a pretty spectacular sunset from the night before, so it all worked out great.

We would like to thank our fabulous group for their generosity, and their faith in putting their trust in us to deliver them to some really cool spots. I know I had fun! I think I can speak for Phil, too.

Until our next adventure...

Scott, Phil, and the rest of the Aperture Academy team!