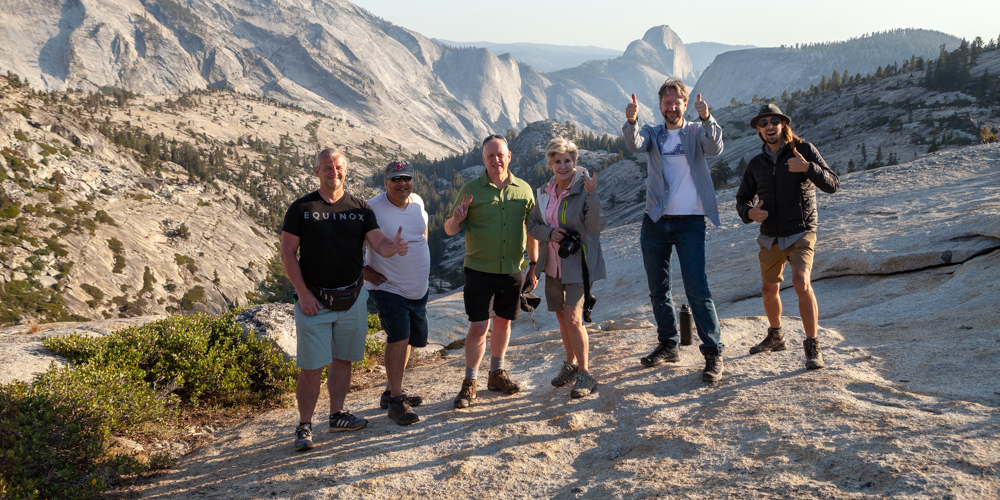 There are few places in the US with as many iconic vistas as Yosemite National Park. Because of this reason, Yosemite is the perfect location for panoramic photography. To kick off our Yosemite Panoramic workshop we conducted a brief orientation in the lobby of The Yosemite View Lodge. Once everyone had the chance to get to know one another we dove into a panorama powerpoint presentation. During this time the group was able to ask any question that arose in relation to panorama photography. After the presentation, we set up a few workstations were folks could dial in the nodal points on their lenses. Once everyone had their nodal points set, it was time to head into the park to get some real world experience.

The first stop on the list was Tunnel View. This spot is perhaps the most recognizable location on the west coast. First we tried out a single row panorama, and then we upped our game by tossing on longer lenses and trying two and three row panoramas. After about an hour of shooting we headed up the road to Glacier Point. Glacier Point offers incredible 180 degree views of Yosemite Valley and the surrounding high country. First we shot a few panoramas of eastern portion of the park, then we headed to Glacier Point proper to shoot a few single and multi row panos. We continued to shoot until the sun had sank in the western sky. After sunset, we headed back down to El Portal for dinner and some well deserved rest. 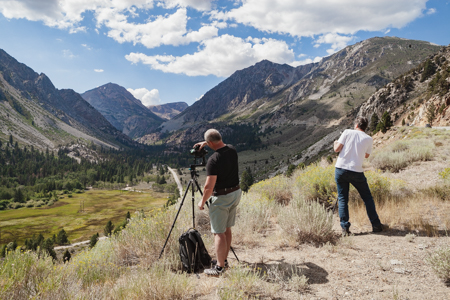 The following morning we departed the hotel at 8am. We headed up to Yosemite Valley where we fired off a few panoramas from El Capitan Meadow. The meadow is one of the most peaceful locations in the entire valley and the view isn’t too bad either. From there we headed up the Tioga Pass road until reached Tuolumne Meadows. There we shot some pristine high country ponds. After the ponds we headed back down the road a short way until we reached Puppy Dome. Puppy Dome offers spectacular panoramic views of Tuolumne Meadows and Cathedral Peak. We racked off a few different panos before making our way down the Pass for some delicious lunch at the Whoa Nelly Deli.

After lunch we headed back towards the park where some afternoon clouds were starting to form, so we made an impromptu stop as we began our climb back into Yosemite. The dappled light made for some dramatic captures. Continuing on, we stopped at Tioga Lake just outside of the eastern gate of Yosemite. By this point the group had shot most of the day but there was no sign of anyone slowing down so we made a quick stop to shoot Lambert Dome from Tuolumne meadows followed by an overlook of Tenaya lake. The last shoot of the day was a grand vista of Halfdome from Olmsted Point. Once the sun had set, we made our way back to El Portal to get some good rest so we could tackle post processing the following morning. 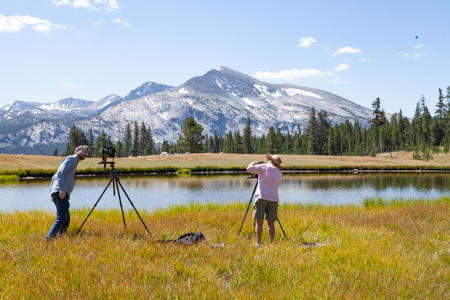 At 8am the group met up in the Aperture Academy suite to put their processors to the giga-pixle test. The group learned some important pre stitching techniques and then we practiced stitching panos in Photoshop and then in Lightroom. Before we knew it, the post processing session was nearing an end, and I answered any last minute questions that had come up.