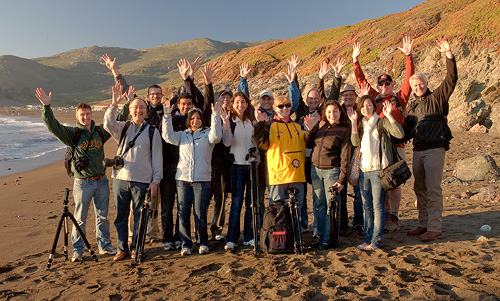 When people think of winter in the city...most would probably think about the blanket of snow and ice that is pelting the majority of the United States during the early part of 2011. They probably don't think of a warm sunny day and beaches full of naked dudes....but that is exactly what greeted a full workshop full of participants and instructors Brian Rueb and Scott Davis on this hot sunny day in San Francisco for our Marin Headlands photography workshop.

The group assembled in the parking area and after a brief orientation with the instructors to go over what they should expect (including the naked people) they headed out onto the beach for the first shoot of the day....The Golden Gate Bridge. The beach also serves as one of the only nude beaches in the area...and those who use the beach for this purpose are not shy around the 90% of the populous that doesn't. It's an interesting little bit that makes this day so entertaining. Photography wise, this time of day makes is less than ideal for creating great images but is still great for learning. We use this time to really get to know our students, their gear, and their goals for the day. Many students are beginners and we can utilize this location to begin to unravel some of the mystery associated with aperture, shutter speed, ISO, etc. For the more advanced students this is a place to get more into the philosophy side of things...and work on composition, and discussing what you do when photographing a location in rough times of day, when the light is harsh. There is always something to learn, and we had a great group of students eager to soak up knowledge. 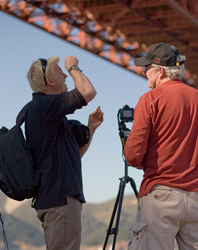 he next location of the day is one of those areas that a photographer could easily get lost in, creating images that show larger scale as well as more intimate details of the location. Fort Point is a civil war era fort located underneath the Golden Gate Bridge. The fort has a rich history of being at the ready to defend the US from outside attack. Those days are hopefully long past, and now the fort has a rich history of providing the Aperture Academy with an awesome location to teach people about photography.

We start break the group up once we've entered the fort. Scott takes half, and Brian takes the other half. We do this to allow our instructors a chance to work closer with individuals as well as put less of a crowd in some of the forts more intimate areas. The instructors show their groups some of their favorite locations in the fort and go over the basics of the exposures necessary to capture them as well as pointing out some tips on compositions. These areas include the powder room, which is small labyrinth of shelves full of old gun powder barrels where students can really work on some nice macro shots as well as capturing some nice repetitive shape shots that are also quite nice, and use some very key components of composition. One student even took out the extension tubes to really give the barrels some different looks. 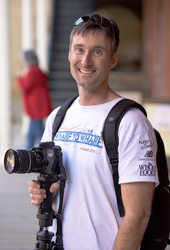 The other stops we use for our instructor time in the fort are series of archways. One inside that includes a seemingly endless line of doorways. This spot is a great place for not only composition, but white balance instruction. Instructors can teach the effect of white balance as a tool to get correct color in the image, and also a s a creative tool to help give images a different mood or feel. For many students this is an ‘A-ha' moment where white balance begins to lose some of its mystery and becomes a more real and manageable tool to be utilized in the field. The second series of arches is a series of brick archways that really demonstrate the ancient architecture of the location. It's great for composition lessons as well as a spot for demonstrating one of the many uses for a graduated neutral density filter. Often the light filtering in from the outside creates a harsher light on the left side of the arches...and this can be easily managed and controlled with the use of a filter. Most photographers assume that a filter like this is only for landscape photography. While that is somewhat true, they are primarily used for landscape photography...there are many ways to get creative with these filters and help balance out other tricky exposures. 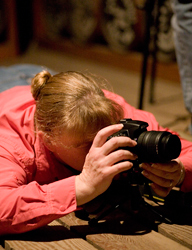 Once the instructors have spent the first hour showing the class some of their favorite locations in the fort it's time for the students to explore on their own. The fort is full of really narrow hallways, interesting rooms, and other interesting nooks and crannies...it's fun for the students to begin to put to use some of the lessons they've learned thus far in their day, and all while exploring one of the treasures of the city. The instructors, of course, are walking around too in case someone needs a little help creating their vision.

The next stop is lunch/dinner. We have a full day and taking a break allows students to get back a little of the energy they've used in the first half of the class as well as get to know their fellow classmates a bit better. While the break is a temporary pause in the actual photography the conversations all tend to center around photography and the chances to learn continue.

The last part of the evening is spent in the area the workshop was named for- The Marin Headlands. This little slice of wilderness paradise seems a far escape from the city that sits so close by. We take the class out on to Rodeo Beach...where a series of spectacular rock sea stacks sit just yards of shore and give the students a great subject to photograph. This location also has considerable rocks on the beach which gives the students ways to help use a strong foreground element to create dynamic and interesting compositions. The moving waves, the long exposures, and the use of our filters make this round of images some of the best during the day. Many students came to this class with the specific goal learning how to capture those dreamy seascape images and learn how to use filters better to help them achieve those images. 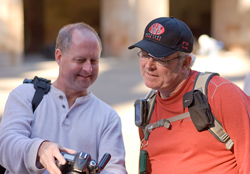 The class had a great time, and was enthusiastic about the process of creating seascapes shots, which often includes constant wiping of sea spray, and the occasional pants soaking by a large wave. Several students and at least one of the instructors took a decent soaking by Mother Nature. The sunset turned out to be beautiful as well....the harshness of the days light faded nicely into a pale yellow, and some small clouds even showed up to give the sky a bit more interest. When sunset faded, the class packed up and headed back to the New ApCad van which was making the first run as the newest member of the team.

Even though it was getting late, we made one more stop at the scenic overlook atop the Marin Headlands looking back at the city and the mighty Golden Gate Bridge. This last stop is one of the highlights for many. They've seen the images from this location, but have struggled to get some of their own either with finding the time to get there, or the technical aspects of creating that image. This stop gives them that chance, and serves as a brief introduction to the world of night photography that we teach on our Night Owls class. The students spread out and then proceeded to knock out a series of great images of this bay area icon. Scott and Brian perused the area and helped answer any questions that arose. It goes without saying that many of the students could've easily spent another hour here capturing the bridge in different angles...but it was getting cold and windy, time to pack it up and head back to the cars with a full day of photography and fun in our rear view mirrors.

Until next time, Brian, Scott, and the rest of the Aperture Academy Team!

Brian, Scott and the rest of the Aperture Academy Team!