On this particular Saturday, a group of 12 eager photographers joined Mike Wardynski and I for a full day of photography in the Marin Headlands and some of the more secluded areas around the Golden Gate Bridge.

After working our way around Battery Godfrey, we all jumped back into ApVan and headed to Sausalito for an early dinner. As we drove over the Golden Gate Bridge, some people inquired as to where the name “Karl the Fog” came from. While the true origin is unknown, it is believed that “Karl” is a reference to the frightening giant in the 2003 Tim Burton flick “Big Fish”. In the movie, Karl was not really frighentening, just lonely. San Francisco’s giant “Karl” is the fog. Some people love how he keeps the city cool, while others hate that he prevents traditional California summers. As photographers, we love the uniqueness of how Karl embraces our city. 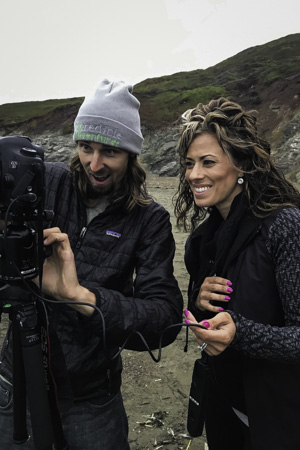 After our meal break, we headed through the Marin Headlands. The main goal; Rodeo Beach. The tide was out, which meant we were able to head all the way out to the sea stacks. Normally, we would be working with graduated filters, polarizers, and trying to get those long silky exposures of the water; but with the heavier fog today, most students were able to shoot with smaller apertures to give a longer shutter speed and create long lines of water movement in their photos.

Even though we had already photographed the Golden Gate Bridge, there is nothing quite like seeing “Goldie” shine in the night. So we left Rodeo Beach and headed to the Fort Baker pier to for a view of the Golden Gate Bridge under the fog and a little taste of night shooting. This gave the group a chance to work with longer exposures required of night photography.

As the group grabbed their gear bags and tripods from ApVan, we continued discussing long exposure photography, reminding everyone to make sure their tripods where on stable ground to prevent movement and blurring of their photos. As sounds of shutters clicked, they were almost immediately followed with voices of “ohh, that’s beautiful.”

While late summer San Francisco is not always blues skies and sunsets, what we do find is sometimes more unique and amazing.

Aron, Mike, and the rest of the Aperture Academy Team