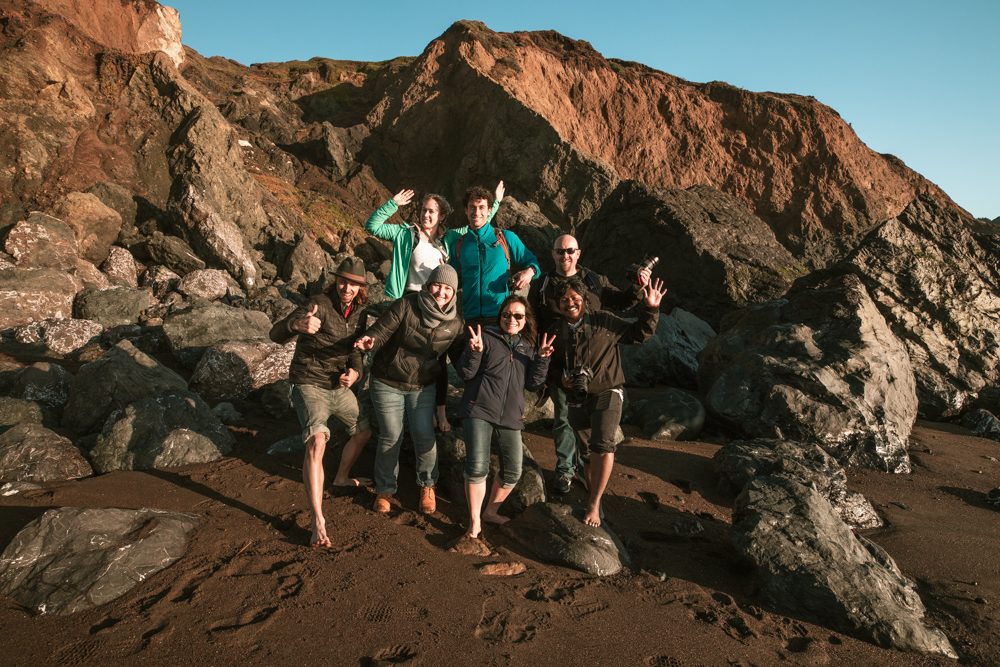 At our appointed start time on a chilly but beautiful afternoon, we all gathered at the starting point in Marin County. This workshop was a mix of new students and alumni. It is always nice to meet new people and nice to have former students return for more good fun and good times.

Once everyone arrived, we discussed the itinerary for the day, including all of the fun locations that we had in store. After a quick round of introductions to get to know each other and learn about our goals for the workshop, we were off. We loaded up in the comfortable ‘ApCab' and we headed south to San Francisco to get the workshop underway.

The first stop of the afternoon was Battery Godfrey, on the south side of the Golden Gate Bridge. Mike led a brief photography lecture covering the "Exposure Triangle", discussing the three key factors to make quality images (ISO, Shutter speed and Aperture). With a good understanding of these concepts, is was time to shoot. We were able to create a variety of images using the bridge by itself and even replicate a classic image of the bridge framed by a couple large cypress trees. Given that it was midday, this location was a perfect spot to talk about neutral density (ND) filters, polarizers and their benefits, as they can dramatically alter your images.

We then moved only a short distance away where we had another great bridge viewpoint from which to utilize these techniques. Despite some significant wind and chilly temps, everyone was clearly having fun. Before wrapping up here, we talked about being creative and looking for things not everyone else would see. As an example, there was a small muddy puddle behind us and was otherwise unremarkable. However, by getting the camera low, just inches from the ground, we were able to show students a whole new perspective. The reflections in the puddle showed a great mirror image of the clouds, fence line, cypress trees and even the tip of the bridge tower. Everyone immediately gave it a try and were beaming with smiles as they created unique images that most people wouldn't even notice. 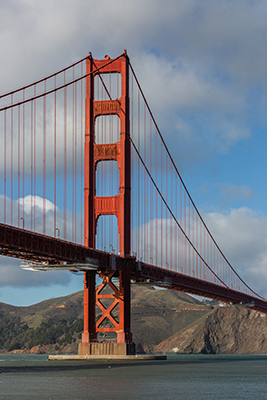 After getting blown around for a bit by the ocean wind, we headed back to the warm van, even stealing a few last shots on the way. We headed down to Fort Point, another iconic San Francisco shooting location. In the shadows of the hills behind us, we were treated to an awesome view of the historic fort and the iconic Golden Gate Bridge. The roadway leading to the fort is lined with very large gauge anchor chains. From the constant barrage of salty air and crashing waves, the textures and colors of the decaying chain are amazing and make an outstanding foreground for a bridge photo.

After shooting the bridge, the chains, waves and even the famed Alcatraz Federal Penitentiary, we moved on. We headed across the bridge to Sausalito for a meal and restroom break. We also knew that after being outside in the cold and wind, the great Italian food at Taste of Rome would be a good way to warm bodies (and bellies).

After this respite, our adventure continued. We drive to Fort Cronkite and Rodeo Beach in the Marin Headlands. Walking along the beach to some large sea stacks, we hoped to capture the motion of the waves and a beautiful sunset. Big crashing waves yielded some outstanding opportunities for great foreground elements as the sun sank into the horizon. We were able to discuss and practice using long and fast exposures to achieve interesting effects. This included catching motion blur with long exposures and freezing the crashing waves with very fast shutters. High surf provided lots of water for us to incorporate into the images. Our group of barefoot photographers put themselves right where they needed to be to obtain some outstanding images by being willing to get their feet wet and sandy. Our group of partially wet photographers were all smiles and laughs.

After the sun had set and the skies were beginning to darken, we trekked back across the soft sand, headed up into the hills, ending up at an overlook point for us to see the Golden Gate Bridge in all its glory! As blue hour was ending, we shot images up to 30 seconds long. The reactions by the students to seeing the bridge images they were capturing was priceless.

After spending some time here, it was once again time to load up. Everyone got into the van for the final drive of the night, heading back to our starting point. With everyone returning safely to their cars, we bid our farewells. Mike and I were excited that the students ended their day with new photography techniques under their belt, and many images on their cameras that they will absolutely be proud of.

Kevin, Mike, and the rest of the Aperture Academy Team