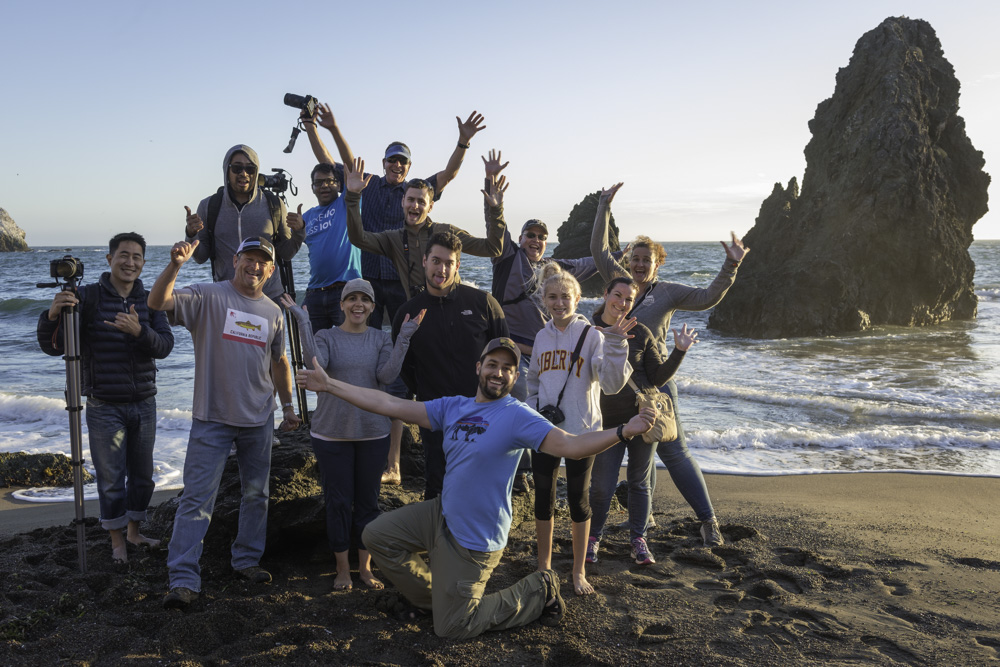 When most people think of San Francisco, they think of the classic Golden Gate Bridge. However, there is much more to this city and the surrounding area as you begin to explore it. Some of the most amazing areas to visit are right under our noses.

On this particular Saturday, a group of 11 eager photographers joined DeAnna Roberts and I for a full day of photography in the Marin Headlands and some of the more secluded areas around the Golden Gate Bridge.

We began class with an orientation, got a gauge of everyone's skill levels with a camera, and let them know the schedule for the day. Today, our group was great and came with a variety of skill levels, which always makes the day fun.

Our first stop was Battery Godfrey with one of the most unique and classical views of the Golden Gate Bridge, commonly known as the alignment… where the two bridge towers perfectly align with each other while framed by a pair of 50ft plus tall cypress trees. Here we really started to touch on the basics of photography (aperture, shutter speeds, ISO, composition, white balance), allowing the students to experiment as a group or seek out individual compositions. 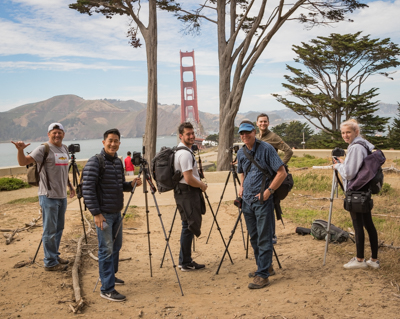 After working our way around Battery Godfrey and shooting "Goldie" from the cliff bluffs above Marshall's Beach, we all jumped back into ApVan and headed to Sausalito for an early dinner. As we drove over the Golden Gate Bridge, some folks asked questions and some shared images from the LCD screens of their cameras.

After our meal break, we headed through the Marin Headlands to Rodeo Beach. While the tide had just peaked, there were still crashing waves against the rocks for everyone to experience what seascape photography is all about. While walking across the beach, we continued to discuss how to use circular polarizers and natural density graduated filters to get those long silky exposures of the water.

Once at the sea stacks, some students played it safe and shot from further back while others rolled their pants up, threw their shoes to the side, and went running towards the breaking waves to get those seascapes photos that can only be achieved by getting your feet wet. 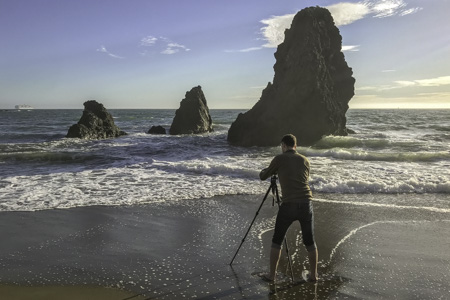 Even though we had already photographed the Golden Gate Bridge, there is nothing quite like seeing "Goldie" shine in the night. So we left Rodeo Beach and headed up to the Marin Headlands for a view of the Golden Gate Bridge and San Francisco with a little taste of night shooting as the sun set on our day of photography fun. This gave the group a chance to work with longer exposures required for night photography.

As the group grabbed their gear bags and tripods from ApVan, we continued discussing long exposure photography, reminding everyone to make sure their tripods where on stable ground to prevent movement and blurring of their photos. As sounds of shutters clicked, they were almost immediately followed with voices of "ohh, that's beautiful."

While summer San Francisco sometimes has fog and sometimes its blues skies and soft color sunsets, we always find something beautiful worth photographing.

Aron, DeAnna, and the rest of the Aperture Academy Team