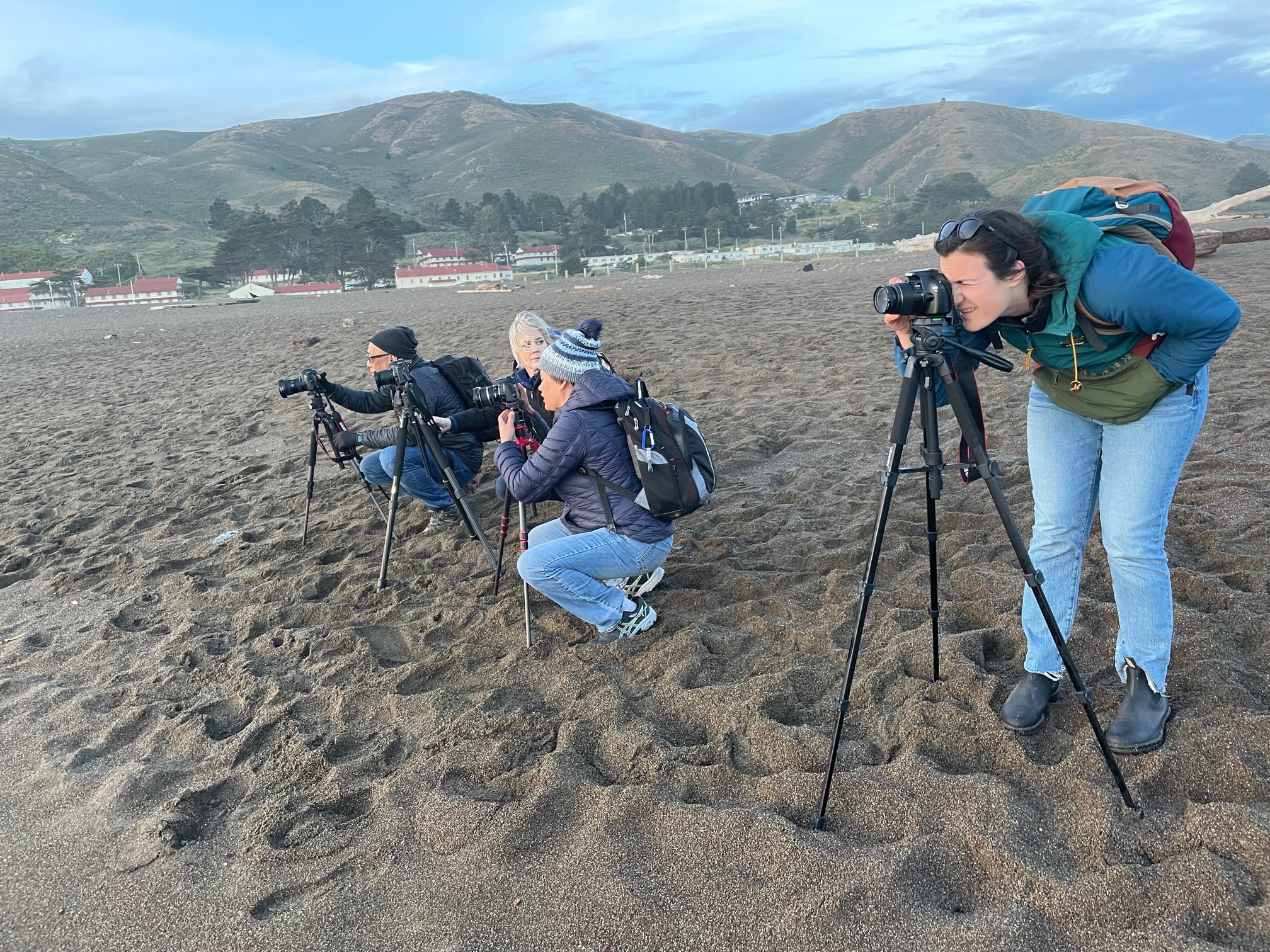 Heading to our meeting location for today’s workshop, there were beautiful blue skies with wispy clouds and a decent fog bank rolling in. With weather like that, it was a great sign that we were going to be in for a great workshop.

At Battery Godfrey, we met our group of eager photographers. We did a brief introduction of who we all were and what we were hoping to get from the class. As we were already at our first stop, it was time to shoot! This historic military site offers several incredible vantage points of the Golden Gate Bridge including some well-known perspectives of the bridge framed through Cypress trees. The sweeping views of the Pacific Ocean, shipping and boating traffic, planes, birds, and the Marin Headlands are all great photography subjects from this area. The rolling fog was great as the bridge towers appeared and disappeared repeatedly.

After everyone had gotten lots of great images, we were ready to move to our second stop. Only a couple minutes away we headed over to Fort Point. With the rusting anchor chains lining the road and the majestic bridge built overtop the historic fort, there are seemingly endless possibilities for photographic compositions. The weather also continued to be on our side with heavy fog coming and going. The rusting anchor chains have great texture and color. While they can be subjects themselves, they also make for great foreground elements. As the swells were decent size, we were also treated to some impressive surfing just offshore. We watched some large ships and a lot of sailboats coming into and out of the bay. With dozens upon dozens of images taken here, we regrouped and talked about our next stop and headed for our cars.

We drove north across the Golden Gate and went to Fort Baker. The Sausalito side of the Golden Gate bridge offers great views of the San Francisco skyline and the Golden Gate Bridge. The fog continued to work in our favor with heavy fog followed by a brief period of little fog. This created hanging lighting conditions of the bridge. This allowed for great images plus allowed us to talk about capturing images with a slightly longer exposure. We were able to shoot great angles from a couple different vantage points.

We then caravanned to our next stop for this afternoon’s adventure. Following winding roads and a through long one-way tunnel once used for military purposes, we drove to the top of the Marin headlands. The sweeping views from this famous viewpoint allowed us to see the entire San Francisco skyline. The Golden Gate bridge, the ocean, Alcatraz, the Bay, and even Mount Diablo. Walking through a short tunnel, we were treated to more great sites as the sun was falling through the clouds above the Point Bonita Lighthouse and Rodeo Beach. From here, we could see our next stop from which we would shoot sunset.

We drove through the scenic Marin Headlands to arrive at Rodeo Beach. The goal was to shoot the large sea stacks at sunset, but Mother Nature had other plans. The tide was very high as was the surf so we couldn’t safely reach our desired location. Large swells crashing on shore made sure we stayed on our toes to stay safe (and dry). With light clouds, it looked like we were in the store for a great sunset, nonetheless. In advance of sunset, we continued to talk about and practice with exposure settings, compositions, including capturing motion blur. The sunset was not the amazing one we had hoped for, but it was still hard to be disappointed with strong waves, great clouds and a little bit of color in the sky. We also found other great composition pieces to use in our images, including large rocks in the sand and freezing spraying water with faster shutter speeds.

Despite the workshop being almost over at this point, everyone was invited to stick around for one more stop. With everybody in agreement, we headed back up the hill to find a composition of the Golden Gate bridge again but this time because it was getting darker, we could incorporate and practice some nightline long exposure images. These techniques allowed us to capture light trails on the bridge as well as light trails of passing boats.

We were treated to some great blue skies and a great view at out final stop. Once we got back to our cars, it was a quick round of goodbyes following a long day of shooting. I feel confident that everyone got frame worthy images, which is always the goal.

Looking forward to seeing everyone again in future workshops.