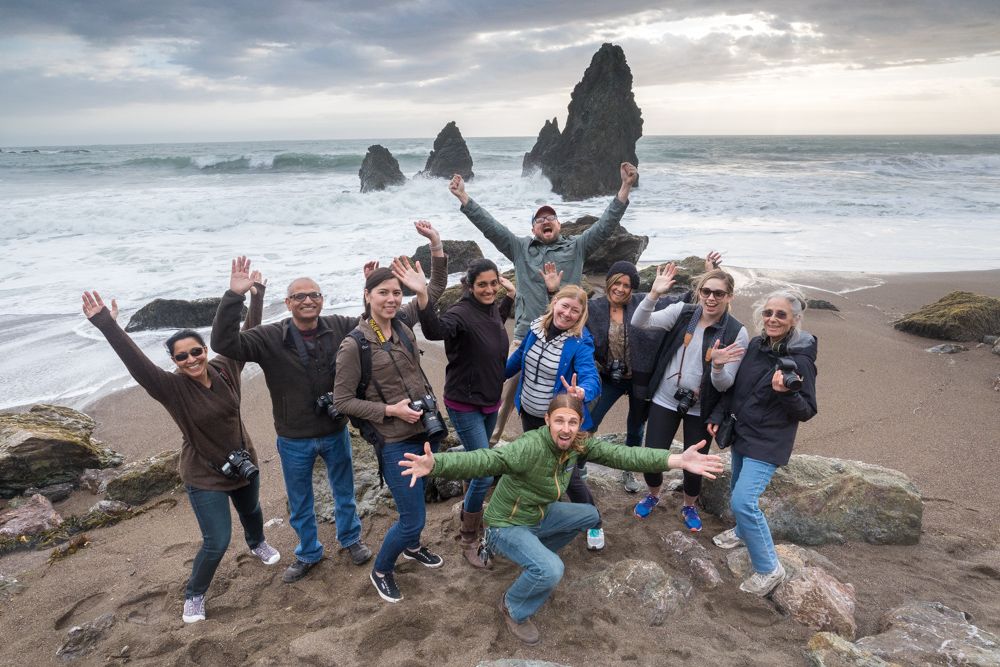 San Francisco is not unlike other big cities...it has it's problems; traffic, crime, inflated prices, and the like...BUT when the weather is lovely in San Francisco, it's still one of the most beautiful cities in the world. Mike and I met a group of 8 photographers who were ready for a full day of exploration in and around Golden Gate National Recreation Area, and the Marin Headlands. Our day began at Battery Godfrey. This vantage point is where folks can have a nice shot looking right up the Golden Gate Bridge, through the towers. For us it's a great place to begin to demystify some of the complexity of the cameras people are using...We encourage everyone to shoot in the scary, manual mode. A lot of newer photographers are intimidated by this setting, and wish they understood it better. That's where we come in! Mike and I helped the group power through Aperture, Shutter Speed, and ISO. We talked about the famous histogram house party...danced with the white balance, and also covered composition. It was a crash course in this settings of a camera in Manual mode...but the best way to solidify these settings is by putting them to practice. We wandered around this area for about an hour, working on changing our vantage points, utilizing some of the yellow flowers that were blooming in the area as a foreground, and framing up the GGB with some of the great windswept trees we found in the region. It was a full stop for sure! 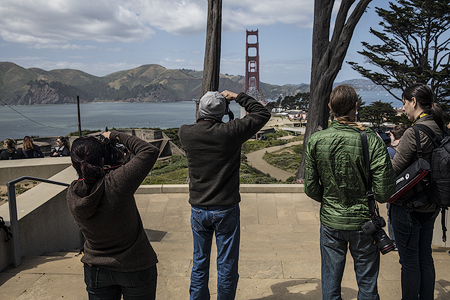 Before taking a lunch break in Sausalito we cruised up to Hawk Hill, one of the highest vantage points of the Golden Gate you can find. From here we again worked on composition, continued our talk about settings, and pushed right into polarizing filters. Mike got stuck in some traffic after dropping us off, so we all had a few minutes extra to sit and wait...and just soak in the wonderful weather and view. There was an inversion layer in effect, which meant that a layer of hot air was pushing in from above. This meant we were nice and pleasant while we waited. If fog was in the area that inversion layer would push it down so it covered all of the bridge but the tips...luckily for us there wasn't any fog, so we were able to see the bridge, and the city in all their majesty. The lack of fog also meant there would be a much greater chance of having a sunset to remember once we set up at Rodeo Beach.

Rodeo Beach is wonderful. It's like a little rocky slice of the the Oregon or Washington Coast nestled just a few minutes drive from San Francisco. Our group walked out on the beach, bellies full of wonderful food from a Taste of Rome in Sausalito. The tide was on the way in, so we were going to really have a shot of getting some wonderful wave action at our shooting location. Once we arrived Mike and I had the group set up a little farther back from the foreground rocks so we would be less at risk of getting pummeled by the rocking' waves that were crashing in. I've been to this beach close to a hundred times in my life and a nice sunset is pretty rare here...and lucky for us we were treated to a nice one on this night. We helped the group dial in their apertures and shutter speeds, and then showed them how to use graduated neutral density filters to balance out the exposures. Sunset was really pretty, and it made it hard to leave...but we needed to because the tide was coming in pretty heavy now, and we still had to get to one more spot to shoot! 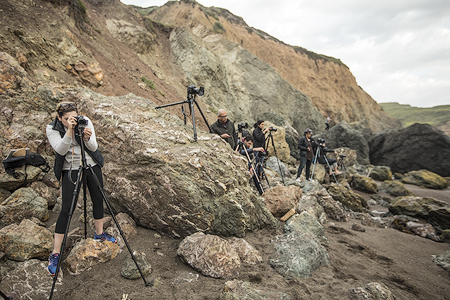 Everyone made it through the gauntlet of waves with no loss of gear, and only a wet shoe or two...MISSION ACCOMPLISHED! It's no fun without a little degree of difficulty, right? Our last stop for the night was a little intro to night photography. We took the group to Fort Baker where we could set up and get some really nice images of the Golden Gate Bridge. We arrived with enough time to catch the last part of the blue hour too, which mean the bridge glowing orange, mixed with those wonderful complementary blue colors and created a perfectly balanced color scheme. You can't come to SF on a photography trip and NOT get some night shots of the GGB! Everyone got some terrific shots, as well as a little taste of night shooting...once again, we did not end on time and once again, we did not care. We're not going to sacrifice prime shooting and happy groups for the hands of a watch!

All good things do have to end though, and while we loved hanging out with our group...it was time to get them back so they could head home and start the fun of looking through all of the images they got that day.