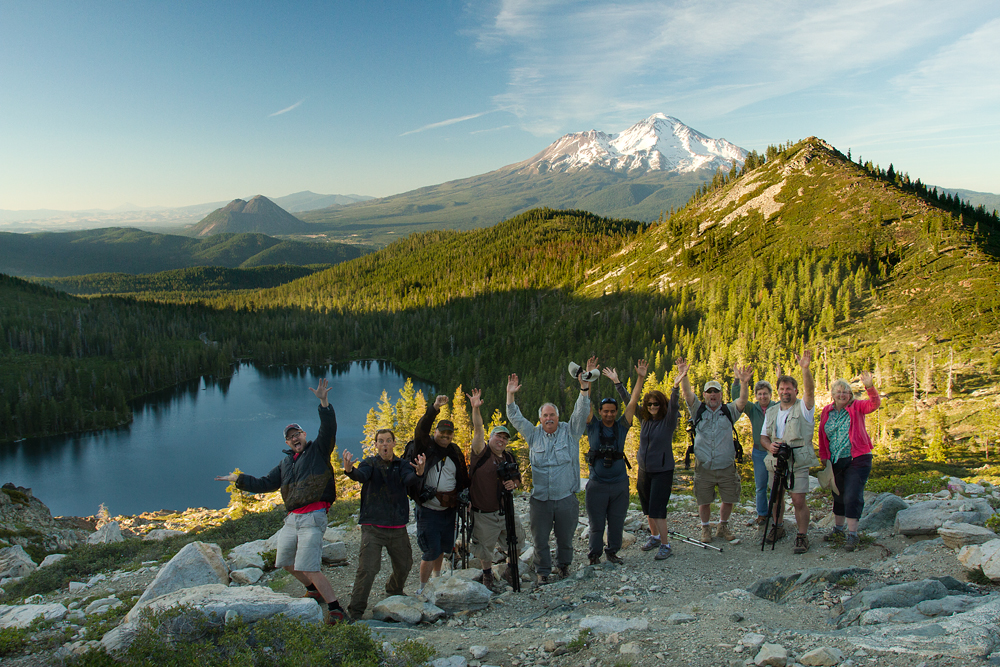 Mount Shasta is a Northern California icon, standing out like a snow-covered castle. You can see it for miles in any direction. In addition to the mountain, the area boasts a variety of waterfalls and stunning vistas that make this region a popular hub for outdoor enthusiasts from all over the world.

A group of photographers met professional instructors and photographers Brian Rueb and Scott Donschikowski for a weekend of photography "boot camp" at inspiring Mt. Shasta. Class began with orientation, where Scott and Brian went over the 2-day schedule, as well as got to know what the students wanted to work on over the course of the weekend, and what kind of gear they had brought with them.

Sunrise comes early this time of year, so the class met in the lobby of the hotel at 3:45 am and then loaded into the Aperture Academy van, also known as the ApCab, and set off for the first great location of the day... Trout Lake, a little known gem of the area, provides not only a stunning view of Mt. Shasta, but also a great opportunity to get a reflection of the mountain in the glassy waters.

Once on scene, the class spread out to find their compositions. Brian and Scott worked with the students on the use of polarizing filters and graduated neutral density filters to help create a more aesthetic and better-exposed scene. 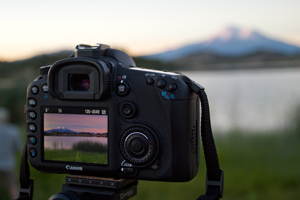 The sunrise didn't disappoint, and the sky lit up with a variety of gold and orange that filtered through the linear clouds in the sky. We couldn't have asked for a better sunrise, and the entire class came away with some stunning shots! Once the sun was up, it was time to head out to other locations, and see what the day brought us.

The next stop included a small one-room church that has been an icon of the area for almost a century. This small white church really creates a nice contrast in more than one way with the mountain behind it. The clouds in the sky were great, and the class really enjoyed their time shooting this location. With a scene like this, it often lends itself better to black and white than color, so the class switched their cameras over to monochrome mode to work on making some very Ansel-esque looking shots. 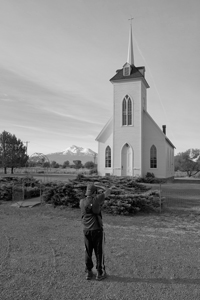 The next location was also unique; an old run-down cabin sitting on the prairie, with Shasta looming in the background. Whatever history this old dwelling once had has been long gone, as it now largely serves as a makeshift barn for passing cattle that need a break from the heat and sun. The class shot the decrepit building along with some friendly horses that were in a neighboring pen. The horses were great, even smiling and hamming it up for our cameras a bit.

Down from the barn and horses was an old steel bridge with a wooden base. That old bridge spans the lovely Shasta River, and made for a lovely photo opportunity. Composition was key for this location. The class worked on creating nice images that gave time and place to the visual treasures, and included Mt. Shasta whenever possible. 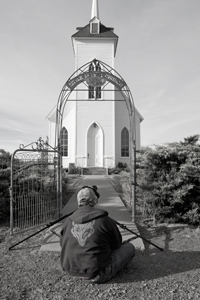 The morning was a full one, for sure, and the class was happy to have a few hours to rest and eat before setting back off for the evening portion of our workshop, which would include a hike to the majestic view from atop the ridge behind Castle Lake, at the base of Heart Lake.

On our way up to Castle Lake trailhead, we made a brief stop at the scenic gem, Faery Falls. A small 1/2-mile hike took the class from the parking area up past the stone ruins of an old resort, to the wonderful little secluded waterfall. Scott and Brian helped with composition, use of polarizers and extended shutter speeds to help the class get some really nice images of this off-trail waterfall.

After the waterfall was captured, it was time to bag our last shot of the evening, the shot of Mt. Shasta with Castle Lake in the foreground. This is not an easy hike, as a mile trail climbs about 800 feet in elevation change from the parking area to a rocky granite ridge high above the popular Castle Lake. But the class was tremendous, and made great time to the ridge, where our efforts were rewarded with cookies brought by one of the students... and a nap in the sun on the rocks surrounding Heart Lake. It felt great to rest in the cool mountain air, as the breeze blew and calmed the flushed skin and used muscles gathered on the hike up. 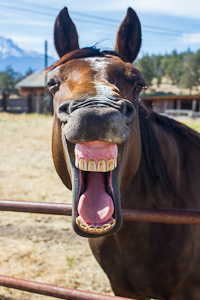 When the sun began to set it was time to move from the edge of Heart Lake to the ridge, to set up compositions. The cool breeze we had enjoyed at the lakeside had been replaced by a stronger, colder wind, so everyone hunkered down to get out of the wind to better ensure a nice shutter speed without camera vibration, while also finding a composition that showcased the area in a way this beautiful area deserved.

Brian and Scott mountain-goated along the ridge, hopping from student to student, making sure everyone had the filters they needed and they were ready to photograph the light as it began to fade. The light on Shasta that night was spectacular, and the warm glow in the sky helped to create some really wonderful images of the mountain.

When the last bit of light had left the mountain, it was time to dawn the headlamps and flashlights and hike out. A perfect end to a long and very productive first day in Shasta. The class was great and everyone made it back to the hotel happy and ready for a second day... starting in only a few hours. 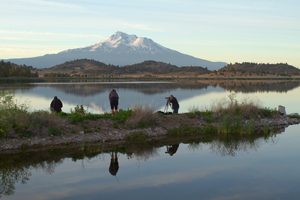 The 2nd day was primarily about waterfalls. We spent the morning in the McCloud area photographing the lovely little lower McCloud Falls, and the larger, more impressive Middle Falls. The middle section of this waterfall is a lovely curtain fall with numerous compositional possibilities.

The class spread out high and low looking for wonderful ways to showcase this great waterfall. Instructors helped with compositions using foliage, rocks, reflections, and curves in the rapids as foreground interest. They also helped with white balance and other camera settings to ensure a properly colored and exposed image.

The next waterfall was small, but very fun to shoot. Hedge Creek is a tiny little fall that drops over a basalt cliff in a narrow little gorge just north of Dunsmuir. This waterfall is special because of its access. One can not only create shots from in front of the fall, and use the rocks and water to help create an interesting composition, but the trail walks behind the waterfall and allows you a different perspective looking out from the cave behind the fall. It was a real favorite for the class, and we spent nearly an hour there making a variety of compelling images.

Still tired from their previous night, the class took a mid-morning break to catch up on sleep, and get some food at one of Shasta's many restaurants. We met again in the early afternoon for a couple hours of processing and image review. Scott and Brian took a few of the students' shots and went over some of the tips and tricks they use to bring out the best in an image. The class was pleased and really soaked up the information provided. 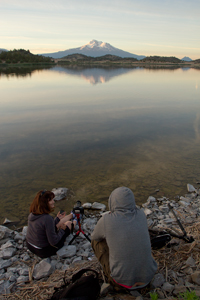 The last part of the day saw us moving our group from Shasta to neighboring Redding, only 50 miles away. Redding, CA, not only boasts a higher population than its northern neighbor, but a considerably higher temperature as well. The thermometer showed 107 degrees when we pulled into the parking area at the Sundial Bridge. The class was instantly aware of how nice the cooler northern temperatures had been, and longed for the air-conditioned goodness of the ApCab. After the shoot, we reloaded in the van, and it was time for a brief food stop before heading east to the town of Burney, and the large spring-fed Burney Falls.

Burney Falls, with its deep cobalt water and numerous tiny waterfalls, is one of the true gems of Northern California. The cool mist and breeze at the bottom of the falls was a welcome relief from the hot temperatures in Redding, and the class really got into the photography here, climbing on rocks, getting in the water, and making the most of this wonderful waterfall.

While at Burney Falls, Brian and Scott helped students set up their compositions, held cameras while they positioned themselves on rocks, and then looked over their shots when they were done. SO many nice images here on the students' cameras! The class chose a great variety of compositions and shots, from distance shots of the entire falls, to many nice detail shots of the small intimate streams flowing out of this volcanic cliff side.

We spent nearly two hours exploring the waterfall from numerous angles and vantage points; from down in the river to high above the falls. The class shot this waterfall from any and every angle. It was a cool (literally) way to end this portion of the day.

Once the class had loaded up, it was time to head south again, back to the heat of Redding where we would shoot one last image...the iconic Sundial Bridge at night.

Once on the bridge, Brian and Scott worked with the students on how to compose images of this bridge and its lit walkway. We took images looking down the space-age green-glassed walkway, as well as from the side. The bridge is a landmark in this community, and we really worked to do it justice with our cameras!

It was another stunning way to end another very full day of photography. Our cameras had been busy for almost 12 hours each day in the field, trying to capture some of the best that Northern California has to offer. From landscape to cityscape, this workshop had it all! Best of all, the class really came through with some stunning images. It was a real treat to work with them!

Brian, Scott and the rest of the Aperture Academy team