Nestled up in the rolling hills of Northern California sits the impressive and stunning 14,162 high, Mount Shasta. The mountain and surrounding region is picturesque to say the least. Snow capped peaks, lakes, rivers, waterfalls, and fields of lavender, are some of the lures that draw thousands of visitors each year to this area.

On this particular weekend in June a group of 13 photographers were drawn here by the Aperture Academy, instructors Ellie Stone and Scott Donschikowski, and their desire to learn, whilst photographing the stunning landscape of the Mount Shasta region.

Scott and Ellie assembled the group on Friday evening to start the weekend of photography and fun in traditional ApCad fashion, with an orientation. Getting to know all the students by name and learn their expectations for the weekend is vital information to the instructors, as it allows them to tailor to each individual's needs throughout the weekend. During the orientation, Mother Nature was rearing her not so attractive side, in the form of a nice downpour. Don't fret exclaimed Scott; the clouds are just what we want for waterfall shooting, which was on tap for the first day. The instructors informed the group that a couple of long days of photography lay ahead, so they should turn in early for a restful nights sleep. 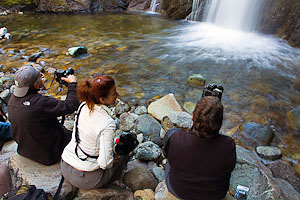 The group piled in to the ApCad van, which is affectionately dubbed the ApCab. All were anxious to start their weekend of fun and photography. First stop of the day was middle McCloud Falls. Beautiful and pristine the large falls is located on the McCloud River. The river meanders through the Shasta-Trinity forest before it flows into the nearby and highly popular, Lake Shasta. Even though it was early in the day, some of the spirited and adventurous kicked off their shoes and walked into the river, for some fantastic vantage points. Ellie and Scott assisted with composition ideas, as well as the appropriate shutter speed for achieving that smooth dreamy water, while still capturing a bit of detail in the flowing river. This is a large waterfall with many different vantage points possible, so the group spent plenty of time here, capturing many different angles. Once everyone had their fill at McCloud, it was time to move on to another location, Hedge Creek Falls. This is a much smaller scale then McCloud Falls, but very highly visited. Folks who live and visit the Mount Shasta region are often very spiritual, and Hedge Creek Falls seems to have a special place in their hearts. Maybe it's the easy access? The walk down to the falls is relatively short, but one can also walk right underneath the small cascade of water. This offered a challenge to the photographers, but patience and persistence paid off. The lighting conditions were a little uneven here, so Ellie and Scott demonstrated how the use of graduated neutral density filters assists in achieving a balanced exposure. Memory cards were starting to fill, and batteries draining, good thing it was time for a mid-day break. 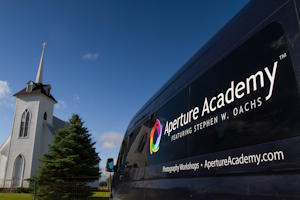 After a nice long respite it was time to head back out to yet another lovely waterfall. By this time most of the students began to understand what shutter speeds worked best to achieve that smooth and dreamy quality to the water. Again the instructors helped with composition and well as the use of graduated neutral density filters. Scott and Ellie always try their best to achieve one well-balanced exposure in camera, rather then blend several after the fact. However, there are always incidences that warrant capturing two or more exposures and then blending them later in post processing. Good thing Scott was on hand to assist with this, as he is ApCad's resident Adobe Certified processing guru.

As the day went on and the clouds appeared to be breaking up, the group made their way to the final shooting location of the day in hopes of an amazing hike and equally amazing sunset. Mother Nature had other plans in store, as more clouds started to move in, and the weather forecast seemed to change by the minute. Good photographers usually have several methods of checking the weather on their smart-phone. Scott and Ellie where diligently checking and re-checking the forecast, to see if they needed to implement “plan-b”. The group was torn, some wanted to gamble and make the hike for sunset, even though the clouds continued to roll in and look ever ominous. The instructors decided to go with their backup plan and take the group down to Lake Siskiyou for beautiful lake views and possibly Mt Shasta (if the clouds were to part). Even though the clouds never moved from in front of the large mountain the group had a great time learning how to capture long exposures. With the scenic lake as their foreground, and all the wonderful clouds making up the remainder of the scene, the most important addition was a 10-stop filter. The results were unique and exciting, with the up to three minute exposures causing the clouds to streak across the sky. Once everyone had their fill of these thrilling long exposures, it was time to call it a day. Scott and Ellie drove the group back to the hotel for another much needed night of rest, as an early start for day two was on the horizon.

The start time for day two seemed to be almost the middle of the night, rather then the morning. Good photographers rise early in order to drive to a location before the sun comes up. Beautiful colors usually appear in the sky well before the sun actually crests the horizon. Even though some clouds still lingered from the previous night, there were some beautiful cloud reflections in the glassy waters of the lake. As the group waited for mount Shasta to play peek-a-boo with the clouds, a small group of Pelicans trolled around the lake for their morning meal. Those with telephoto lenses had a blast capturing the majestic birds. As the mountain finally made it's appearance from behind the cloak of clouds, it was like a magnificent magic trick, and shutters clicked in rapid succession. The morning was still early, but it was time to hit the road for the next location. 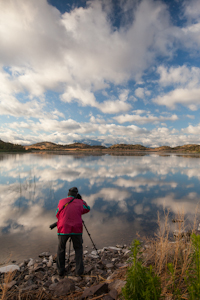 The little Shasta Church sits in the town for its namesake. It is indeed a little town and the charming church sits right in the center of this quaint farming community. Ellie and Scott assisted with some composition ideas, encouraging the students to change up their standard viewpoints and lie on the ground and capture some dynamic wide-angle shots. A few more locations were still on the agenda before break time, so the gang headed down the road.

A quick stop at a cool old barn, featuring the spectacular mountain in the background, was next on the list. A few different vantage points and more graduated neutral density filters, then it was time for the last stop before break time.

The Mount Shasta Lavender Farm is discreetly tucked in a hillside slope, and down a long dirt road. This is the type of location that could easily be missed by the average passer by. It was a good thing that ApCad knew of this delightful destination. As you drive up to the Lavender farm and see the magnificent mountain in the background, it's as if you've been transported to France. The French and culinary plant is laid out in perfect rows of purple. Bees are busy hoping from flower to flower, and could care less about our presence. The group quickly scattered, giddy with anticipation of gathering some spectacular images. Wide angle, macro, and telephoto all work at this stunning location. After everyone had ample time to gather images, it was time for Scott and Ellie to set up a group shot of all the participants. A group shot is a fun way to remember the good times of a long and productive weekend. 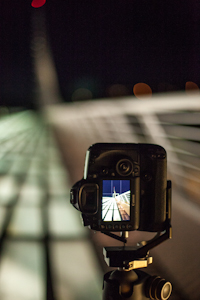 After a short nap, it was time to meet up for some post processing skills. Scott demonstrated how to blend the two exposures from the Waterfall location on the prior day. After a good hour and a half of processing techniques it was time once again to hit the road for more photography. The gang caravanned down to the town of Redding. A quick snack and once again they headed out to the last of the waterfall locations. The instructors did indeed leave the best for last. Burney falls is an enormous and truly exquisite waterfall. With multiple and seemingly endless shooting possibilities, one could spend almost an entire day at the location. They ApCad group didn't have all day though, so Scott and Ellie once again floated around assisting with proper exposures and compositions. The light started to fade and one final location remained, so they packed up once again and headed back to Redding.

Redding's Sundial Bridge would be the final stop on this whirlwind of photography adventure. The 700-foot bridge is easy to photograph due to its pedestrian only foot traffic. Completed in 2004 and designed by Santiago Calatrava, the bridge is a symmetrical and dramatic architectural statement, which makes it the perfect photography subject. Tripods and long exposures would be required to capture the impressive lines and shapes the marvelous bridge has to offer. It had been a long weekend, packed with fun, photography, and learning. Scott and Ellie said their goodbyes to all the excellent students, and another successful weekend for ApCad was in the books!

Scott, Ellie and the rest of the Aperture Academy team