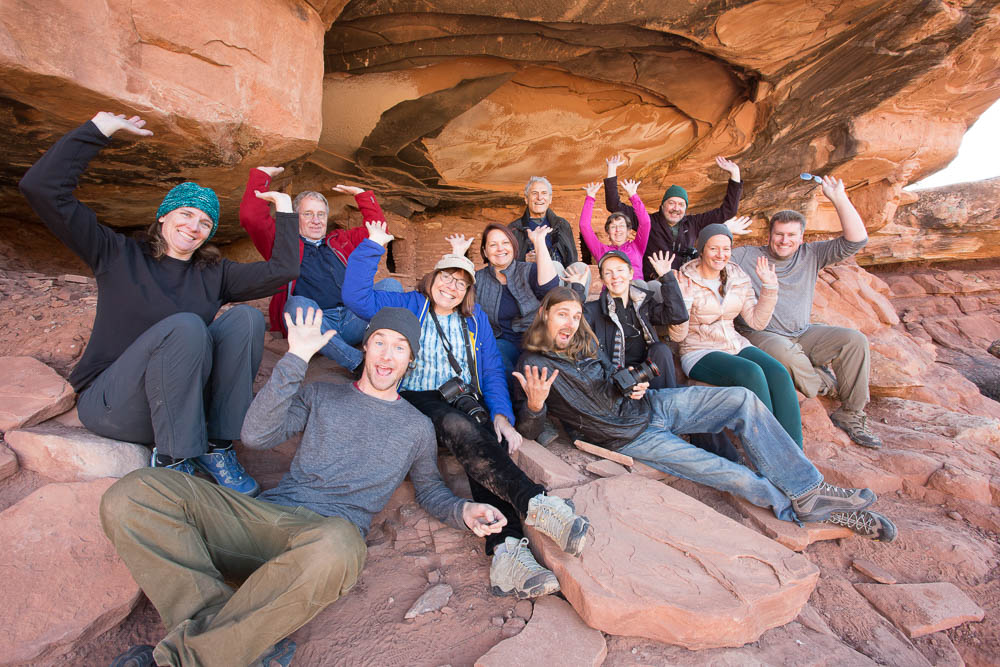 Have you ever wondered what it would be like to step back in time 1,000 years into the history of the Southwest and catch a glimpse of life from a past age?

The four corners of the American Southwest is rich with ancient stories told by the remains of civilizations long past gone. This region is comprised of southeastern Utah, northeastern Arizona, northwestern New Mexico and southwestern Colorado and is a wonderland for those interested in early civilization. Built into giant sandstone alcoves, the Ancestral Puebloans (Anasazi Tribe) carved their homes into these ancient canyons. Not only are these remains wonderful to admire with one’s eyes but are very photographic as well.

Stephen Oachs, Mike Wardynski and I took a group of photographers into the depths of these magnificent canyons for a first hand look at the artistry and incredible architecture of these people.

Day one: our first location was a visit to one of the most photogenic ruins in the Cedar Mesa, properly named Fallen Roof. This arrangement of Anasazi Granaries is tucked back into a giant sandstone alcove overlooking a giant wash. The crumbling roof above the ruin appears to have a metallic, almost oily sheen and looks great in both color and black and white. The students spent about 2 hours photographing different compositions and after a quick group shot we high tailed it back to the van.

On our way back to to the hotel for a lunch break we pulled into to Goosenecks state park for a quick snap of the mighty San Juan. This is a great spot to take a few quick snaps of the perfect example of erosion over time. The canyons drop down as far as 1,000 feet down to the muddy San Juan river below. 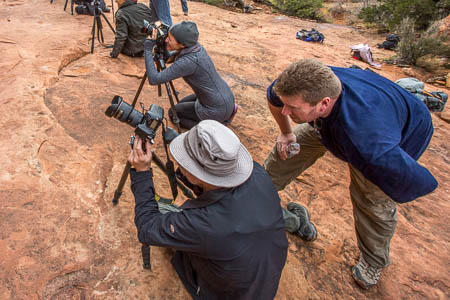 After break we headed back out to a National Monument designated by Theodore Roosevelt back in 1908, Natural Bridges. We hiked in to a ruin visited by very few people and photographed by even fewer. This ruin occupies a large alcove and is adorned with large streaks of lichen that seemingly climb down the walls. You can tell that this is a lesser known ruin because of the pristine condition of it, even after 800+ years since it was inhabited. The group photographed this location for well over an hour as the sun sank low on the horizon and provided some nice warm, diffused light. It was starting to get dark so everyone turned their headlamps on and began the journey back.

Before heading home we hiked down to one of the three magnificent Land bridges, named Owachomo. After getting set up in the dark and taking a few base star shots, Stephen light painted the giant mass of sandstone to bring life to the scene. After spending about two hours here we headed back down to the hotel to call it a day.

The next morning we got up early and headed out to one of the more known locations in the area, House on Fire. Although this ruin is more popular than some, it has some of the most excellent photographic opportunities. The seemingly carved striations above the granaries appear to be on fire as the light bounces around the walls of the massive wash. Here we photographed several granaries, handprints and some ancient petroglyphs. After the students were satisfied we headed into the town of Blanding for a stop at the “world famous” Big B for lunch!

That evening in attempts to escape the rain we drove to Monument Valley in Arizona to try our luck with the sunset. Upon arrival the students captured some epic storm light. Mike, Stephen and I helped the group counter the heavy winds, by weighing down their tripods.

The next morning we did some post-processing for a few hours to avoid the rainstorm. The group had tons of great material to go through and we showed them some new tricks to try in Lightroom and Photoshop.

As the storm made its way past us we took an afternoon break and went back out that evening to Natural Bridges National Monument. When we arrived things were not looking good. The sky was dark and the rain was still falling. We decided it would be wise to wait for 15-20 minutes and reassess the situation. After waiting we were relieved to see the storm had completely faded away. We hiked down into a 1,000 foot canyon to a ruin up on a high shelf of sandstone. This ruin was hard to get to so the students photographed it for hour or two working with different compositions, while Mike, Stephen and I helped them with different ideas. As the light started to fade we decided it was time to make the long journey back up the steep Canyon.

On our last day we headed out to Comb Ridge for a hike out to a forgotten Pueblo City. This ruin encompasses a very large sandstone canyon littered with Native American history. There is no shortage of photographic opportunities here. The students worked from the front to the back while admiring the many pictographs, hand prints and 800-900 year old corn cobs scattered along the ruin.

When we returned to the hotel we sadly siad goodbye to our new photo-friends.

Stephen, Mike, Phil and the rest of the ApCad team!