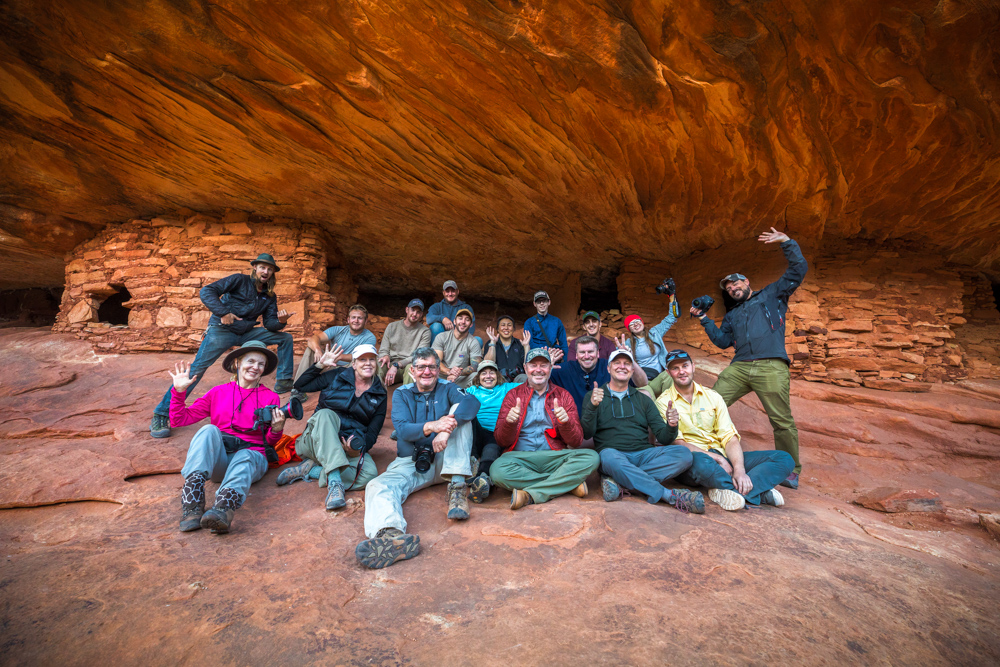 During the 2016 Southwest Extreme, Stephen Oachs and I began to discuss the idea of renting Jeeps for the 2017 Southwest workshop. After a few months of planning and hammering out the logistics in the office, Monique and Stephan had created a workshop worth all of the hype. This year we would not only be traveling by 4x4s, but we’d also be sleeping under the stars for two nights! On October 31st, a group of adventurous photographers met in a hotel lobby in Bluff Utah. There we had the chance to meet everyone as well as explain the itinerary for the next four days. After orientation, we hurried to bed so we could be well rested for the following morning.

The group woke up early on the 1st and piled into our Jeeps. After about a forty-five-minute drive into Bears Ears National Monument we had reached our first hike of the trip. It was a two-mile roundtrip hike to one of our favorite ruin sites on the Cedar Mesa. The group took turns photographing the ruins from a variety of locations. Once everyone had their shots, we hiked back to the trailhead and headed to our camp site which was located above a beautiful canyon. Once camp was established, many people took the opportunity to sneak in an afternoon nap while others went out and explored the surrounding area. 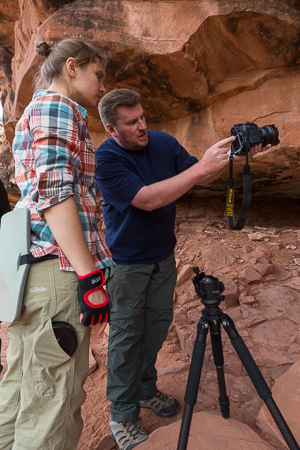 At three O’ clock the group reassembled and started the second hike of the day which conveniently started from our camp location. After about a mile and half on the trail we approached a wonderfully carved natural walkway high above the canyon. At the end of the walkway there was a spectacular mound of sandstone which offered shelter for the Anasazi Native Americans who lived there hundreds of years ago. We waited for the sun to drop below the canyon walls so we could shoot the ruins in soft light. Once the group had gotten their shots we started our hike back. Halfway back to camp we noticed the most beautiful cloud iridescence that anyone had ever seen. The entire cloud was an illuminated rainbow! Once we arrived back at camp we ate dinner and and shared our company with one another.

The next morning, we had another early rise to ensure that we had enough time to pack up our tents and eat a bit of breakfast before hitting the road. Once everyone was packed up we headed to the trailhead. We hiked down a wash for about three quarters of a mile and photographed a very well preserved set of ruins that included a spectacular kiva. After an hour or so, the group wrapped up and we hiked back to our Jeeps. We then headed to the camp location for our second night. It was a slow drive down a rough road but the location was well worth the drive. When we reached camp we were greeted with a spectacular 180 degree view overlooking The Garden of the Gods and Monument Valley. Just like the day before we set up camp and half of the group took naps while the other half explored the area. Around 3:30 Scott and I took the group out to a vista point to photograph sunset while Stephan and Monique prepared a delicious dinner. After sunset the group went back to camp and enjoyed dinner and a fire together before heading to bed. 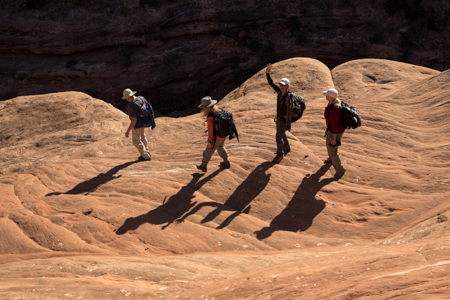 On the third morning, the group woke up for sunrise and we took advantage of the beautiful vista for a second time before having some home cooked scrambled eggs and bacon. The group then packed up camp for one final time and we hit the road. The next stop on the list was a huge pictograph of a bear. The bear must have been seven feet in length and one of the best pictographs that I have seen. We then hiked to another panel that had mostly collapsed but was worth taking a look at since we were in the area. The group was getting pretty hungry by this point so we took them to the Patio burger joint in Blanding. This place has some of the best burgers and shakes in Utah! After lunch we headed to another one of Cedar Mesa’s best preserved ruins. Soon, the sun was setting and it was time to head back to those glorious hotel beds that we left back in Bluff three days ago.

On the morning of the final day the group met up in the hotel recreation area to go over post processing techniques in Lightroom and Photoshop. Here we helped students pick out their best shots and helped them turn their images into fantastic works of art.

This workshop was one of the most exciting and fun workshops that I have taught and I think Stephen and Scott would agree with me on this.

Stephen, Scott, Mike, and the rest of the Aperture Academy team