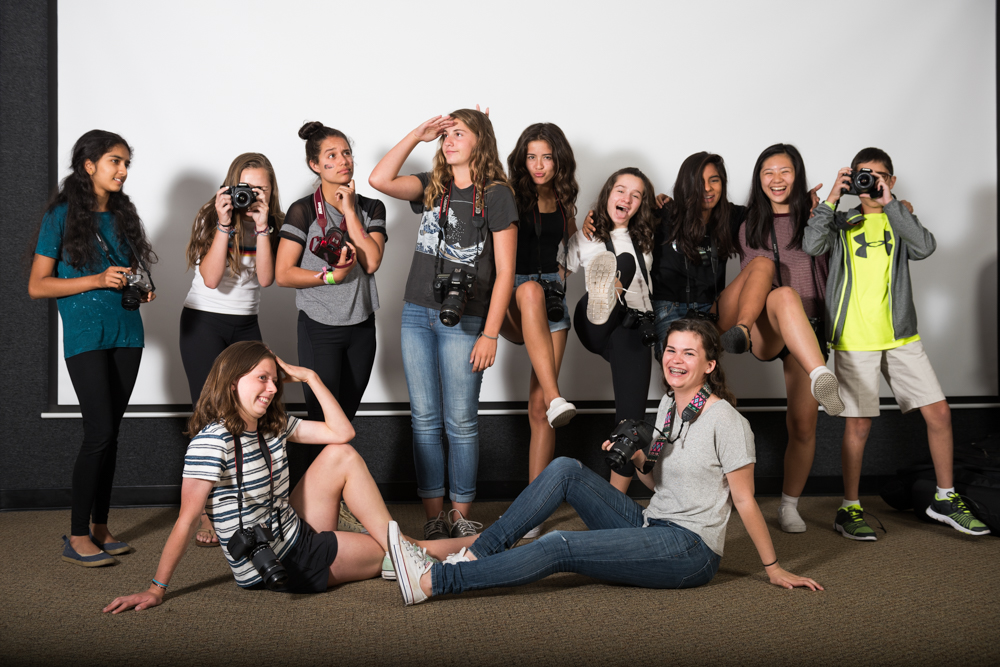 Ever since I was a kid, I have always associated summer with freedom—the freedom to learn, to explore, and to do what I want. Coincidentally, now that I am a teacher, it isn’t much different. I spend my free time continuing to learn my craft as a photographer and explore new places with my camera, and this year, I was lucky enough to share the journey with an amazing group of kids. Nature photographer, Mike Wardynski, and I spent the week teaching eleven energetic students about their camera and the art of photography—from studio portraits to landscapes, there was never a dull moment!

I didn’t know what to expect from the students on the first day. Although I teach high school photography in every other season not named summer, I was still nervous to meet the group and live up to their expectations. We started off with introductions in the beginning of the day, and then dove right into portrait photography. The students first browsed the web for studio portraits they felt were striking, and then we divided into two groups. The first stayed in the studio with me, while the second went outside to work on natural light photography with Mike. In the studio, direction of light was the most important aspect we focused on. How many lights were used in take the picture in the example? Where was the lights positioned? We talked about how lighting affected mood and just had some fun experimenting with different lighting set-ups. Mike on the other hand, showed the students that while you can’t control natural light, you can position of the model to avoid harsh lighting. The students worked with backlighting and photographing in the shade for soft, indirect light while using their telephoto lenses to obtain their desired background. 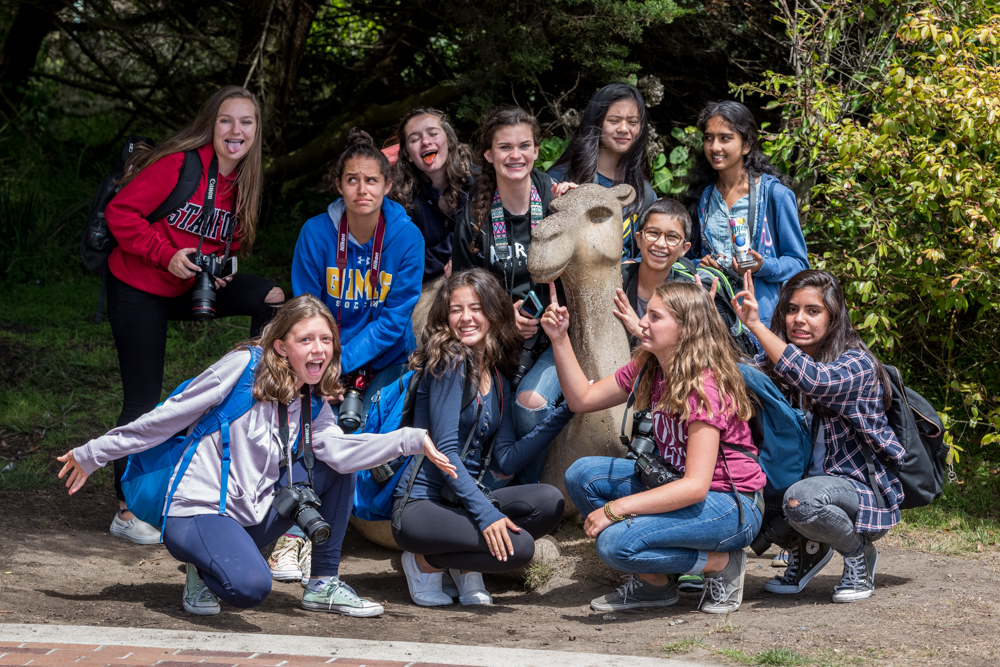 We broke for lunch while we uploaded our photos and then ran through the basics of editing in Lightroom when we returned. Proper organization is key when working in Lightroom; since Lightroom is linked with the original files on the computer, we made sure to emphasis uploading correctly. After the images were imported, the students rated their photos and began basic edits of tone, white balance, and color. We also practiced making a virtual copy and editing in black and white, and then with some local adjustments such as skin softening, teeth whitening, and iris enhance, finally ending with exporting the edits into JPGs.

We headed out bright and early to the San Francisco Zoo! Twenty-nine years as a Bay Area resident, and this was my first time visiting the SF Zoo. The trip did not disappoint! Mike and I took the students to the patas monkeys first. They were hanging out in the trees when we took out our long lenses to photograph. Normally, they are pretty speedy, but we must have caught them on a lazy day. We then moved on to the cats where the students got some gorgeous shots of the resting lions and the pacing tiger, but not before getting distracted with the penguins jumping in and out of the water. In order to capture the penguins’ fast movement, we had to raise our ISOs up, in turn bumping up the shutter speed as well. When we stopped by the bear country and were delighted when one swam right up to us near the glass. Shooting through glass was not the best in terms of sharpness and quality, but it was worth it to get some close-ups. 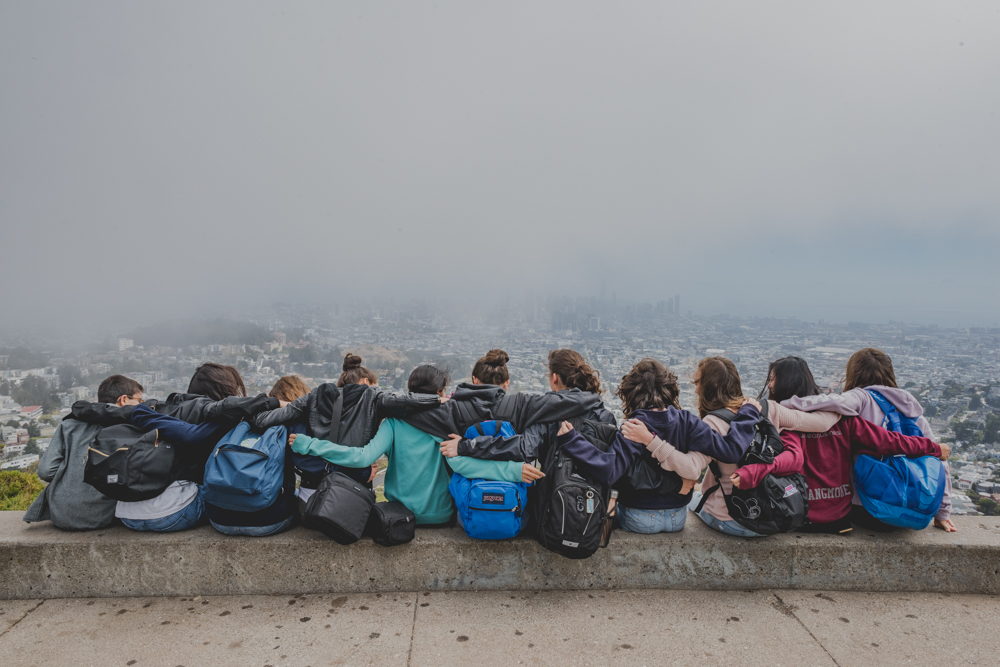 We stopped for a much deserve lunch at the Leaping Lemur Cafe after trekking through the rainforest where the group shot on 3200 ISO due to the dim light. I speeded past the anaconda without a single shot. All snakes scare me, and to see one that big was terrifying (much to the students delight). After lunch we swung by the giraffes—mother and child were in the middle of lunch themselves. This seemed to be the students favorite as the giraffes seemed like the most gentle creatures. Before we knew it, it was 3:00 and we were heading back to Aperture Academy to edit what we captured for the day!

Back in SF again! This time, we focused on cityscapes instead of animals. This was not only a change in mentality, but a change in settings as well. While we used a big aperture in photographing people and animals, with cityscapes, we wanted a small aperture to capture a deeper depth of field. So we had the students set their cameras to Aperture Priority mode at the first stop: Twin Peaks! As soon as we got out of the car, it was windy and foggy—not exactly the best conditions to be photographing the gorgeous view of the city, but we made it work! The students were so adventurous, not just settling for the view that most tourists get, but trekking up a path for a better angle, and documenting the people there as well. One of my favorite shots of the trip came was a candid photo taken at Twin Peaks of a boy with headphones. 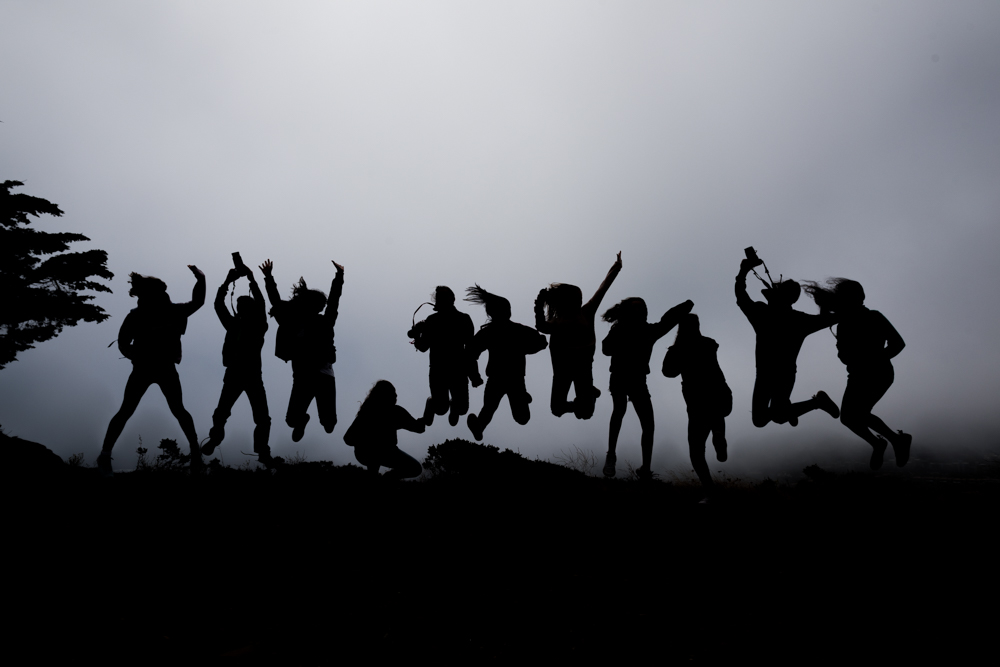 From there, we headed to the Palace of Fine Arts to avoid the fog. We photographed the architecture a bit, and again, with this social group of eleven, they also stopped to photograph the people around them (especially this friendly dog that captured their attention). After a scenic drive through Sausalito for lunch, we drove up to Battery Spencer to photograph the Golden Gate. Again, the fog was out full strength and covered up the top of the bridge, so the students opted to walk around Fort Baker and do a little photoshoot of their own.

We headed back to San Jose around 3pm, and Mike and I were shocked to see the kids still full of energy! They sang to the Hamilton soundtrack (much to Mike’s opposition) at the top of their lungs the entire way home, and with the horrible traffic that day, it was a two hour long musical. We got back JUST in time with one minute to spare before 5pm—thus giving the kids a bit of homework tonight with uploading and editing their photos during their free time. 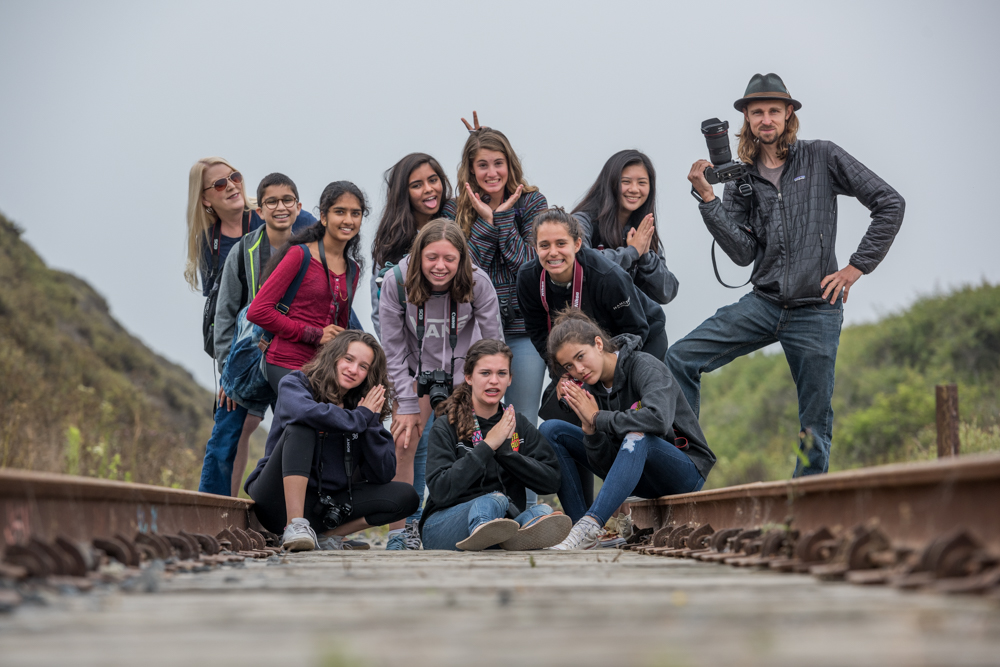 As a wedding and portrait photographer with a background in photojournalism, I would have to say today was my favorite day! Mike and I, along with special Aperture Academy guest Monique, first took the kids to shark fin cove in Davenport. We first used some leading lines to frame our subjects on the abandoned railroad tracks, and then hiked down to the cove. Some students immediate shook off their shoes and frolicked along the shore. The cave along the shore proved to be an interesting place to photograph as we were able to get some silhouettes, and practice a long exposure on the tripod. The long exposure was a hit with the students! There was a rock where the waves crashed against, and with a long exposure, we were able to get a nice, soft waterfall cascading down. As great as this seemed, we actually had to do a bit of improvising, as there was too much light to get a slow enough shutter speed at first. So we threw on some neutral density filters; they reduced the sharpness of the image, but allowed us to slow our shutter speed enough to blur the water.

We stopped at a burger joint at lunch, and then headed to the boardwalk for some people watching. The boardwalk was photojournalism heaven! Between all the families, workers, booths, and entertainment, it was impossible to not capture any good moments. Mike and I asked the students do create a portfolio of five to ten images that tell a story of the boardwalk. We started at the carousel, where Mike and I showed the students the panning technique: blurring the background with streaks of movement while keeping the subject sharp. Afterwards, we walked along the boardwalk and gave the students a little freedom to explore and photograph moments. 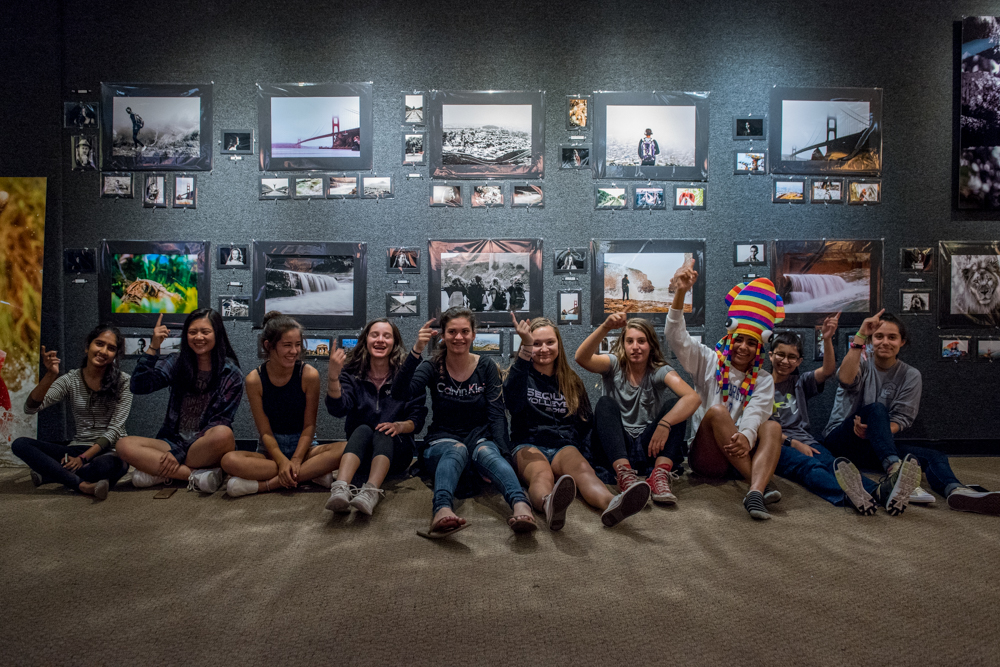 We ended the day by walking back along the beach. Mike took the majority of the group to get some group shots at the lifeguard tower while I stayed behind with a couple of the kids to try the panning technique again. The day ended with a quiet sing-a-long back to Aperture Academy!

Before we knew it, the last day of camp was here. The students arrived even more energetic than they did the first day! We spent the morning editing the pictures from the boardwalk and getting everyone’s photo story together. Once that was done, they started to narrow down their images to the top 5 for print—one large 13x19 print, and four 4x6s. By the time lunch came around, some students had finished editing and choosing, while others were still being picky about which photos to choose. 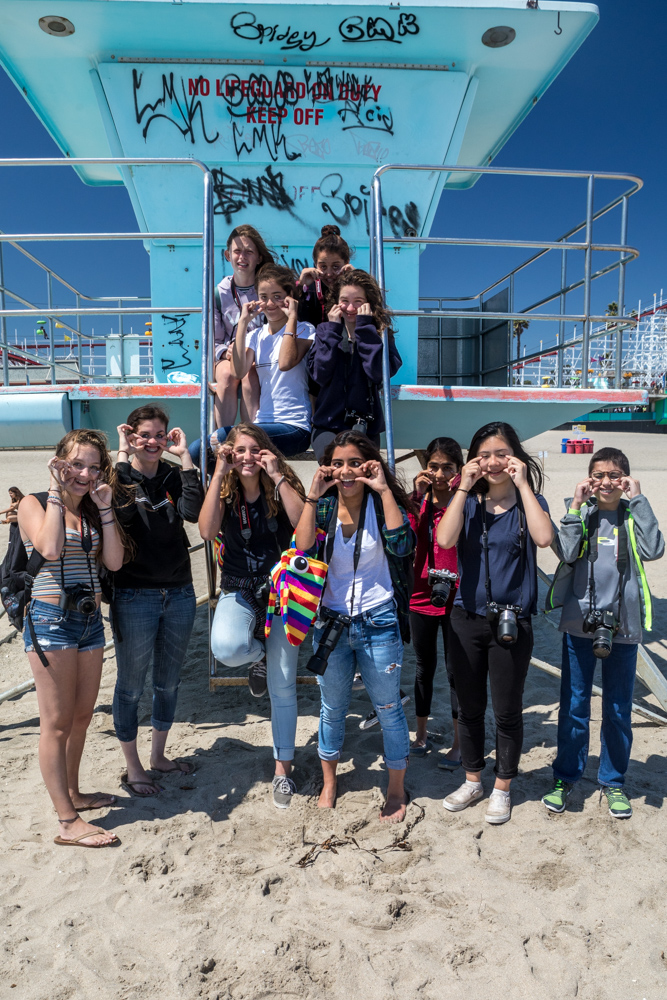 When we got back from lunch, we began the printing process! While Mike printed the photos, I, along with the students who had already finished began matting and packaging them to hang. When the final student finished, Mike and I continued the printing and matting process while they all shared their boardwalk photo stories. We were amazed by the shots they took—it captured the day perfectly! From the loving families, to the screaming kids on rollercoasters and the nonchalant workers, it was a perfect representation of Santa Cruz Beach Boardwalk. Mike and I were surprised that none of the students ended up choosing any of the images from their photo story in the final five prints.

We hung up the images by 5pm—just in time for the parents to come view the gallery. The students put so much hard work in this week (and doing it while having fun), and it was awesome to see their efforts rewarded by the compliments and smiles from their families! The group was sad to leave each other, but knowing this bunch, they will be hanging out again soon. Mike and I definitely miss their enthusiasm (in photography, not singing), and we hope they are able to take away some valuable skills!

Mary, Mike, and the rest of the Aperture Academy team are very proud of you