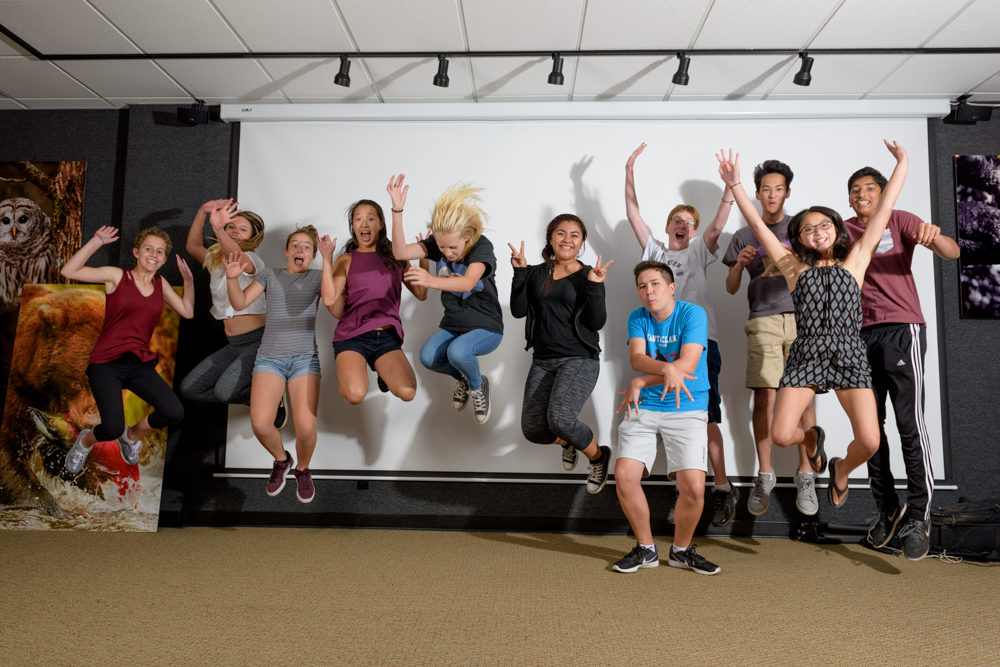 Ahhhh... Summertime! The streets are buzzing with people, the sun is warm, and fruit is in season! Best of all, school is out! Except for one exceptional group of students who decided to dedicate a week of their summer to hone in their photographic skills. Mary and I greeted a group of eleven talented teenagers on the morning of July 17th with hopes of showing the students how rewarding and fun photography can be.

We started off the day learning about each other and playing a quick little ice breaker game. I’m happy to say that I was able to fool the entire group while playing two truths and a lie. After we got to know one another, we dove right into portrait photography. Mary and I split the students into two groups. One stayed inside to learn about studio photography, while the other went outside to learn about natural light photography. Once each group finished, we swapped groups so everyone had a chance to learn both techniques. The second half of the day was spent learning how to organize and edit using Abobe Lightroom. Lightroom is a powerful RAW image editor that is used by pros across the industry and it is always exciting to see people use this software for the first time. At the end of the day we gave ample time for editing images and gave a rundown of what to expect the following day. 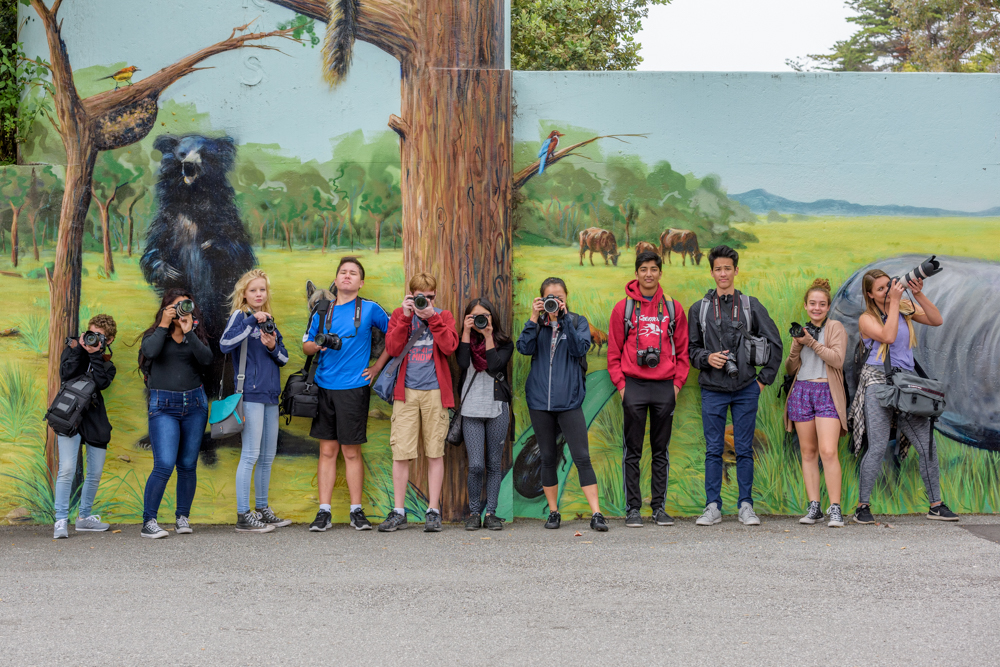 Day two was zoo day! We took our first summer camp fieldtrip to the San Francisco Zoo. The zoo is always a hit because everyone has their chance to photograph their favorite animal. (Assuming that the animals are not sleeping.) Luckily for us, most of the animals were quite active throughout the day. First we shot the patas monkeys which are the fastest primates in the world. The next stop on the list was the big cats section. The group photographed lions, tigers, and even a snow leopard. Throughout the day Mary and I would occasionally check in with the students to see how their exposure and compositions were coming out while giving creative feedback. The group made its way to the grizzly bears who were in the middle of a morning swim. This is always exciting to see since they will sometimes come right up to the glass where we view them from. At this point our stomachs were starting to sound like grizzly bears and we decided it was best to head to the Leaping Leemar Café for lunch time. After lunch, the group learned just how stinky flamingos actually are while they sneaked in a few quick shots. The group then made its way to the Africa section of the zoo to photograph, giraffes, zebras, gorillas, and more. By this point in the day we had worn the group out pretty good and decided to check back on the large cats before making our way back to the studio in San Jose. The students had enough time at the end of the day to upload their photos, sort them and squeeze in a few edits. 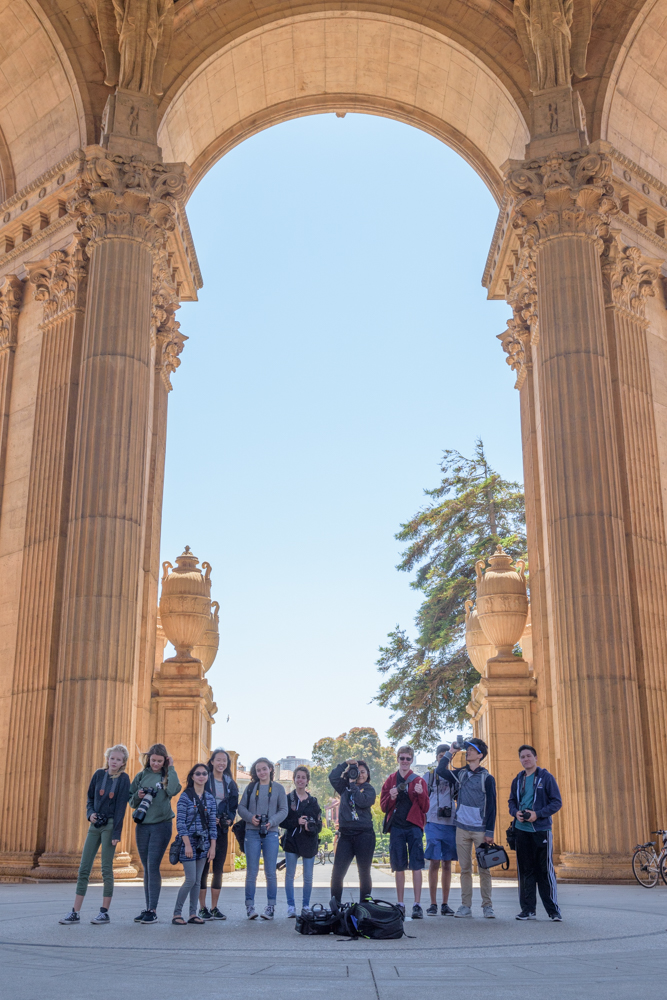 On Wednesday, the troop piled into the “Ap Cab” to try their hand at landscape photography. The first stop on our list was Treasure Island to photograph the Bay Bridge and San Francisco. Mary and I taught those who were interested how to properly shoot a set of panoramic images, which we would stitch together later using Lightroom. Following Treasure Island was the Palace of Fine Arts. This building happens to be my favorite building in the entire city of San Francisco. It looks like replica of a large Greek building and it was constructed for the 1915 world’s fair in San Francisco. Accompanied by a pond and a fountain, the structure just begs to be photographed. First we shot the front side of the building from across the pond and then we walked around to photograph the beautiful architecture that can be found within. By this point the group was getting a little hungry, so we took a break at Taste of Rome in Sausalito to recharge. After satisfying our bellies, we were ready to continue our shoot. We took a scenic drive up to the Marin Headlands for a classic view of the Golden Gate Bridge with San Francisco in the background. Although the headlands are often windy, the views make the trip worth it every time. After trying out a few different compositions, we drove down to Fort Baker to shoot a large ship entering the bay underneath the Golden Gate. Before long the day had slipped away from us again and it was time to head back to San Jose to see what we had captured from our adventures.

Thursday was the last fieldtrip of summer camp, and this time we were heading south to the Santa Cruz area. We started the day off at Shark Fin Cove which gets its name from large fin shaped rock that rises out of the middle of the cove. Before heading down to the cove though we took advantage of some old railroad tracks to show examples of leading lines. Then we took the group down to the water to experiment with long and short shutter speeds to see the different effects that they have on an image. As enjoyable as the beach was, we had to continue our day and get some lunch. We took the group to a great little Santa Cruz gem called Burger for lunch. Despite the name, they actually make some pretty good wood fired pizzas too! Once everyone had finished eating, we took the group to the Santa Cruz boardwalk to practice documentary photography. Mary and I told the students to try and tell a story by capturing ten images that explain what the boardwalk is. We spent a few hours documenting the colorful display of people and rides before walking back to the vehicle along the ocean’s edge. The ride back to San Jose was rather quiet since most of the students had taken the opportunity to sneak in a mid afternoon nap. We arrived back at the studio with two hours left to upload and process images. 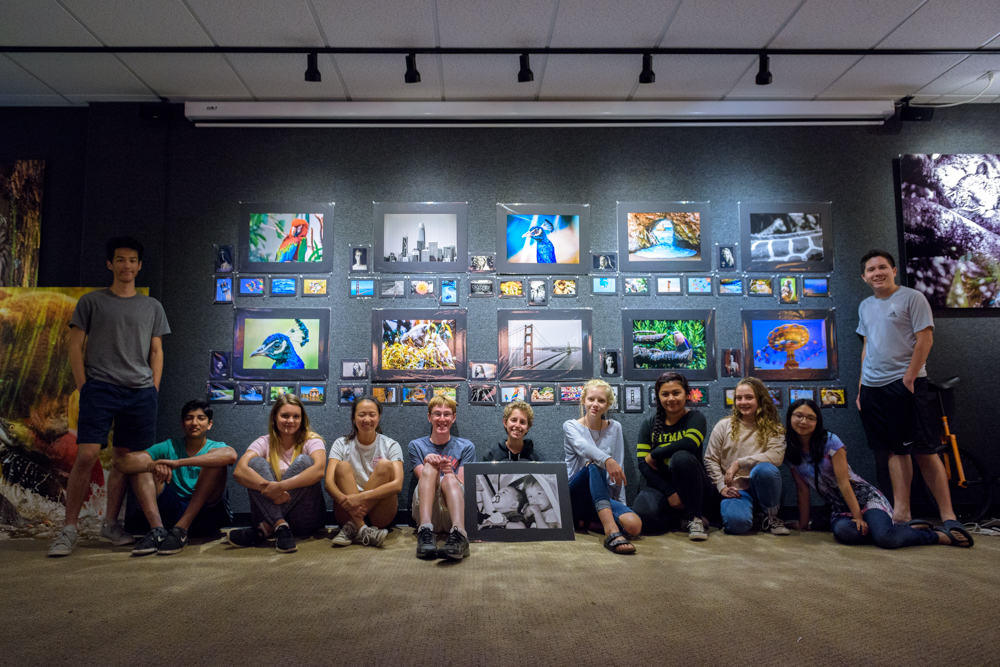 Friday was the day where the student’s hard work came to light. The beginning of the day was used to finish up any last minute editing. Mary and I then instructed the students to choose ten of their favorite images from the Santa Cruz Boardwalk to tell a story. Once the students were ready, we had them connect their computers to the projector to show the class what they had captured. Once we finished up the boardwalk slideshow and all of the students had uploaded the photos that they wanted to print, we sent them outside on a photo scavenger hunt. While Mary was keeping an eye on the students, I took care of printing their images. When the groups finished the scavenger hunt, it was time for a friendly competition to see which team had executed the challenge best. It was a close match but eventually we chose a winning team and that group got to choose where to hang their images first. Once the prints were hung on the wall, the group reminisced about the week and before we knew it, parents had started to arrive at the studio. The exhibition part of summer camp is always my favorite part. It’s the time that we see everyone’s work come to life and of course it is always fun to see the parent’s reactions to the beautifully hung work. Although I mostly teach adults, I must say that teaching teenagers is always a breath of fresh air and I hope the students continue to follow their passions and continue to peruse the joy of photography as a hobby or career.

Mary, Mike, and the rest of the Aperture Academy team are very proud of you