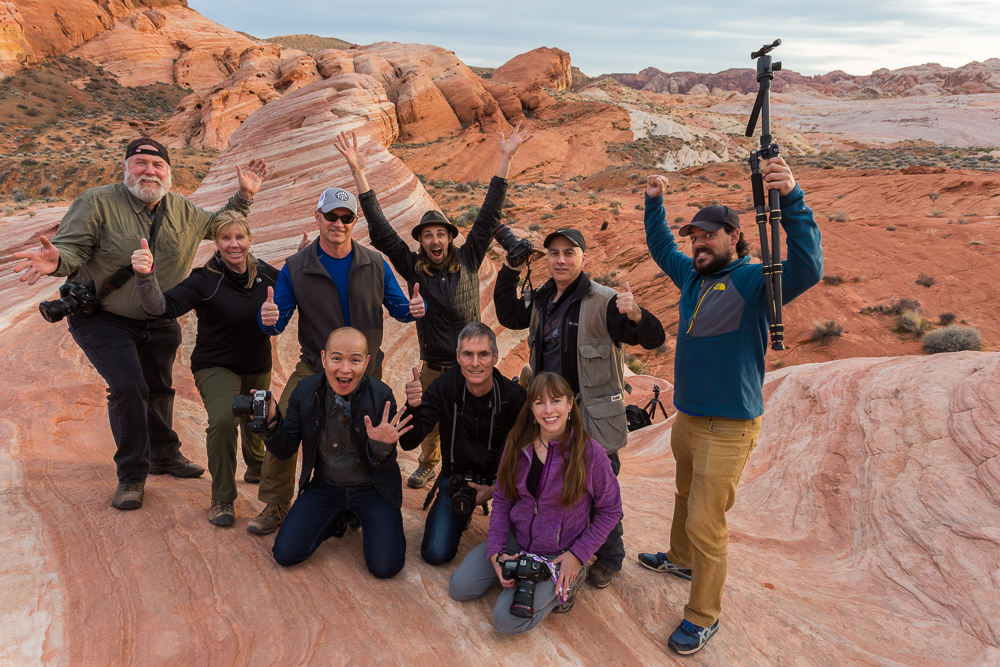 Valley of Fire State Park is a small, unassuming patch of protected land just north of Las Vegas, Nevada. Many millions of people visit the deserts of Nevada each year and make their rounds precariously close to this wonder of natural phenomena. I'm grateful for that. This park has all the trappings of a great National Park, but in a small package, and its size is its biggest enemy. But the great part is, after all these years, it still isnt crowded with the throngs of tourists you may see at one of its bigger more illustrious cousins. Its quaint, quiet, and ripe for photography. Fellow Aperture Academy instructor Mike Wardynski and I led a group of photographers to this small wonder to catch just of tiny glimpse of what this park had offer. So heres a little a story about our Valley of Fire Workshop for the early winter of 2017. 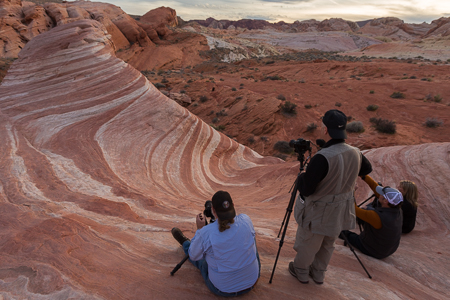 On an ordinary morning in North Las Vegas, Nevada, we awoke before dawn and happily greeted our group over coffee from the hotel lobby. With sleep still under my eyes, I brought the van around and we gathered up the group for our hour long journey towards the middle of the desert. Through the night sky, Mike and I were curiously trying to glean if there were any clouds in sight that would make for a more pleasurable sunrise shoot, but it was far too dark as made our way north on I-15 and then east on the Valley of Fire Highway. Once we neare the park and the first bits of light began to show on the horizon is was clear that we would have them: Clouds. Our sunrise spot this morning gets its namesake from the trademark "swoosh" emblazoned on the rock many eons ago. This is called Nike rock. We parked the van, hiked up to the rock, and gave out compositional guidelines, as to where to stand for the best angle and such. And then as the sun began to rise ever higher, we were greeted with absolute magic. It was a glorious sunrise, and to my knowledge, we were the only people within the area to have enjoyed it. We spent the 30 minutes of awesome color looking around for new places to shoot with the light, and then once the sun came up fully, we explored the area for even more scenes, which are prevalent around every corner. 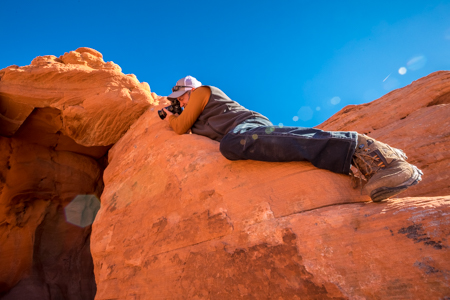 After much shooting, panoramas and intimates, we headed to a different area to explore some small cave like structures which are nearly imperceptible unless you know right where to look. The way the wind and moisture creates these structures is baffling to say the least, but they provide some of the most intriguing and confounding photos I've ever seen. With the right white balance and angle, these extremely small "caves" look like monstrous caverns the like of which are only found in remote places in Utah. We only could stay for a little while though, as when the sun crept further in the sky, the light encroached into these caverns and made photography nearly impossible. So we got back in the van and headed home for a much needed nap. In the afternoon we returned and made our way out to Valley of Fire's dominant attraction. The fire wave. The skies looked very promising our first evening, and the entire area is a giant smorgasbord of potential photographic opportunity. Mike and I helped our class search for the perfect place to shoot with the hour we had before sunset. And there are two equally stunning views in the area, one of the wave itself, and the other looking back at a monolith called Gibraltar Rock, which looks like a giant sandcrawler (you know, from Star Wars). The sunset that looked so promising failed to deliver its full glory, but we did have some nice golden light to shoot in before we eventually packed up for the evening. 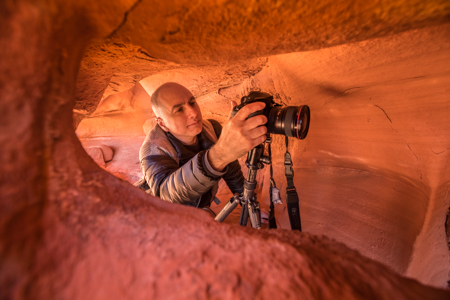 Much like the first morning, we spent the drive searching the night sky for clouds on our way into the park. The forecast had called for clear skies throughout the workshop, but that usually always ends up being a complete fallacy when rubber meets road. We hiked out to an area with many colored rocks and a vista of the most strange desert landscape you can imagine. Sometimes I'm amazed that what I'm looking at actually exists as it looks like father time dropped his paint can and spilled it all over the place, with the way the colored rocks are "painted." We had a flash of glory from sunset, with beautiful colors, but the cloud movement was too fast and covered up the suns light prematurely. So Mike and I let our class do some exploring around the area and pointed out some significant features to photograph. From there we hiked back to the van and drove a short way to the White Domes area, where we hiked another trail though very similar rock formations, arches, a slot canyon, and even an old film set. The slot canyon was particularly of interest to the group, as its entrance and exit are adorned with many interesting colorful formations which begged to be photographed. After eking the most out of the area we hiked back the van and made our way out of the park and back to civilization. After a brief nap and some food we met up in the lobby of the hotel for a couple hours of post processing and image review. Mike and I had our computers at the ready and discussed ways to "sweeten up" the photos everyone had taken using examples from the group. But before long the call of the wild was upon us and we saddled up once more and headed back out to fire wave for one last crack. Now that everyone was familiar with the area, having re-traced their steps from the night before, we got to work and settled in for our sunset shoot. The sky looked doubly promising, but our excitement was extinguished when the official sunset time came and went without a whimper. C'est la vie. Especially in the life of a landscape photographer. That being said, we didn't have to wait, or hope for Valley of Fire to deliver, as the landscape here is always absolutely astonishing. We just aimed our cameras downward instead of upward. And so endeth the adventure to Nevada's little park that could. The little gem, tucked secretly away in the valley beyond Las Vegas.