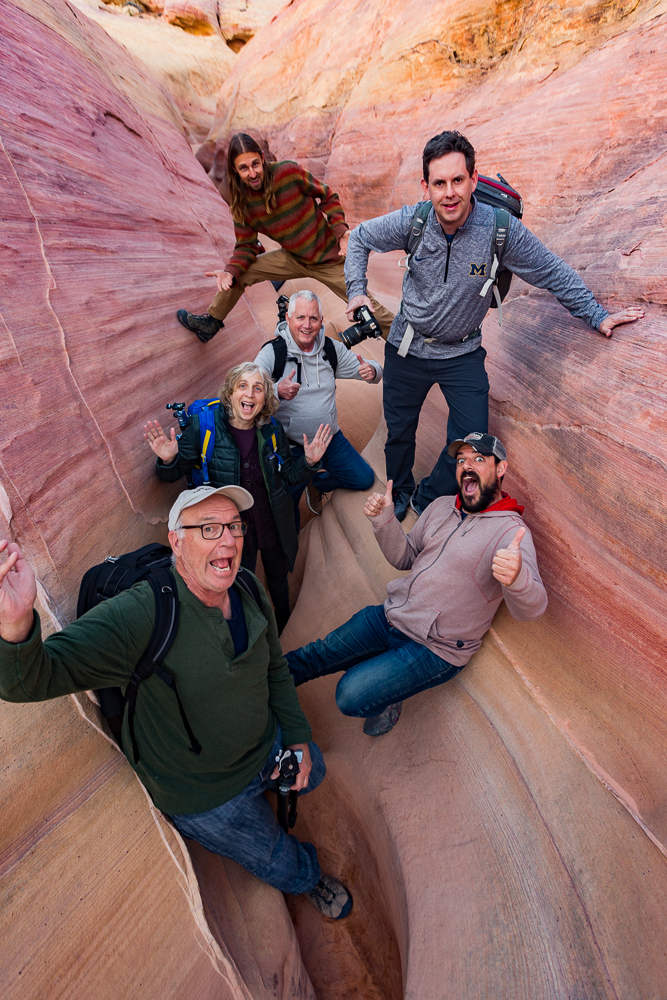 In the midst of the winter months at the beginning of each year, Aperture Academy takes a trip down the southern deserts of the California and Nevada. If you're unfamiliar with the area, just know that its expansive, more than 50,000 square miles! In all that desert, how do you choose where to photograph? Well luckily for us, there are places like Valley of Fire, which is a paltry 64 square miles. Thank god someone found it many years ago so we wouldn't have to! Aside from its size relative to the surrounding desert, Valley of Fire is an amazing little park run by the state of Nevada. Known for its multicolored sandstone, Valley of Fire, quite literally appears out of nowhere near the Moapa River Valley. One minute you're cruising through an ordinary desert landscape, and then, BOOM, the greyish ground gives way to monoliths upon monoliths of red rock. Its an amazing sight to see, and photograph!

We met our group of photographers in North Las Vegas, where would base our workshop for the next couple days. the park is only slightly inconveniently located, just north of Las Vegas by an hour or so. But with all the convenience that Las Vegas has to offer, it just makes sense for our adventurers to base there. At our orientation we met our group and Mike and I laid out the plans for the next couple days. It was nice to see returning faces, along with one new member in our Aperture Academy Family. And since our sunset comes early, we dismissed our group to get some sleep before our first day began.

I always like taking people to Valley of Fire if they've never been there before. Driving into the park before first light, not being able to see anything, your senses aren'e able to absorb anything and while you wait for the sun to rise, in every direction you look, its like sensory overload. Its like waking up on Mars or something. The park itself is gorgeous, but unlike other places we visit for photo workshops, Valley of Fire is one of the most challenging to work in. There really isn't a definitive list of iconic places with amazing vistas in the park, like you would find in Yosemite or Grand Teton National Parks. Valley of Fire is one big vista, and many many small ones just the same. So you really have to hunt around and find whats interesting to you. Thats the key. Thankfully there are two instructors who know the place pretty well, and between us two, theres more than a few places to keep everyone busy with shooting the multicolored rock. After sunrise at nike rock, which was very nice (for probably the first time ever!) we headed over to the arch rock loop to go cave hunting. There are two small cave-like features hidden in the rock that look pretty amazing once you find them and start pointing your camera. The begins to get a little tough by mid-morning, starting to come into the structures, so it pays to get there early while everything is still in shadow. After poking around this area, we went back to nike rock and finished up exploring that area to round out the morning. 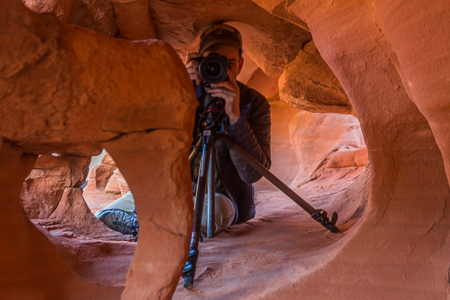 After our midday break we headed back into the park for our first crack at the fire wave. One of the most amazing things about Valley of Fire is just how unpopulated it is on the weekdays nearing sunset and sunrise. In all the years we have been leading groups here, I have never seen more than a handful of people out past midday. Its astonishing that with the some of the National Parks breaking attendance records year over year, that one can still enjoy relative peace while at an iconic vista. After a short hike, we made our way over the colored rocks and setup atop the fire wave in anticipation for a great sunset. And wow, theres not much to say other than that. The clouds lit up perfectly in pinkish hues, and reflected that light back down on the wave. And with nobody around, our group enjoyed the amazing show unmolested by time or traveller. Fantastic evening!

For our second morning hike we went out to the white domes area in search of a crazy hill. Literally. This place looks like someone dumped a bunch of paint down the side of this otherwise white slab of sandstone. In the predawn light we waited, and were generously awarded with another amazing sunrise! The clouds lit up again, and across the sky we saw nearly every color of the rainbow emblazoned above our heads. After the show, we quickly grabbed some shots of a nearby arch and then hiked down the white domes trail. This area isn't any more significant than the rest of the park, other than it has a very cool 100 foot section of deep slot canyon with lots of painted rock faces all around. We spent some time working the canyon and its surroundings, and then after a short stop at the fabulous visitors center, we headed back to Las Vegas for a much needed siesta. 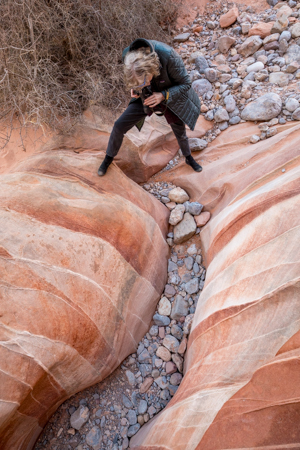 Lunch came and went, and then we spent a couple hours helping everyone post-process their images from the last day. With such great skies from the night before, it was pretty easy to tweak the photos just using Lightroom. But we cant stop there. Mike went on to a primer of what Photoshop could do with the right finesse (and probably scared a few people unfamiliar with the program) but with time a little practice, the techniques of luminosity masking aren't that difficult to wrap your head around. It just sounds scary, Luminosity Masking.

For sunset we headed back to the fire wave to hopefully shoot in the other direction toward gibraltar rock, which is a mighty nice too! But as fate would have it, the clouds started to disappear in that direction and form again more aggressively over the fire wave. With everyone hunkered down, in position to shoot what looked like an amazing sunset, the color just stopped short. This is where we have to take pause for a moment. Never under any circumstances should you leave early while a sunset is in progress. It doesn't matter how sure you are that amazing color wont happen, what do you have to lose? Are you in a hurry? The answer should be no, you are of course shooting landscapes, something that takes a lot of time and patience. So wait for sunset to be officially over, at least 30 minutes after the time of sundown. Okay, un-pause. Now, nobody left in our group. Where would they go after all? I just found it funny that one of group jokingly mentioned that he would walking back to his car at this moment, only to have the heavens open up once inside. To be fair to him, I don't think he would have done that, but it makes for a funny anecdote. Ill bet your asking yourself what happened to the sunset. Well it did in fact blow up. Nearly fifteen minutes after sundown, with no color in the sky up until that point, it just blew up. The light was even better than the night before. And thats why you should always wait at least 30 minutes after sunset. Yeah so, the fire wave, the place so nice we shoot it twice!

Thanks to our amazing group! It was a pleasure working with you in this amazing park. We hope to see you all again soon!