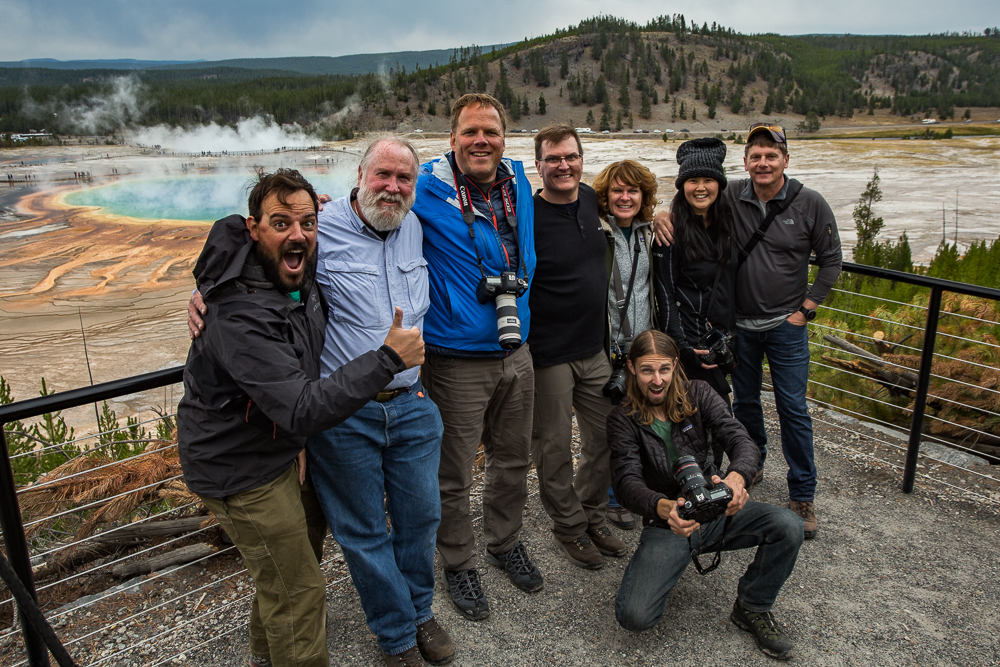 Autumn is one our favorite times of year at Aperture Academy. The air has started to cool, the leaves have begun to change, and best of all, the elk have entered their rut season. The elk rut is a remarkable sight to see. The bull elk, equipped with a full rack of antlers bugle to one another in a display of elegant power.

On September 15th Scott Donschikowski and myself met with an intimate group of six photographers for orientation. The group became acquainted with one another as Scott and I went over the itinerary for the the next three days. After the group’s questions were answered, we headed to our rooms to get some rest before the morning light.

After having a quick bite to eat I the lobby, the group left the hotel at 6:30am. An early storm brought a light dusting of snow with it creating a pleasant drive into Yellowstone. Shortly into our drive we spotted a beautiful bull elk in a field of snow. The opportunity was too good to pass. I pulled over and the group got their first taste of Yellowstone wildlife. We shot the elk for about a half hour and then proceeded to drive through Mammoth towards Lamar Valley. Nearing Lamar, we discovered a heard of bison amongst the fog. This was the groups first opportunity to witness bison so we pulled over again, although the fog proved to be rather difficult to shoot through. Once the group had their fill, we continued on to shoot a peregrine falcon in better conditions. The bird was perched next to its nest while it posed for our cameras. We patrolled the valley the rest of the morning looking for various types of wildlife, before we headed back through Mammoth Village. The bull elf that we saw earlier had made his way into the village with a few of his lady friends. It was snowing at this point which gave the group the opportunity see how difficult it can be to shoot in the falling snow. Eventually we packed up and headed back to the hotel for our afternoon naps and lunch. 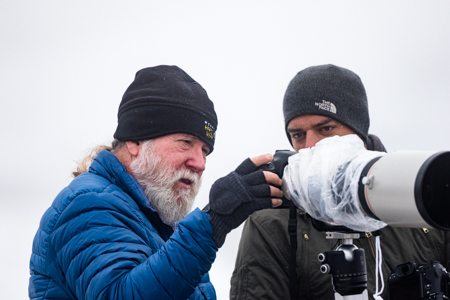 In the afternoon, we departed the hotel at three to head out for our second game drive of the day. This time we decided that we would try out luck in Hayden Valley. Before we even made it back into the park we spotted a heard of prong horn antelope that were just begging to be photographed. The students exited the vehicle and let those shutters fly. Driving through the park someone noticed a bull elk on a hill. We were able to position ourselves in such a way that the elk was standing in front of a beautiful mountain that was freshly covered in snow. Continuing on, the group spotted a heard of stampeding bison. This was very exciting indeed, so we drove ahead of the heard and photographed them crossing a small creek. Before long, we ran into our first bear jam of the workshop. I quickly put my parking skills to the test as I successfully pulled all four wheels off of the road in a very tight space. The group exited the vehicle and waited the black bear to walk into clear view for a photo. Driving in Hayden Valley, we did not see much in the way of wildlife but we did have the opportunity to see a grizzly bear far off in the distance. It was too far to photograph but it was fun to see none the less. On our way back to the hotel, we stopped on top of the Dun Raven Pass to capture some shots of the beautiful golden light that was painting the snow capped mountains. 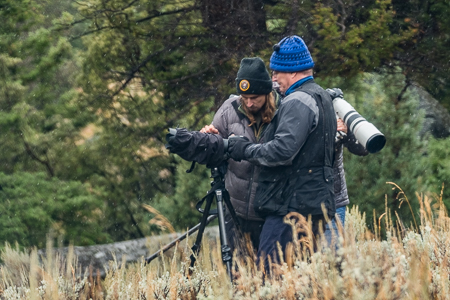 We left the hotel at 6:45 the next morning. Shortly after entering the park, the group spotted another bull elk. These animals are always exciting to shoot, so we stopped for a good while and waited to see what would unfold. After loading back up, the group made their way to Hayden Valley. As we entered the valley we were engulfed in a beautiful golden fog. Someone called out “turtle!” and Scott brought the vehicle to a stop in the next pullout. He turned the vehicle around only to find out that the turtle was actually a trumpet swan. The swans made for a nice photograph none the less and the stop proved to be worthy. On the Far side of Hayden Valley, the group photographed a lone bison walking down the road before we turned around and headed towards Canyon Village. Just before entering the village we saw yet another Bull Elk at close range. The group got out and shot away. Just as we were about to pack up, Scott noticed a coyote hunting in the same field where the elk just left. The coyote came quite close and even gave the group a few great poses. At this point, the morning was getting away from us so we headed back to the hotel for some rest.

For the second half of the day, we decided to search for wildlife in Lamar Valley again. Driving past the Osprey nest that we saw the day before, someone noticed the bird with a fish in it’s mouth. We quickly turned the van around and pulled into the nearest pullout. We photographed the event with much excitement. Eventually, a raven swooped down in an attempt to get a free meal. The osprey was quick though and flew off in a great display. Driving through Lamar we stopped for some bison and some bighorn sheep before making our way to Mammoth Hot Springs for a pleasant pastel sunset. 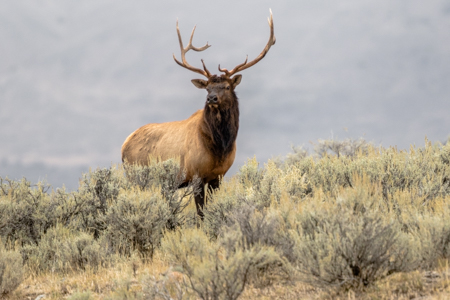 The third morning started off with, you guessed it… Another bull elk who was doing his best to keep the nearby cows to himself. After watching this display for a little while, we drove over to Artist Point to photograph Yellowstone Falls which is one of the most iconic views in Yellowstone. Luckily the morning was overcast so we didn’t have any harsh shadows in the canyon. After the group was satisfied with their shots, we made our way to Old Faithful because no trip to Yellowstone is complete without visiting the geyser basin. After the geyser erupted we sat down at The Old Faithful Inn for a delicious lunch. The next stop of the afternoon was The Morning Glory Pool which is a small but beautiful pool of water that fades from orange to yellow and eventually falls off into a deep green hue. The final stop of the day was an elevated view over Grand Prismatic Spring. This pool consists of just about every color of the rainbow and is an example of some of nature’s finest handy work. The group gathered their shots and then we made our way back to the hotel as dusk began to fall on the all mighty Yellowstone.

This was a workshop full of excitement, beauty, and sheer joy.

Mike, Scott, and the rest of the Aperture Academy crew

If you'd like to join us at one of our workshops, click this link for the schedule/sign up page.