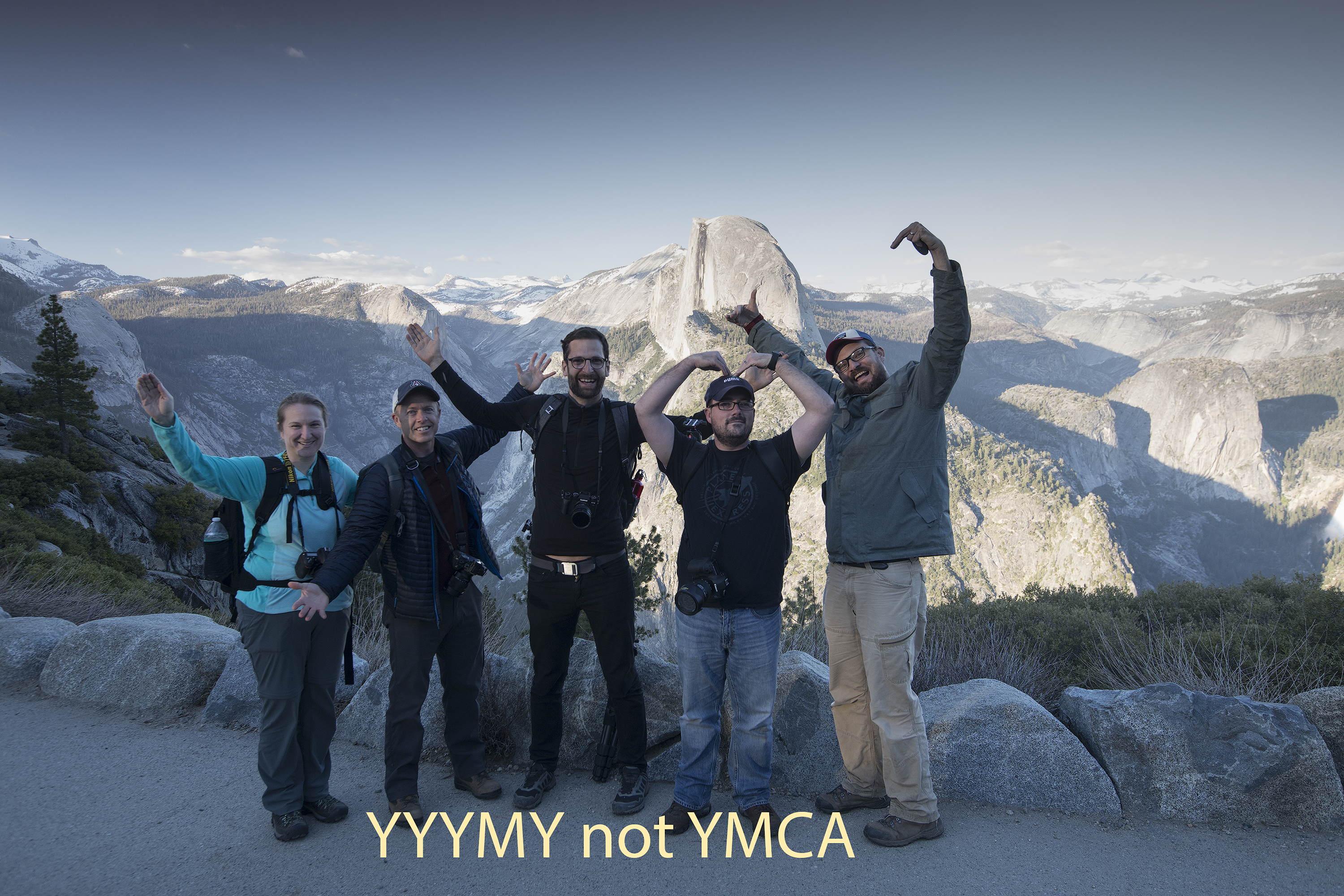 Yosemite has long held a lore when it comes to Photography. In a sense it's one of THE destinations for landscape photography. The park changes dramatically in each of the four seasons, and offers something unique and awesome to point a camera at. I joined a small group of four fantastic photographers for a fun weekend of exploration in Yosemite National Park...AFTER DARK.

We met Friday afternoon for a brief orientation before setting out on our first long night of exploration. Spring has sprung, as they say...and wildflowers and dogwood blossoms are everywhere, looking fantastic. We spent the first part of our afternoon session shooting some wonderful lupine patches near the Foresta Rd. area. Here we worked on composition, simplifying a scene, and repetition of shape, texture, and color. It wasn't a long stop, but it sure was pretty...the smell of these flowers is intoxicating! Our next stop was dinner in Curry Village, and a small wander in the area looking for patches of dogwood blossoms juxtaposed against the wonderful red bark of juniper trees...classic! 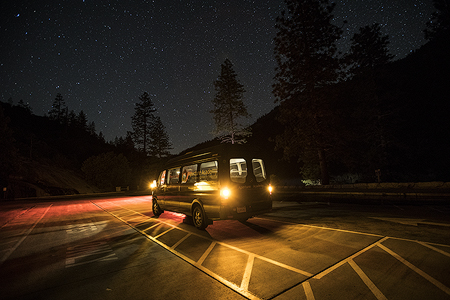 After dinner it was time to get set up for our night shooting. Our first night shoot was Vernal Falls. This time of the month there is no moon to work with so we need to get set up for our main night shots early int he evening so we can grab some twilight images to use later and blend with our star trails. Vernal Falls was absolutely ROARING...and we became aware pretty quickly we weren't going to get very close, and opted for a giant flat rock along the river bank that was still looking up at this great curtain waterfall. There was a bit of mist and wind, and it was cold, but our group endured and we had a fun time laughing and watching the multitude of hikers coming down the trails that night while we sat and photographed star trails, and also some wonderful pin point stars. The techniques aren't too difficult, but practice makes perfect so we made sure to do some pin point stars before we started our trails, and then again at the end....I don't often see night shots from this location, so it was really awesome to be here photographing this location. Once we'd captured our images it was time for a nice hike out in the cool evening air...plenty of millipedes were there along the walk back to make sure we kept an eye on our footing.

It was an after dark class, so of course, we weren't done. We drove up to Tunnel View, one of the most iconic locations in the valley to grab some more star trails, and get the milky way over the valley. We weren't given the luxury of a moon, so we needed to really bump up the ISO in order to see any recognizable part of the valley...but it worked, and again we had files we could use to blend with our star trails and milky way shots. Though we were at a higher elevation, there was no waterfall blowing cold mist our direction, and it was much more comfortable. It was almost 1:30am by the time we arrived back to the hotel...knowing how off the flat light can be during the mid day, I offered the class a go at shooting from 5am-9am in the morning during better light, rather than waiting and sleeping in and shooting in the flat midday sun...to my surprise they all agreed to meet at 5am the next morning, sleep deprived, and without breakfast in order to explore the park during better times...what a bunch of troopers! 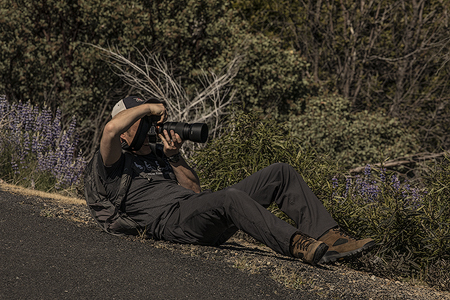 5am comes quickly after a long night of shooting...and it seemed we'd only been a part a short period of time (LOL) before we were right back in the van headed into the park. We spent the morning shooting reflections of El Capitan in the Merced River, and upper Yosemite falls in pools near the swinging bridge. We walked up to Lower Yosemite Falls and captured some amazing light beams in the trees as they permeated the massive amounts of mist coming off the falls. There were wonderful double rainbows popping of the spray as well...if you could find a dry spot, they were a blast to photograph. We also stopped to photograph some great dogwoods sitting over the colorful parts of the Merced. It was a full morning, but so worth the limited sleep. On our way back to the hotel for an afternoon break we saw the onslaught of cars heading into the park for their Saturday....it was MILES LONG. We were instantly reaffirmed that our decision to go into the park in the morning was a good one. Everyone happily returned to the hotel for naps, or a much needed breakfast buffet.

That afternoon our plan was to head back into the park for another night of shooting and another dinner in Curry Village...and while the traffic entering the park was considerably less, the traffic IN the park was like Los Angeles...there were up to three hour delays within the park. This meant we would not make sunset at Glacier point if we went into the park to get dinner. Everyone was starving so we opted to try our luck finding something on the way to Wawona, which was in the same direction as our main stop for the night. Wawona wasn't really great for food, but we did find a market, and everyone made their best attempt at finding something to fill the void. Once our bellies were "full" we set off towards glacier point. On the drive we noticed several cars stopped, and pulled over to see that a couple black bears were having a fun ol' time wrestling in a snow bank...WELL, this was something worth seeing, so we stopped and got out to get some nice images of these two bears from a respectable distance. The bears were more interested in looking for bugs and checking out logs than what we were doing and quickly made their way back into the forest. What a great treat for our group! We made it to Glacier Point with plenty of time to set up for sunset. There weren't too many clouds, so we were confident our star shooting would be great when darkness finally crept in. Sunset was nice, despite the lack of clouds...the eastern sierra always hold a nice glow with the setting sun. Once set up for our last sunset shot, we kept the camera in position for stars. We spent over an hour gathering star trails, shooting pin points, and enjoying the company of each other, and the other photographers in the area. It was a lot of fun. 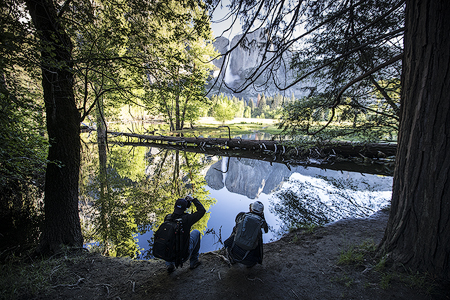 Though Glacier Point was amazing, we still had some time before we needed to get back, so we made another short stop at Bridalveil Falls for some pinpoint star shots...we had to again, boost the ISO up pretty high, but it was fun to see how much a shot can pull out of what looked like a completely dark scene.

The following morning was for processing and everyone was still pretty tired from their previous long night...we made our way back to the hotel around 12:30am, and slept a deep sleep before our processing morning session. Processing is about 25% of a normal landscape image to make it really shine..for night shooting that percentage goes up to about 40-45% It's vital to get the processing part right to get night images that look great. Everyone had some really nice files to work with and I had a lot of fun seeing everyones images, and working with them to get the best out of each of them...it was a gratifying way for the class to see the fruits of their labor. They had put some miles on the ol' odometer in search of an aesthetic image...and I think they all can be proud they came back with several keepers! What a great time!

Until the next one,