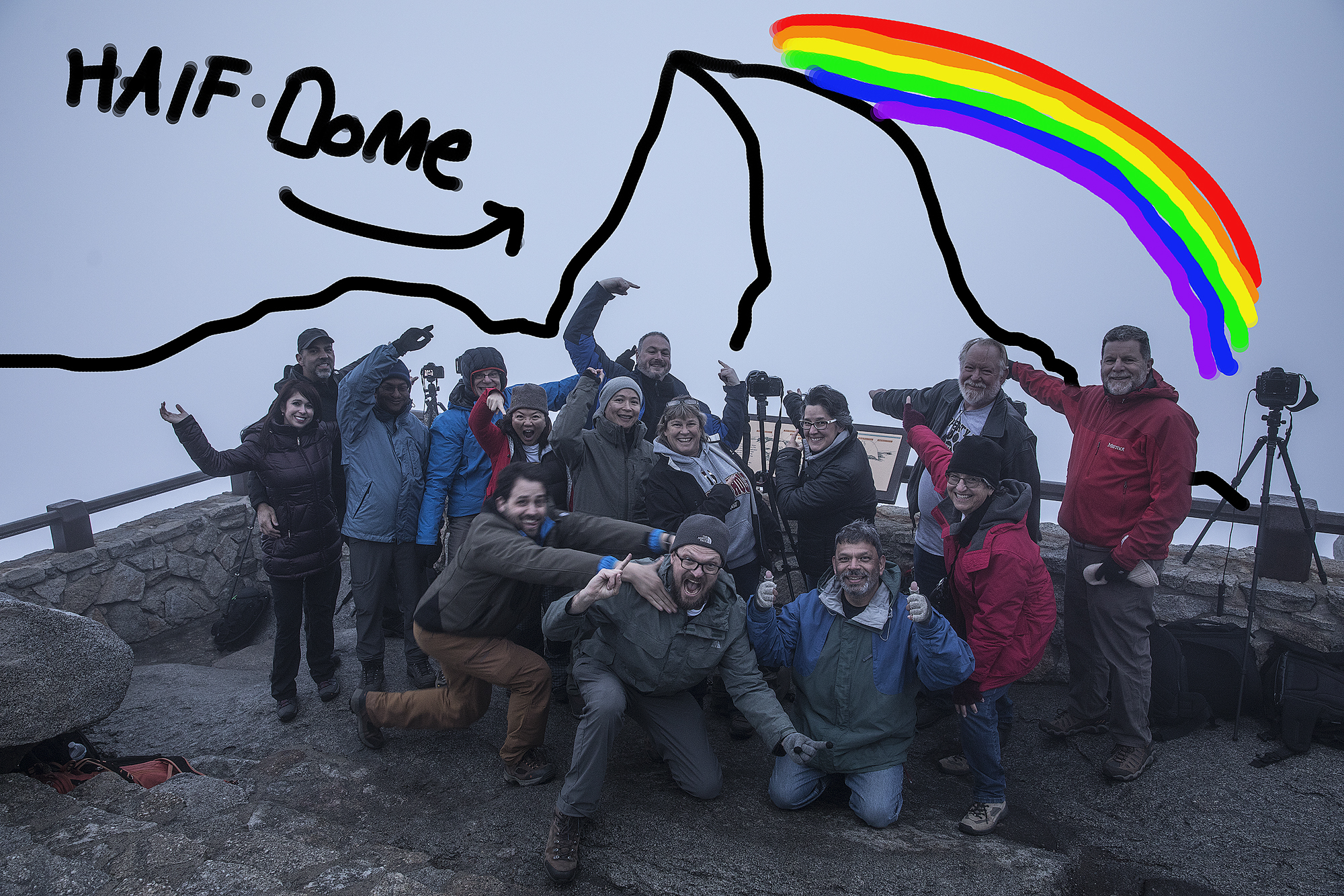 Yosemite is one of the crown jewels of California. Each year it’s getting busier and busier as the world comes to take in the amazing beauty of the towering granite peaks and the roar of the mighty waterfalls. We love to take groups of photographers through the park during some of the most magnificent times of the year. In the spring the falls are roaring with snow melt and the valley is filled with the vibrant greens of new growth. We take our groups out to see this in the daytime, and more importantly, we aim to explore it after the sun drops behind the horizon and the stars come out.

Aron Cooperman and I met a group of 13 awesome photographers for a fun Memorial Day weekend of exploring Yosemite. We met mid afternoon on Friday with the hopes of taking in as much of the park as we could during the late afternoon and night. Unfortunately with nature photography you come to realize very quickly that Mother Nature is always the one in charge. A series of spring storms has arrived in the park, and it’s clear that we’re going to have to take what she gives us.

We make our first stop in the higher country where the dogwoods are in full bloom, and the moody mist of the storm is creating some nice moody scenes. Shooting some close ups of the flowers, covered in water droplets is always fun. The group spreads out and really dials in with the flowers…it’s not an easy place to photograph, but when you focus on the little things, as we do here it’s easy to find something to photograph. 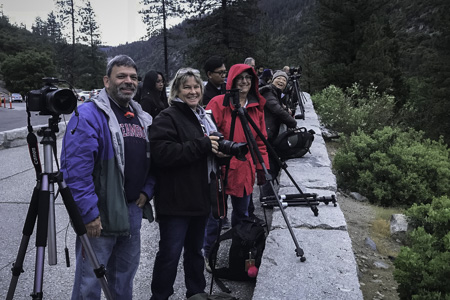 On our way back to the valley we noticed that Bridal Veil Falls was emerging from a shroud of fog…and it is too beautiful not to photograph, so we made a stop, put on some larger lenses, and set off to grab some images of this wonderful scene.

After this we made a stop in the park to grab a bite to eat before our night of photography. The problem with photography is that it requires subjects to photograph…during the day that is a little easier, once the light fades…you need larger subjects to photograph. The storm has dropped down over the valley obscuring every natural icon in the park. The fog was so thick it made it nearly impossible to drive. We opted to try and photograph upper Yosemite falls from the swinging bridge, but the wind and clouds were making the falls look like a smudge on the screens…and clearly this wasn’t going to be the best. Rather than try to get blood from a turnip, we opted to head back to the hotel, and head out in the morning to shoot the valley when the weather cleared.

The morning was beautiful. We danced from the edge of the Merced, photographing El Capitan and the Three Brothers to Cook’s and El Cap meadows photographing the giant granite peaks as they broke free from the fog….it was really pretty. Not a bad way to recover from a shorter previous night.

Our group was a little tired after an early morning shoot, so we went back to the hotel for an afternoon break…the forecast for the evening (depending on which weather app you used) looked like it would be promising for us to finally get out and do some night photography.

After a dinner in curry village, and a little more time spent photographing dogwood blooms, we headed up to Glacier Point, and once again were met with a severe level of fog…but the forecast promised a break around 9pm…and with nothing else to hang our hopes on…we proceeded. We arrived and visibility was nearly zero. We walked out to the viewing platform, set up our stuff, and waited. And waited. Everyone left, and it was only our brave group of photographers, sitting and waiting.

The fog began to break, and before long we could see the beginnings of Half Dome emerging…then soon we had a full visual of the peak…and great clouds covering the valley. It was really awesome. We helped the group to take longer exposures of the peak with the moving clouds dancing around the scene, creating some real drama…it was quite spectacular. Some members of the group took shots of the lights in the valley below with the fog swirling around. It was very cool to see. I really enjoyed the treat nature gave us. 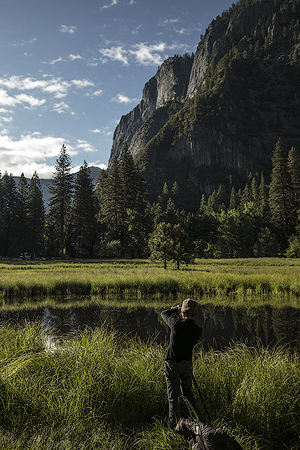 The cloud cover was going to make any star shooting pretty difficult, but the images we got I think made up for it. We had more to see so we set off down to the valley to grab more.

We stopped at Tunnel View, the Chapel, shot upper Yosemite Falls from the adjacent meadow, and hiked to lower Yosemite Falls as well. There were still some clouds in the area, so we weren’t able to really set up for any star trails in most of the areas, but we did manage to get some shots with the pin-point stars in them, and got some really nice moody long exposure.

We made the most of our second night and stayed out until 2am. Everyone was happy, but tired, and we set off to get some sleep before our morning processing session.

Half the fun of acquiring new images is processing them and making them shine. Aron and I both have a lot of little tricks and tips to help make the images really stand out, and it’s fun for us to see what folks have captured, and then give them some new tools to use. We saw some really tremendous images too from the stop shooting Bridal Veil Falls, and from our night up on Glacier Point…right there many people had 2-3 images that a lot of folks would envy in their portfolio. That’s why we always go out…you never know what Mother Nature will give you. Whenever the weather gets brutal…there’s always a break. We found a couple wonderful breaks and had a lot of fun along the way.

Brian, Aron, and the rest of the Aperture Academy Team