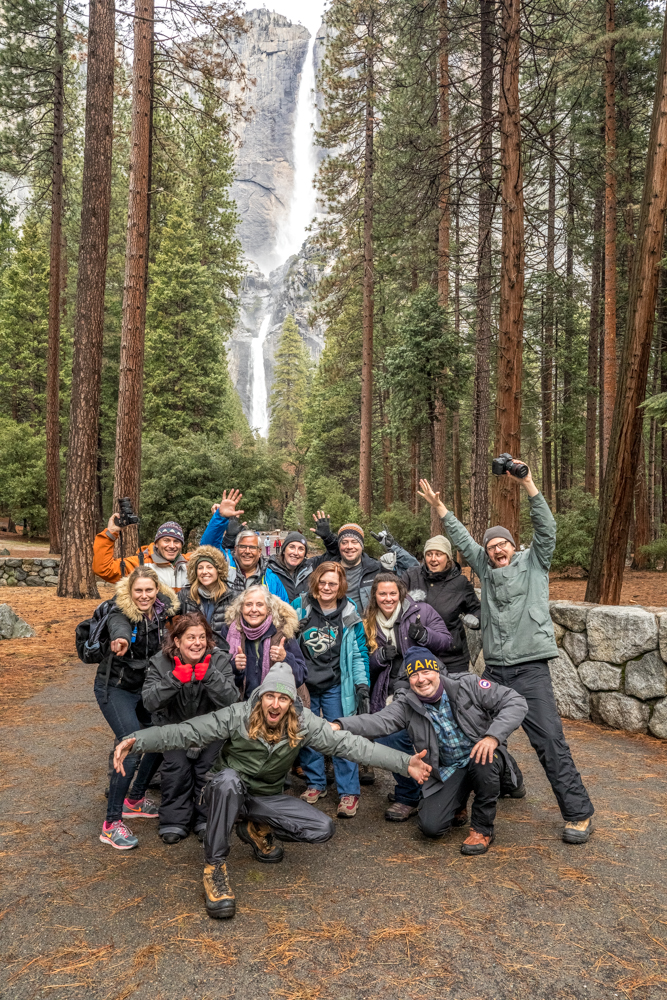 Winter has returned to California, and the Eastern Sierra has once again filled with snow. This means that once again the photographers have gotten excited for the prospect of wintery conditions in Yosemite National Park. The annual February Firefalls madhouse of course always exists, but with the return of true winter conditions, those looking to photograph the park in some of the out of the lesser known spots, again have something to be excited for.

Mike and I met a group of 12 great photographers, some long time ApCad veterans, for a weekend of fun and photography within the park. Weather called for rain, and lots of it. We hoped that with our knowledge of the park, and the hard-core, get it done attitude of our group, that we would still find a great treasure of photographic opportunities to be had. Morning one came quite early and our group was ready and willing to get going. We spent our morning shoot all along the Merced River. The first spot focused on Half Dome...and this rock monolith was just emerging from the fog as we arrived on the scene. The winter snow and rain has filled the river to it's crest, and this made for plenty of spots to find nice reflections and little currents to capture this amazing icon. Mike and I walked the riverside helping the group to get set up in the right spot, checked composition, and helped make sure their settings were correct. The river was pretty dark, so those with filters were encouraged to give those a try to help balance out the exposure, or bring out the reflections.

The morning fog really helped make the mood quite interesting. And low clouds began to break all along the valley, which gave the whole scene more texture and interest. Our second stop was still looking at El Capitan, but also gave the group a little more to shoot in the way of the 3-brothers, and Cathedral Peaks. Again Mike and I were on scene to help find compositional ideas, fine tune settings, and point out different angles people might not have found.

Though the forecast called for rain, there wasn't a drop...and the mood was amazing. We finished up our morning shoot on Swinging Bridge looking at the mighty Upper Yosemite Falls. Scattered clouds and fog kept the falls in and out of view and provided added drama to the scene. There were plenty of puddles and small patches of water to find reflections in as well...it was easily one of the more amazing mornings I've spent in this part of the park. There was no shortage of amazing images to find. With 3 solid stops in the books we made a little breakfast break in the park to recharge our batteries.

With breakfast in the books, it was time to head back to the hotel for a couple hours to break, charge the camera batteries and prepare for our afternoon shoot. On the way back we noticed that El Cap was playing with a cloud bank, and that provided us with another opportunity to head out and get some more amazing light.

The afternoon started at Tunnel View. This vantage point, while easily one of the most iconic in the park also gives us a birds eye view of what the conditions are like within the park...and helps us make the call on where to head for the rest of our night. The light dancing on the face of El Cap and Bridal Veil Falls was great, and the group was happy to set up and shoot for a bit. Half-Dome was hidden within the clouds, and we hoped that at some point it would come out to give our group a chance to shoot this icon. After leaving Tunnel View we made a lap around the park. Large groups were setting up in all of the spots hoping to get a chance to photograph the firefall phenomenon. Mike and I had checked the weather, and forecast was calling for precipitation in the evening, into the morning...we felt very strongly that there was a less than 5% chance of anything happening. While we want our group to get that shot as much as anyone else, we don't want them to sit and waste their photography time for nothing. We made the call to head to Valley View, to get some of whatever Mother Nature threw our way. 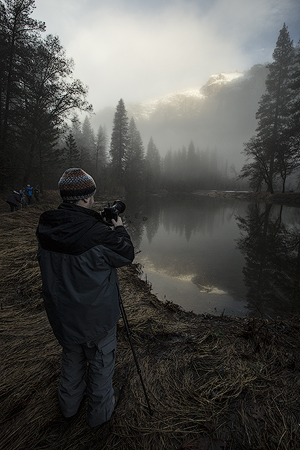 It turns out we made the right call. Cloud cover sat right on horsetail falls for the duration of the evening, and the light, never really materialized the way it needed to for that shot to materialize. We instead had our group working on long exposures and making the most of the nice conditions we did get...and as promised the rain did show up for a bit while we waited. Better to be wet and photographing than wet and waiting for nothing...that's our philosophy!

Day one, though forecast was for rain all day turned out to be amazing, and the whole gang came away with some great shots...what a blast!

Day 2 we started early, and set up shop early on at tunnel view. A great mist had set in the valley, and when this mist comes in...it's best to get up high where you can really make the most of the moody scenes it creates. IT was quite the popular spot! We got in where we could, and given that there was a lot of weather on the horizon...the chances of getting an epic sunrise was very small. Most of the shots to be had were vertical shots of El Capitan, or close ups of Bridal Veil Falls. While the mist danced in and out of the forest we were able to make some nice close up images of the abstract scenes as well....eventually larger clouds rolled in and obscured much of the valley. That was our cue to head down to the valley floor in search of more.

Our next stop was in Cooks Meadow looking at Half-Dome, which had finally come out. Pools of water, and grassy knobs in these small lakes made for some great foreground, and of course some nice reflections...Mike and I helped with the settings and pointing out the different views. By this time everyone was pretty well dialed in with the settings, it was just a matter of helping them to find as many things as possible to point their cameras at. Lower Yosemite Falls was closed due to damage on the bridge, but we were still able to get nice shot of this falls, and the upper falls from the walkway in. We had the group experimenting with different exposure times, and working on using the tall ponderosa pine trees on either side of the walkway as frames for the great view of the falls. 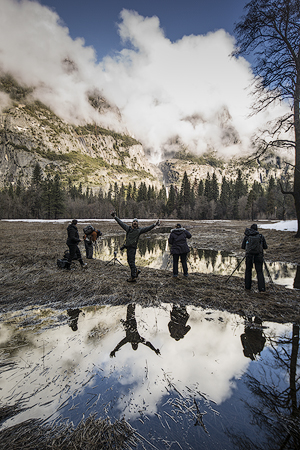 Funny how we're always ready for breakfast! Time flies when you're shooting a lot...and we were right there in the same parking lot...so might as well! After breakfast it was back to the hotel for a little break, and then a couple hours of processing. I think for us as leaders, it's always the best seeing all the awesome shots the group had come away with and then helping them to maybe fine tune their compositions as well as bring out some of the best in post processing. These programs we have available to us are just amazing in what they were able to do. This group in particular had a lot of fun with the dehaze filter.

The afternoon and evening called for more rain, but we're not scared of a little moisture! We set off back into the park looking for subjects that we could shoot rain or shine...believe it or not there were still people set up looking for that horsetail falls shot. LOL.

We decided to set our focus on Bridal veil Falls. We first had the group shoot it from across the river where the whole falls are visible...what we were really excited about showing them were the creeks on the other side. Near the base of the falls a few areas exist with nice open shots of the 'S' curves in the creek, and lots of nice mossy trees. This put us out of the rain, and gave us some nice intimate scenes to photograph...much different than the larger more iconic scenes we'd focused our lenses on earlier in the day. Everyone really seemed to enjoy the change up, and we saw some really great little scenes on the cameras.

Time does fly, and before we knew it our time was drawing to a close. We made one last stop at Tunnel View to say goodbye to the valley, and let everyone point their cameras at the weather overtaking the valley. Snow was on the forecast that night, and we could feel the drop in temperatures almost immediately. The weather was supposed to have really put a damper on the weekend according to the folks at the hotel, but like we always do...we find a way to make the most of it..and eventually Mother Nature gives up trying to thwart us, and gives us some pretty epic conditions from time to time...

Brian, Mike and the rest of the Aperture Academy Team!