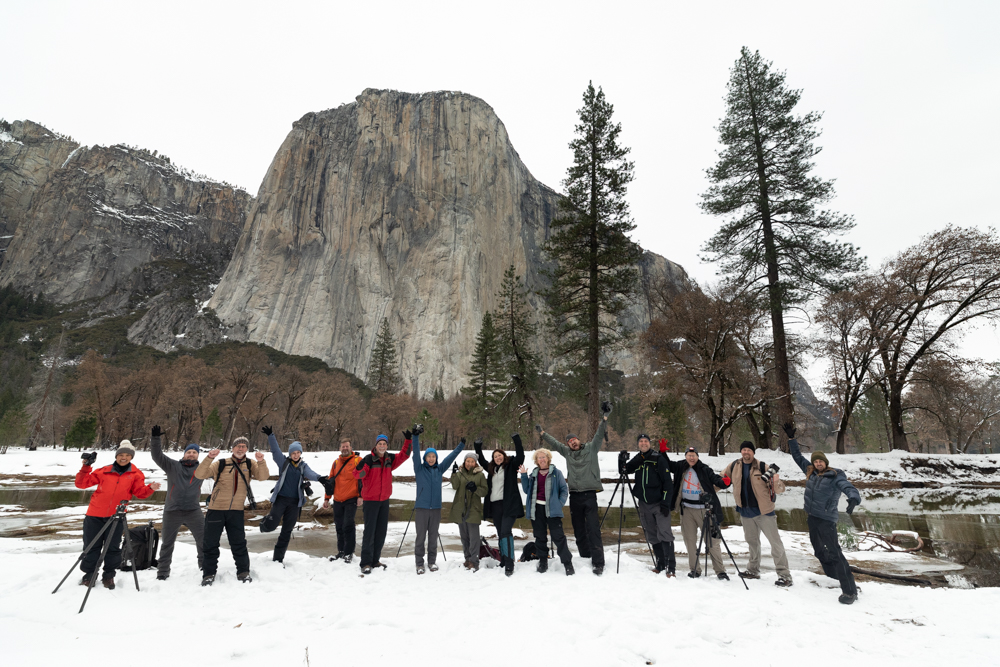 Yosemite in the middle of February has turned into a madhouse. Several years ago, the late Galen Rowell, a popular landscape and travel photographer made an image of a very seasonal waterfall being illuminated by the last rays of the setting sun. This waterfall is called horsetail falls, and as digital photography grabbed hold of the world it wasn’t too long before folks started to replicate this photo for themselves…and every year a few photos of the event will pop up around the internet, go viral, and then the week that follows brings more and more folks to the park to try to capture their own version. A low water flow, and lack of good light the previous year only built the hype for this years’ event. Recent snowfall in the valley further increased the excitement and as our second Yosemite workshop rolled into the park…there was a very palpable excitement brewing to see this firefall.

The snow had let up a little, and our group was able to get into the park quite easily…as is our custom we head to Tunnel View on our mornings to check the valley, and see what Mother Nature is throwing out in terms of cloud cover, fog, and possible light. A clean, sky awaited us when we arrived, and the temperatures were well below freezing…it was COLD. Our group, bundled and determined lined the wall and set to shooting some nice silhouettes of the famous Yosemite skyline. 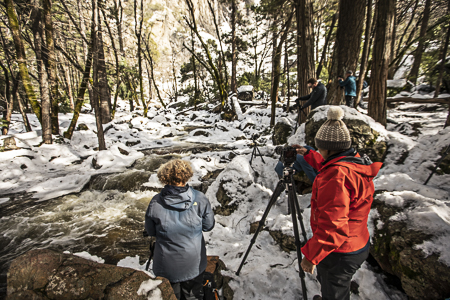 Given the level of cold in the park, we opted to leave tunnel view pretty quickly and head down to the river level to look for ice patterns and shoot some reflections of the mighty granite peaks. Our luck paid off and our favorite “two trees” lot was empty and we had the riverside almost all to ourselves to shoot reflections, and abstractions of the wonderful ice that had formed over the previous night.

From there we moved off for breakfast and a short break at the hotel to warm up, charge batteries, and get ready for our crazy night of trying to shoot the Firefall. Friday night had been an amazing show by the waterfall, but not everyone in our group was able or knew how to get that shot…so we always like to try and make one go at getting this iconic image if conditions looks favorable.

This was by far the most people I’ve ever seen photographing this natural phenomenon. I would guess that in the 5 or 6 prime viewing areas for the falls we had well over 2,000 people with their cameras pointed to the waterfall…waiting. The show wasn’t quite the level of the previous night, but there was still some great golden light on the falls…and everyone was very pleased with the images they had captured. 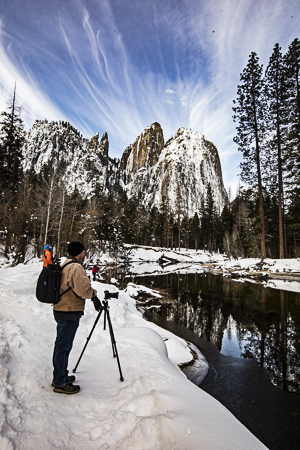 The next day we sat to trying to get some of the more iconic images. Our clear skies were replaced by cloudy skies…this warmed up the temperatures a little, and gave our images some more textures to shoot. Our next spot was again down along the Merced River looking up at the mighty El Capitan. This area doesn’t get a lot of direct sunlight, so there was plenty of cool ice patterns to help our compositions and provide great leading lines.

We spent our afternoon doing a little bit of processing and looking over some of the fantastic images the group had captured thus far. Some really original and unique images! Our afternoon we set up at Bridal Veil Creek and shot some great abstracts of the moving water, as well as some dramatic shots from the base of this mighty waterfall. The late afternoon light really put a nice mood on everything.

Our sunset we spent shooting Half Dome from a variety of location in and around Cooks Meadow. Half Dome was out and plenty of wispy clouds danced in and out around the face providing great warm light to the scene, and reflecting nicely in the various water features that had formed from the melting snow. It was a really nice way to end a really fun weekend exploring some of the wonderful areas within Yosemite National Park!

Brian, Mike, and the rest of the Aperture Academy Team!