The 2009 Yosemite Winter Photography Workshop was a huge success! Conditions could not have been more perfect. There was still a good amount of snow in the park, yet it had been clear for a couple of days so the roads were easy to travel.

We gathered Friday night for orientation and the group got to know each other a little bit. We reviewed the itinerary and discussed where and how we'd be shooting for the weekend. 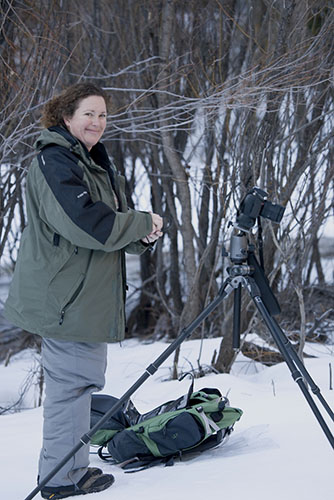 At 5am Saturday morning, we headed from the lodge into Yosemite Valley, to our first shooting location. At that early start we were able to get setup on location and greet the rising sun. We chose a half frozen pond in the middle of the valley for our first subject. It had some amazing ice formations and grass tufts that were covered in frozen dew. The ice crackled under foot as we hiked out into the field. It was amazing to see, and even better to photograph!

As the dawn light intensified, we captured reflections in the ice and the surrounding glassy waters. The warm sunlight provided some nice early morning colors, and with the water so silent and still, the reflections looked as perfect as a mirror. 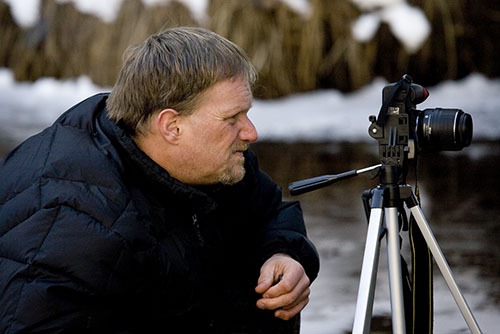 After a short while, we packed up and moved down the valley to another location, to try and capture reflections of the famous granite peak, El Capitan. By now the sun was producing very nice colors off the rock face, and we were able to find some nice foregrounds to enhance the composition. 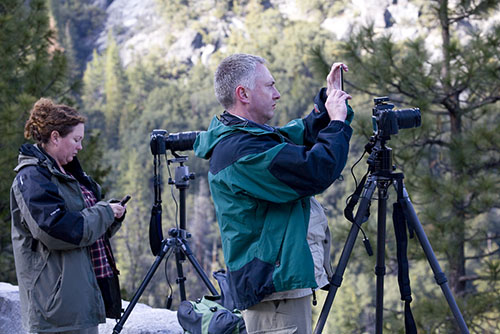 At this point, the coffee addicts had taken control of the schedule and we made our way to the deli for some coffee...and to warm up.

After the refreshments, we headed back. From the valley floor, we made the short hike to the base of Yosemite Falls. This was a great opportunity to work with neutral density filters, to help control the bright sunlight and get balanced, longer exposures for creating some nice effects with the water. Everyone enjoyed the view from the base of the falls while they learned how to best control exposures.

By the time we finished at the falls, everyone was ready for lunch, so we returned to the deli for an hour of downtime, to eat and thaw out once again. 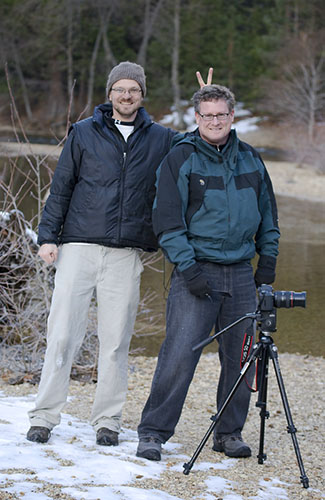 Following lunch, we headed to higher ground, to a place called, "Inspiration Point," also known as "Tunnel View." We arrived to warmer temperatures and one of the most amazing views on the planet! There were no clouds in the sky, so we used the opportunity to learn how to control bright skies with filters. We also went over how to take multiple exposures, giving a variety of captures from which to choose the best version later.

As we made our way back to the valley floor, we wrapped up the day at "Valley View," a famously iconic location that includes El Capitan and the snowy winter banks of the Merced river.

It was after sunset when we returned to the lodge. We set up a laptop with a projector, and spent about an hour demonstrating some Adobe Photoshop post production work. It was a great time to see the various ways to process photographs, and share how to make simple enhancements that could draw out the best in the images we had captured that day.

Sunday morning, after a bit of a hiccup from the daylight savings time change, we arrived in the park and started our shoot at the Yosemite chapel. We practiced some tripod mounted long exposures in the dim morning light, which everyone seemed to to enjoy. We then made our way across the snowy, fog-covered field to the river where we found some nice mirror-like pools of water that allowed us to capture upper Yosemite Falls reflections. We used logs as leading lines and a nice rustic looking bridge as elements in these images. It was a great spot!

We spent the remainder of the day in the valley shooting along the river, and ended up at the east end of the park in the late afternoon. We took a quick group photo and then continued on to photograph one of the most iconic rocks on the planet, Half Dome!

After Half Dome, we made our way to the base of Horsetail Falls, in hopes of some late day light that would illuminate the falls with a nice warm orange glow. Fortunately, we did get some color, so we fired off a few shots and quickly made our way down to Valley View for our final shooting location. The sunset was very nice, and for an added touch, the nearly full moon was rising over the peaks, which added a nice element to the partly cloudy pink and orange sky.

This was a great workshop with some really great students. We had a diverse group with a wide range of skill levels, and some very funny people, too. Everyone got along really well and we laughed a lot. However, my apologies to Travis, who for some crazy reason I insisted on calling "Patrick." I'm bad with names, but wow!

It was a great way to spend the weekend! We were taking photographs in one of the most amazing places on the planet with a group of people enthusiastic about learning and sharing their passion for photography.