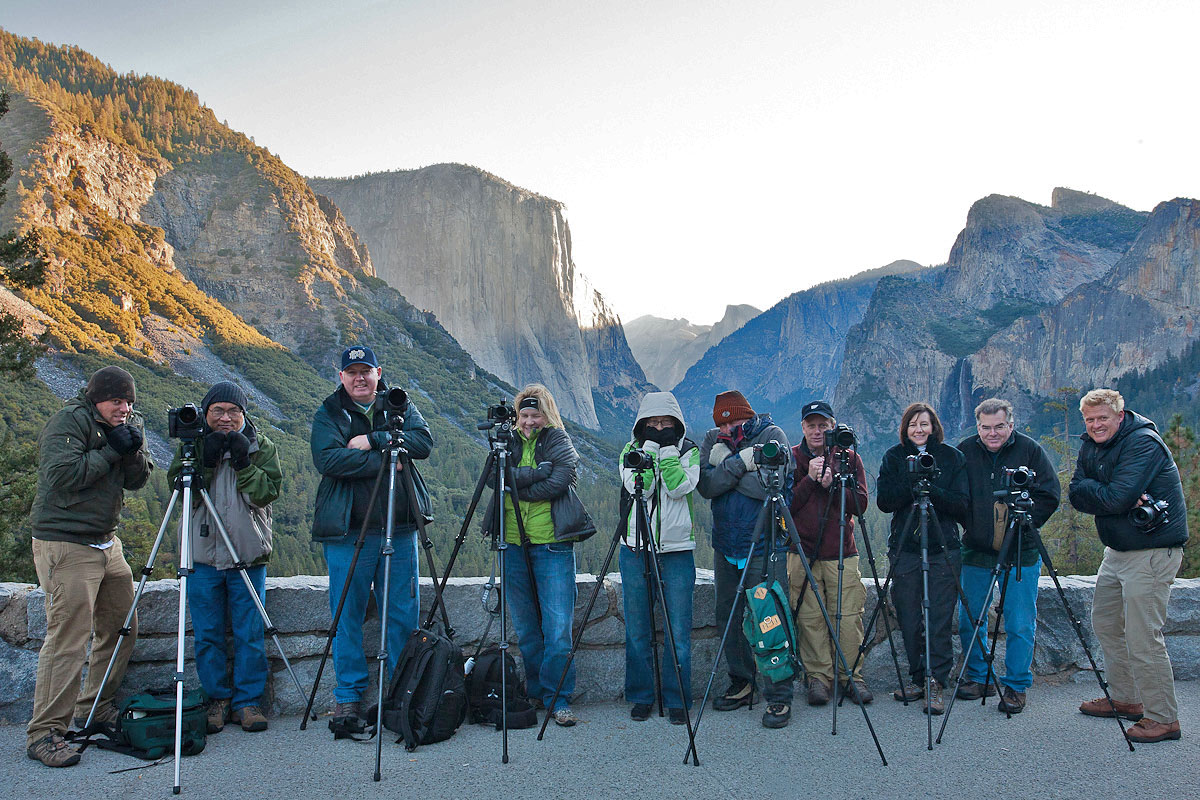 No matter how many times one visits Yosemite, there's always something new to see. Although Aperture Academy visits this grand dame of National Parks multiple times throughout the year, it's hard to grow weary of its awe inspiring grand vistas, tree lined alpine lakes with crystal clear landscape reflections or the enormous iconic granite peaks that rise near vertical 1000's of feet from the valley floor. If Yosemite doesn't move one's photographic soul, perhaps professional help is needed :) This seemed to be the consensus of our group of eight intrepid photographers as we gathered to watch the sun set over one of Yosemite's most dramatic vistas but more on that later.

On a beautiful fall Friday night that saw the St Louis Cardinals win the World Series (go Cards), eight enthusiastic photographers gathered together for orientation. As we looked around the room, we couldn't help but notice all the familiar faces. Aperture had conducted a Yosemite workshop the previous week with about half new clients and half returnees but this workshop saw 100% participation from clients that had all been on previous field workshops. This may have been a first which was really cool. On all our workshops, we love to see the sense of camaraderie that forms over the course of the workshop but already knowing everyone and their personalities, we knew this was going to be walk in the park, so to speak. Instructors Scott Davis and Scott Donchikowski went over the itinerary for the next two days which promised to be a full weekend of photographic fun.

An early wake up the next morning had us departing at 05:30. Ahh, such is the curse of the landscape photographers, always running to catch the morning light. Sleepy eyed we all piled into the ApVan en route to our first destination, a high alpine lake known as Lake Tenaya. With its stark granite features and fantastic opportunities for reflections, Lake Tenaya is one of our "off the beaten path" favorite spots in Yosemite. The shoreline is literally filled with endless opportunities for great foreground, and the granite walls and forest that surrounds the lake makes for an equally dramatic backdrop to the scene. The two Scott's worked with students on helpful techniques for finding eye-catching compositions, tools and how-to's for determining optimum exposure, filter selction and proper use and adjusting white balance to help create interesting and different images. The best part was that we had the entire area to ourselves. In the quietness and remoteness of the area, we were free to wander unperturbed as images presented themselves to us. We spent well over an hour photographing the scene, and the instructors were very pleased with the enthusiasm and willingness to learn that the group demonstrated. 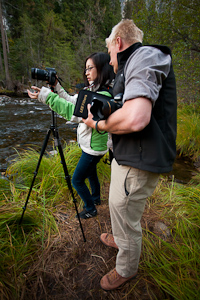 Following the morning sunrise at Lake Tenaya, we regrouped and made our way to Olmstead Point. Olmstead Point is a massive granite outcrop with distant views of Half Dome. Accessed along the Tioga Road, the Point looks down on Yosemite Valley from the east--and from a very different angle. Though you might not immediately recognize Half Dome, it is one of the most prominent peaks you can see from Olmsted Point. With its cracked granite lines providing strong leading lines, distant vistas and unique views of Half Dome, it's a fantastic locale to work a variety of compositions. Another hour passed before we knew it so with the sun rapidly climbing in the sky and starting to wash away all the prime light, we bee-lined it for one more morning stop before our mid-day break.

Siesta Lake is a small little alpine lake, a fraction of the size of Lake Tenyaya but makes for an ideal spot to capture mirror reflections and fall colored foliage, It is a place to concentrate on the smaller little jewels that Yosemite has to offer. Yosemite's crown jewels were yet to come. Hopping back into the ApVan, we made our way back to the lodge for lunch and a much appreciated siesta while the harsh midday sun hit its zenith.

Yosemite has its share of spectacular and world famous sights. Since the morning was spent exploring some of its slightly lesser visited but still scenic sights, afternoon and sunset would be spent shooting some of the most jaw-dropping, oh my gosh spots in the park. Without fail, the route to Glacier Point always illicits a compendium of "Oh My's, Holy Moly's, Wow's, Oh Sh%t" and other expressions not deemed family friendly. This not only holds true for first timers but also for long time Yosemite veterans. There's a reason that visitors come from all over the world to behold the geological wonders of Yosemite. Only a few places on the planet compare in all out, grand splendor. After a brief visit to Tunnel View (since we would be shooting morning sunrise here) we made the serpentine trip to Glacier Point, a place immortalized by master photographers such as Ansel Adams, Charles Weed and Galen Rowell. 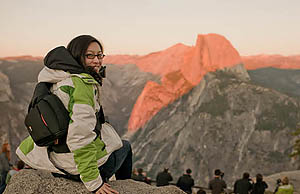 We arrived in plenty of time to stake out our prime photo claims. One of the nice things about arriving at this spot with some time to spare is that it affords us the luxury of not only getting a good spot but more importantly, to bear witness to the slow but beautiful transformation of light on the distant peaks. Each minute that goes by brings subtle differences. Working with various filter, white balance and exposure combinations, everyone was able to capture some beautiful images even without big puffy clouds on the horizon. Even when the masses were leaving following sunset, we stayed a bit longer to draw out the last of the post sunset colors that almost inevitably show up in long exposures but often difficult to see with the naked eye.

It had been a long but highly productive first day. CF and SD cards full, but bellies empty, we made our way back to the lodge in the dark for some dinner and a well deserved night of rest. Next day, we'd be right back at it. 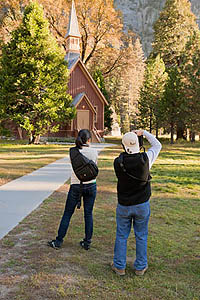 On this day we gave our students a little more time to sleep in before the days activities and had a meeting time of 6:00am. We got on our way once again in the dark to our sunrise spot at the ever majestic Tunnel View. The Tunnel View vista is an elevated photographic overlook with views of nearly the entire Yosemite Valley. We were once again first on scene and rapidly had everyone claim their spot in the best vantage points for the sunrise. Working with graduated filters, Scott and Scott hopped from student to student explaining the importance of balancing exposure for the scene at hand as well as bracketing for the harsh light and extreme shadows. Soon the light became too intense and after a quick group shot, the class was off to find some much needed coffee.

On the way to the Yosemite Village for some warm breakfast, a rainbow had become visible on the water of Upper Yosemite Falls, so the group put off the morning break for a few minutes to capture this unique phenomenon. The scene was perfectly framed between two evergreen pines and the sky was a gorgeous blue unfettered by haze or contrails. The cold however crept in our students, and with the rainbow ever fading we packed up and headed for breakfast.

After a much needed warming up with pancakes and eggs and coffee, the group trailed back to park entrance and stopped off the road to shoot some of the Merced river rapids. The lines in the scene formed some amazing compositions with the fall color in full tilt and the valley walls as a backdrop. We spent a good hour there by the river, everyone trying different vantage points, of which there were many. Scott held back some distracting shrubs, while the other Scott worked the team on interesting compositions. The use of filters once again became an area of learning as the two Scotts doled out neutral density filters to slow down the action of the river and highlight the "S" curves the river carved over the rocks. 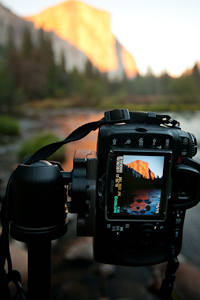 Our second break of the day came at the hotel, where everyone began to pack up and check out before we headed out again for our late afternoon and sunset shoot. Both Scotts were on hand in the hotel lobby for some impromptu Photoshop and Lightroom lessons before the gang packed up once again for the final trip into the park.

The first stop was at The Swinging Bridge, which is a well known spot for capturing some reflections of Yosemite Point in the calm curves of the Merced river. The group fanned out to find their ideal spot along the river, which has vantage points that work well for both portrait and landscape shots. The light in the afternoon sky was throwing some amazing yellow hues across the entire Yosemite Valley which worked well in students favor to capture some ideal fall tones with upper Yosemite falls as a highlight element. Our next stop was the little Yosemite Chapel. Nestled in small section on the valley surrounded by trees and sheer cliffs, is the small little red chapel that somehow is perfectly picturesque against the granite Yosemite Valley. We worked on compositions and abstracts before it was time to pack it up once more for the last stop of the weekend.

Our sunset spot for the last day was at the ever popular and beautiful, Valley View. It is a very similar spot to Tunnel View, except Valley View is on the valley floor with the Merced river as a foreground element. Our students eagerly took positions along the rocky banks, and the Scotts jumped around and helped with composing shots, trying to get that perfect composition with the right amount of rocks, river, mountains and sky. There we waited for the magic hour, in which the sun eclipsed the horizon behind us and the valley in the background was in full alpenglow. With our students firing their last shots of the evening, the light faded and we all packed up in the ApCab for the short trip back the hotel. With handshakes, hugs and goodbyes, Scott and Scott bid farewell to our intrepid group and a final farewell to the Yosemite Valley. Thank you to all of our amazing students!

Scott, Scott (yes we have two!) and the rest of the crew at the Aperture Academy.